I'm one of the lucky few to benefit from Google Fiber's recent expansion into new regions (before they nixed the whole thing). I've had the service fire three months now and figured I should write up my experience with it thus far.

Google Fiber announced that it would be expanding to the Raleigh-Durham metro area, known locally as "The Triangle", in January 2015. It's been a long game of hurry-up-and-wait since then, watching crews laying fiber all over town without hearing a peep from Google regarding availability. But in the fall of 2016, people were finally able to start signing up for service. Here's how my installation went.

Google Fiber registration opens! I sign up for service and pay a paltry $10 deposit, which gets credited toward my first bill. Over the next couple weeks, various utilities swing by to mark their lines in the ground. (Here's the color code for utility markings in the US, if you're curious.)

Google's contractor arrives on site to lay fiber from the curb to my house and to many of my neighbors' houses. Surprisingly, they cut my trench by hand, possibly due to the steep incline of my side yard. 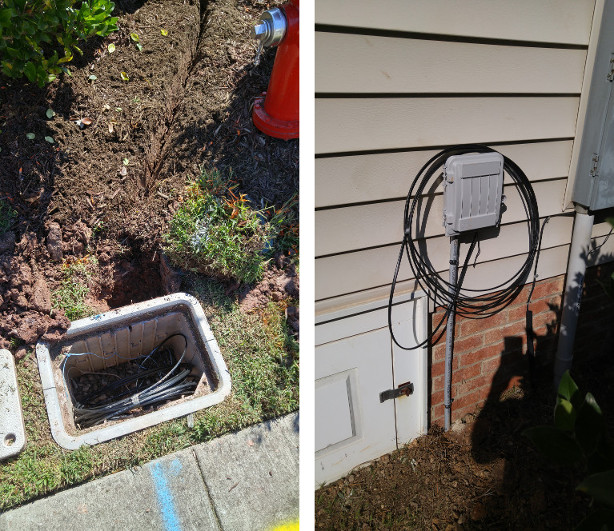 The outside installers ran a single pair of fiber to a box mounted on the side of my house, with the remainder of the installation to be completed by the indoor tech. (As with Verizon FiOS, only one strand is needed for service.)

I receive a notification to schedule my installation. Of course, I pick the first available slot: 9:40am on October 3.

In the Raleigh area, Google contracts with a company called OnePath for residential installation. (Their techs drive Google Fiber-branded trucks but work for OnePath.) The installation tech showed up right on time and got to work.

The most involved part of the installation was running a fiber patch from the box on the side of the house into the crawlspace and up through the floor. The fiber patch is plugged into the ONT, which is about the size of a standard US electrical outlet and mounts neatly in the wall. 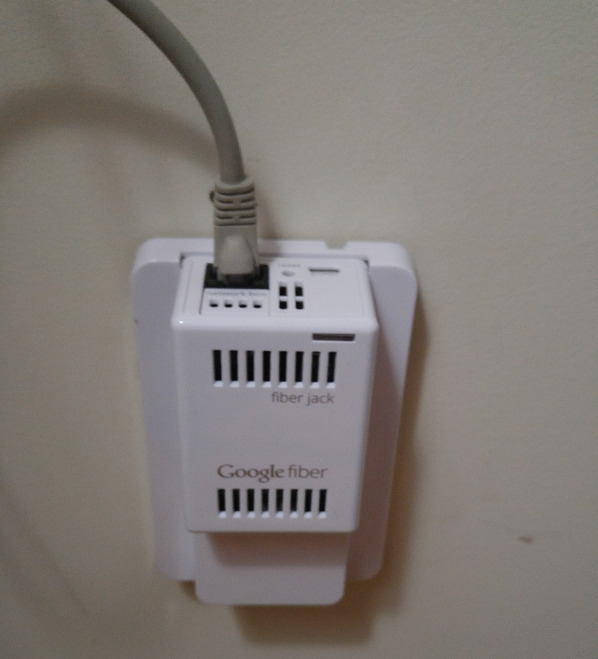 The ONT gets its power via PoE from the network box. I believe it can also be powered via USB if PoE is not available.

Once the ONT was installed, the tech set up the combination network/DVR box, as well as a TV box for each TV and a phone box (which is essentially a hardware Google Voice client) for my home phone. Google's hardware is refreshingly modern in size and design, a stark contrast from my old Scientific Atlanta box provided by Time Warner Cable, shown here for scale. 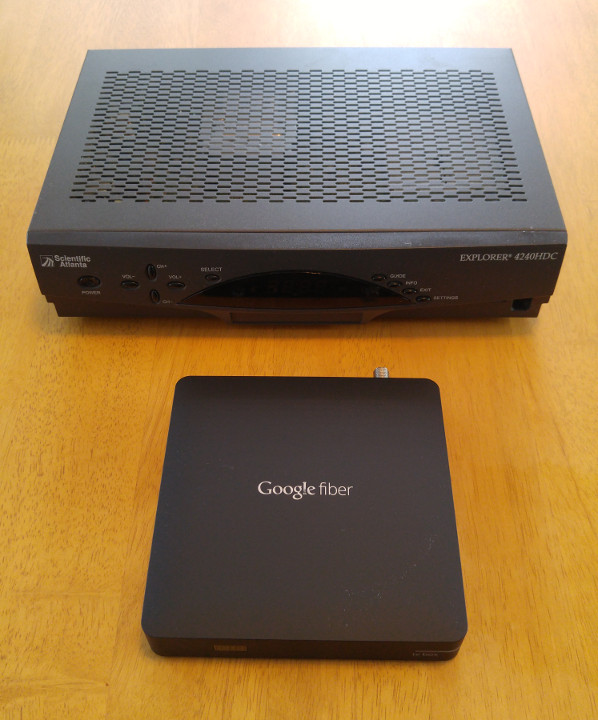 After relying exclusively on Google Fiber for Internet access and TV for three months, I'm fairly happy with the service. The main draw of Fiber is, of course, 1 Gbps connectivity up and down, by far the best level of residential service available in the United States. But, practically speaking, there isn't any noticeable difference between a 1 Gbps connection and a 100 Mbps connection for 99% of what you'll do with it (even for a work-from-home power user like myself). Perhaps the biggest benefit is the effectively unlimited upload speed, which is where asymmetric broadband services still lag far behind.

Running speed tests can be fun, but at 1 Gbps it can actually be difficult to get accurate results: The load on and connectivity to the speed test server become significant factors. I can fully saturate the uplink of a remote server connected at 1 Gbps, for example, so any tests that happen to be running in parallel to mine will degrade my throughput. Results from sporadic testing have varied widely and randomly, but tests to DigitalOcean's NYC2 site (where we peer directly with Google Fiber) have typically shown speeds of around 700 Mbps down and 900 Mbps up. 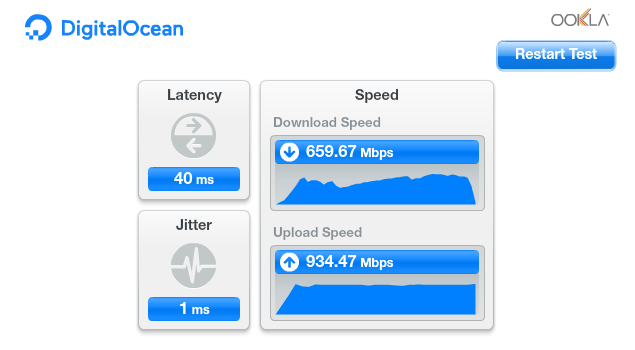 The IP I've been assigned by Google Fiber is part of 136.32.0.0/11, an enormous block which seems to cover most of their customer base. For the first month or two, I and many of my neighbors noticed strange geolocation issues. Amazon, for example, geolocated me to Dearborn, Michigan. Most of the major databases have since been updated, but at the time of writing IP2Location still pegs me as Kansas City, Missouri.

Several of my neighbors have complained about wireless connectivity since switching to Google Fiber. Most of these issues are wholly unrelated to the Internet service itself, but I suspect many stem from the TV boxes. The TV boxes can optionally function as both MoCA bridges (limited to 100 Mbps Ethernet) and wireless access points.

This is a neat idea, unless you have enabled wireless on two or three of them and they're all competing for space. It's also important to realize that wireless throughput will be limited by the MoCA connection to 100 Mbps. By default, the wireless radio on a TV box is set to "auto," which suggests that it's periodically turned on and off to see if it improves access for wireless clients. I've disabled wireless on both of my TV boxes.

My only complaint regarding the Internet service — and it seems to be a popular one — is that Google effectively forces you to use the router they provide. Unlike a cable modem, Google Fiber's network box cannot be configured to function as a bridge in front of customer-provided gear. I had intended to continue using my Ubiquiti EdgeRouter that I had in place with my old cable connection, but haven't yet gotten around to setting it up. A few people have written blog posts explaining how to replace the Google Fiber box with an Ubiquiti router, but I don't want to ditch it entirely as the box also functions as a DVR.

The TV service is, of course, entirely packet-based, delivered in-band with Internet traffic. Interestingly, live content is delivered via a TCP session formed between the TV box and the router/DVR. My guess is that the router subscribes to the appropriate upstream multicast groups for whatever channel(s) are being watched locally, and proxies the content to each TV box via a unicast connection. (Again, this is only a hypothesis, not something I've been able to confirm.) Why unicast TCP instead of multicast UDP? Maybe the architects were concerned about multicast working across unknown residential network devices, or they wanted to leverage a small amount of buffering to guard against packet loss. At any rate, the router/DVR seems to play a central role even when watching live TV.

Here's another weird aspect of the network box that I found particularly off-putting: It is managed not through a local web interface as we've become accustomed, but through a remote portal to which it phones home. You have to connect to a remote server to configure a local device (similar in concept to a wireless LAN controller, I suppose). Connecting to the box itself at 192.168.0.1 provides only a diagnostic page: 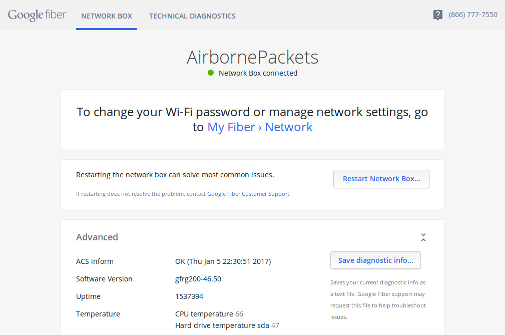 All network configuration is performed through the disappointingly oversimplified Google Fiber portal: 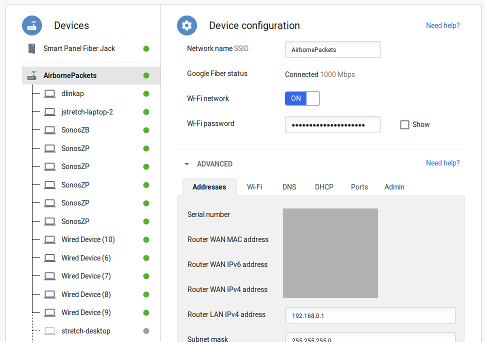 While I can see the appeal of such an approach from a support standpoint, it's a bit too restrictive for my taste. I hope to get my EdgeRouter in play soon, and will be sure to write another post detailing how it goes.

What's the over/under on IPv4 vs IPv6 speed and ease of use on google fiber?

Does the cable box come with an rf remote?

Nice post. Looking forward to your follow-up on getting your edge router in play. Thanks!

Interesting perspective on google's resi fiber solution, particularly that you see little difference between it and the widely available 100 mbps down service available from CLECs or Verizon. Happy new year and enjoy your god tier FTTH.

Any idea what flavor of PON Google is deploying in the Triangle?

Any concerns about service degradation as more ONTs are activated on the same fiber loop in your neighborhood?

I don't know whether Google remote management uses it, but it seems like TR-69 is fairly popular in this space. U-verse VDSL modem-routers use it, for example.

Great read and thanks for sharing!

I got Google Fiber in Morrisville on Nov 16th. My biggest issue with it is the router. It is very basic. I would like to be able to setup some VLANs or something.

We are soon to be relocating to either Cary area or North Raleigh. I'd really like to have Google Fiber. Do you have any guidance on places to look over others? I can't find much online about where they are presently located/expanding to. Thanks!

interesting that it geolocates to Dearborn. That IP range is really close to Ford's.

FYI, that's a remarkably similar management style to Meraki devices as well. Logging into the local interface only provides you with IP/gateway/etc options; everything else is managed by going to your Meraki cloud portal. As frustrating as it can be for CLI folks, it does (in the Meraki world, at least) provide for some cool tricks like remote packet captures, shared provider/customer access views, and more.

Interesting to see. I almost went to work for them in Austin when they first started up.

The ONT appears to be the same one they installed in the Austin City Hall MDF for the supplied Free connection.

Great text!
He explained me a lot Thanks!

Great read! Being based in the UK means I can't check Google Fiber out myself. Lots of good and useful information here.

A good read, with that said could you see yourself switching back to the previous provider given some of quirks Google has?

I've just moved to Huntsville Alabama, where my neighborhood is getting "the email" as of today. Got mine and got the ball rolling. I know it has been awhile since this review and technology moves quickly, but I think you really helped me to get a handle on some of the hardware questions I was having. Thanks for a great review!