NetBox is now available as a managed cloud solution! Stop worrying about your tooling and get back to building networks.

Update: NetBox has been released!

Several years ago, I lamented the few options available for a provider-grade IPAM solution. Specifically, I explained why building a custom application would be undesirable:

Could I create a custom IPAM solution with everything we need? Sure! The problem is that I'm a network engineer, not a programmer (a natural division of labor which, it seems, is mostly to blame for the lack of robust IPAM solutions available). Even if I had the time to undertake such a project, I have little interest in providing long-term maintenance of it.

But I suppose time makes fools of us all.

Nearly one year ago, I started developing an IPAM application as part of my day job. Leveraging my experience with the Django Python framework, I had a working proof-of-concept in just a week. Over the next several months, the project grew more mature and began to take on additional roles: data center infrastructure management, circuit tracking, and credentials storage. Today, the tool functions as our "source of truth" for many aspects of our infrastructure. We call it NetBox.

NetBox is a web application for IPAM and DCIM. Its target audience comprises network engineers, data center techs, and systems administrators. NetBox is written in Python, utilizing the Django framework and a PostgreSQL database. Similar applications include:

NetBox was developed to provide features not found in these tools, with several guiding tenets in mind. 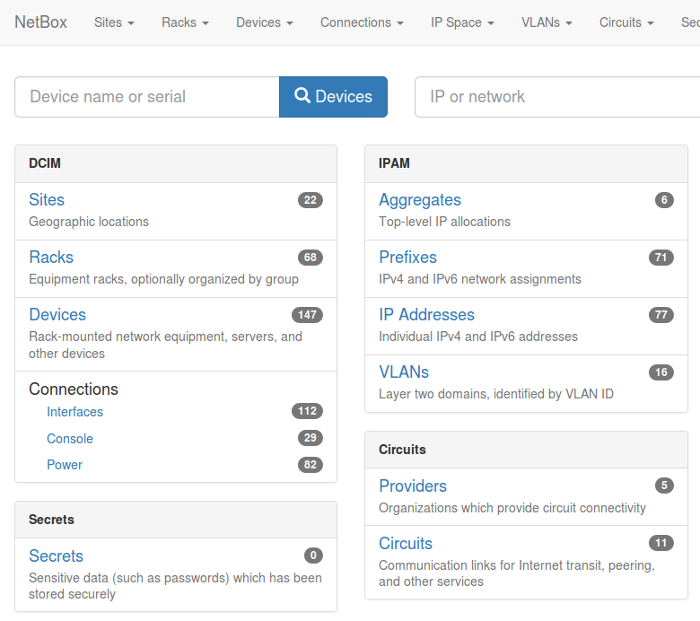 NetBox's data model seeks to replicate the real world as closely as possible. For example, many tools require that you define exactly one IP address for a device. But that's not how the real world works: IP addresses are assigned not to devices but to specific interfaces within a device, and interfaces may have multiple IP addresses. NetBox was designed to minimize the degree of abstraction needed to represent a real network. 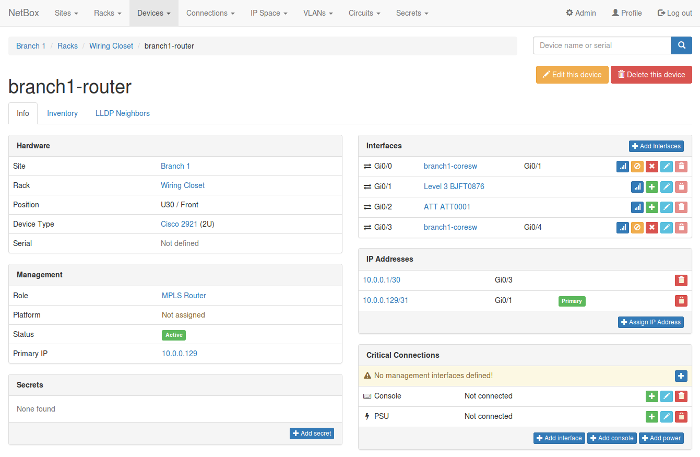 NetBox employs PostgreSQL's native network data types to construct a robust, efficient hierarchy of IP prefixes and addresses. For example, suppose you define a prefix 192.168.0.0/24, and then create 192.168.0.64/26 within it. NetBox will show the child prefix under its parent along with available allocations of 192.168.0.0/26 and 192.168.128.0/25. IP objects are arranged as a set of hierarchies defined at their root as arbitrary aggregate networks. And all IP objects can optionally be assigned to a VRF. 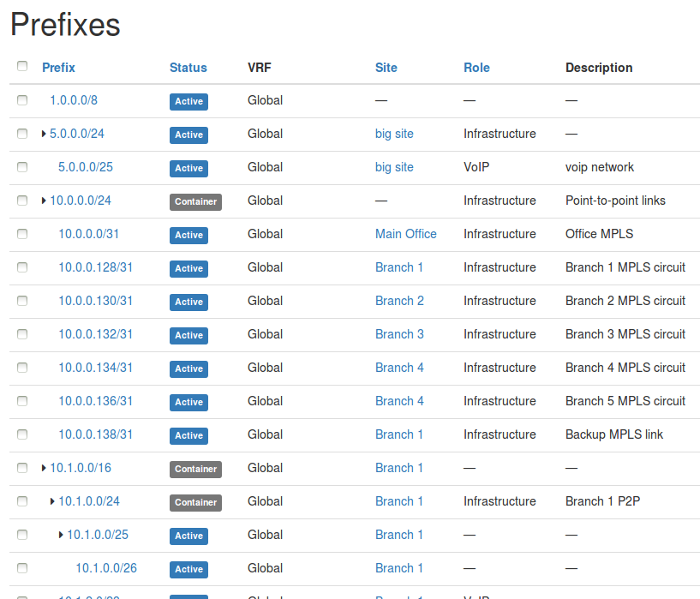 What NetBox is Not

While NetBox can fulfill a number of roles, I also want to point out what it does not do, in an attempt to mitigate any confusion. NetBox is not:

The one question flooding my inbox lately has been, "When will it be released?" While I can't yet provide an exact date, I'm shooting for late June/early July. My employer, DigitalOcean, is on board and we have made a lot of progress toward a public release. Now it's mostly a matter of finishing a few features that require modifying the database schema to avoid implementing potentially disruptive modifications soon after release.

Sounds really cool and exactly what I need.

Awesome! Will you release the source somewhere like Github so us fellow neteng/dev guys can contribute?

Does it do SWIPing?

Wow, super exciting! I can't wait until you release it! Thanks Stretch!

Does it have an API?

Any VXLAN support on the roadmap?

I remember seeing this on reddit last month. Good to see some progress towards release. Excited to use it.

@Cam: Not currently. Seems like it would be a reasonable feature to add (at some point).

@Drew: Interesting question. I'm not even sure what VXLAN tracking would look like. It's certainly a possibility.

This is brilliant! I'd be very on board with contributing if this was open sourced.

saw this when you put up the demo up on reddit. its really slick. biggest thing i would like to see is some manner of multi tenancy support. i see that with a bit of work it could probably be added with out too much trouble, but its not an area im super familiar with beyond building basic access databases. but with this being open source, i could see people developing it.

I'm pretty interested in this tool but I would really enjoy to have the "autodiscover host" feature. You're right with wanting to have a "photo of the network", with something that is always right. But having "autodiscover feature" would be really useful after the installation to have everything referenced in Netbox.

What do you guys think about this?

I have been testing this today, and must say that this is pretty much fitting all my needs. But I was wondering if it were possible to DNS Records as an object that can be associated with IP addresses as well.

I have a need to record all external DNS records, their associated External IPs and they entry point across the globe for the company I work for. Having a DNS record object in your software would be very handy for me.

Also, if possible being able to add images to objects would also be very handy too(rack photos, device photos, etc).

Seeing new IPAM ideas is so refreshing as their is a lot of cruddy options out there and no clear IPAM solution wins the prize. We are working on our own solution for top of rack provisioning (generating new running configs for switches) and we have to solve for this problem as well. Cannot wait to see the code:)

Good work !! with the included feature set looks like it beats commercial products...

By using the Rest API is it possible to export to csv, xls, etc?

Thanks for this great tool!

Looks great. Is there any RBAC planned?

Thanks for releasing! Great timing for us too; we were about to migrate all our data into phpIPAM but this looks to have most of the features we are after and could be used to replace our racktables install as well! Thanks again!

I've been tinkering with the demo and have been impressed with everything though was wondering what the topology maps look like. I couldn't seem to get them working on the demo (and haven't yet had the time to spin up a box for it).

Hi ..I am very new to this web site. I see lots of very useful stuff here. Amazing work guys..thanks a lot..

How can I download "Netbox" and use it to understand it's functionality.

This site is full of classy study material. Awesome and thanks once again.

1) why does it use ncclient? does it talk to the hardware somewhere?

2) can you allocate an IP address trough an API to integrate with existing provisioning tools?

Thank you for sharing, Jeremy!

We use handmade Django-based IPAM for several years - it's very useful but realy ugly compare to NetBox...

There are many other resources to manage - MPLS PW VC's, BGP communities, VRF RD's and so on. Will you add some 'TLV-approach' which allow a user to create additional tables for custom resources?

Just being curious, while deciding to build Netbox, did you look at "Ralph 3" ? It has a lot of similar functionality and build on the same technologies like Django. If yes, what was the reasoning to start from scratch and not build on already established project? Can you do a quick feature comparison if you are familiar with the project ?

Super cool. The main thing that keeps us falling back on spreadsheets shudder is tracking cable runs against machines or handling overlapping IP spaces. Most of the other asset/IP management tools either don't care about the power/network runs, or cant work with VRFs.

Any way I could sign up to get an announce when this is released?

Excellent job Jeremy! Thanks very much for sharing! I suppose we all got sick & tired of using Excel spreadsheets .. ;-)

Could you expand on the limited inventorying functionality? We have 5 DC's with over 3000 devices and having some form of discovery so we can have a base to start would be helpful when initializing netbox, we have a couple spreadsheets I wanted to compare the discovery with to validate and double check both sources. I'm debating between netbox, nipap and phpipam and netbox is what I personally am leaning towards but my teamlead wants some auto discovery feature. Also the demo server you had for netbox on reddit doesn't seem to be working anymore.

Just shout out to dev. Install it yesterday and already see how it will ease my network/dc management. Thanks a lot!

This is really good, been looking for the solution that really suit the real network life and this is the best closest one. Thanks a lot & keep up the good work man, hope to see more coming.