Taking the CCIE Lab in RTP

Cisco's campus in Research Triangle Park, North Carolina, is one of only two places in the United States where candidates can complete a CCIE lab exam (the other being in San Jose, California). People fly in from all over the eastern US and beyond to spend a day taking the exam. Lots of folks who've taken the exam have written up their experiences, but I haven't seen many talk at length about their time in RTP outside of Cisco's building 3.

I've lived just a few minutes away from the testing site for the past few years, and it occurred to me recently that visitors might benefit from some local knowledge.

Most people fly in via Raleigh-Durham International Airport (RDU). RDU is a medium-sized airport with two terminals. Most flights operate out of Terminal 2, except for Southwest Airlines, which is based in the newly-renovated Terminal 1. 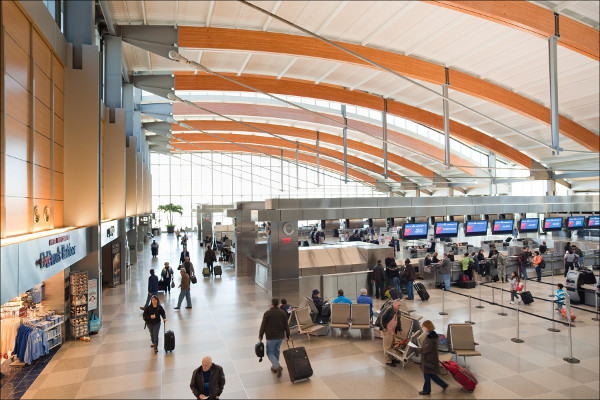 As airports go, I'm a big fan of RDU. It's a very modern, clean, and well-organized facility. The interior of Terminal 2 is beautifully designed to resemble an early airplane wing and is flooded with natural light during the day. (It's also one of very few places where you can find a Five Guys that serves breakfast.) The TSA folks here tend to be very professional and polite. Wait times in security are rarely long. And this isn't just the biased opinion of a local: in 2014, RDU was ranked among the top ten airports in the US.

I strongly recommend renting a car, as public transit is virtually non-existent around RTP. Most hotels in the area have airport shuttles, but you should confirm with the hotel personally if you'll be relying on it for transportation to Cisco's campus. Uber and Lyft do have a limited presence in the RTP area, but don't count on one to be immediately available should you need it.

Research Triangle Park comprises seven thousand acres nestled between the cities of Raleigh and Durham. Founded in 1959, its name derives from the geographic triangle formed by the three universities which surround it: North Carolina State University, Duke University, and University of North Carolina at Chapel Hill. 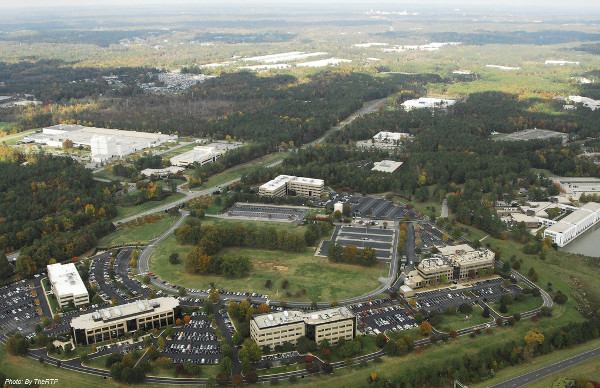 RTP is home to more than 200 companies employing roughly fifty thousand people. Among them are leading tech enterprises Avaya, EMC, IBM, NetApp, and of course Cisco. RTP buildings are scattered around a luch Carolina pine forest, providing a cozy, relaxed atmosphere. Cisco's campus is especially nice, situated along the edges of a small lake and laced with multi-use paths.

Given the proximity to RDU, there are plenty of hotels to choose from, most of which are clustered along Airport Blvd. I'm going to assume you're a normal person who knows how to use TripAdvisor to select a hotel, so I won't bother listing them all here. However, I will point out that two slightly off-the-path hotels are worth considering. (And no, you cannot stay at my house.)

This hotel tends to be a bit quieter than the rest as it's located outside the RDU flight path. Like all Garden Inns, it features a bar and quasi-restaurant within the lobby that serves real breakfast.

Not to be confused with Hyatt Place, which is closer to the airport. This hotel is the closest to Cisco's campus. There's a good breakfast place next door called The Brunch Box, but it doesn't open until 7am.

The Triangle is well known for its terrible rush-hour traffic. Fortunately, with the lab's early start time you shouldn't have much trouble making your way from the hotel. Just be sure to check the traffic conditions before you leave. If it happens to be raining, add ten minutes to your ETA. (If it happens to be snowing, cancel your lab and try again in the spring.)

Whether you're counting the minutes until your exam tomorrow, or waiting anxiously to receive your score, you'll probably be yearning for something to take your mind off of it. Here are some activities close by to keep you occupied.

Just down the road from Cisco's campus (take Kit Creek Rd west and turn left on NC-55) is a large new shopping center called Parkside Town Commons which features a combination movie theater/bowling alley/bar & grille called Frank Theatres. The same complex also houses a Field & Stream and a Golf Galaxy. There's a Target and a few more places to eat across the street as well.

Need to burn off some excess adrenaline? At DefyGravity you can spend an hour bouncing around a giant indoor trampoline park for $12. There's also a giant foam pit and an obstacle course.

This state-of-the-art indoor shooting range is just 15 minutes from Cisco's campus. Shooters of all experience levels are welcome, even if you've never held a gun before. The staff is very friendly and professional. All shooters are required to electronically sign a waiver and view a short safety video before being permitted on the range. At least one range safety officer (RSO) is present at all times to provide assistance.

The range will provide everything you need to shoot: eye and ear protection and firearms can be rented for a very reasonable cost (shooters must be 21 or older). One nice feature of TSA's rental program is that they rent by the caliber, so for one flat fee you can try out every 9mm handgun, for example. You're also free to use your lab score report as a target should you feel the urge.

Frankie's features an arcade, laser tag, mini-golf, batting cages, go-karts, and other outdoor activities depending on the season. There is also a café and bar on-site.

Does exam anxiety have you climbing the walls? At TRC you can, literally. $19 will get you an all-day pass with access to the entire rock-climbing facility, and gear is available for rent.

This county park, situated on a 500-acre lake, provides both open space and wooded walking trails. Consider the Old Beech Nature Trail if you want a quick (half-mile) walk to clear your head. Or climb the observation tower and enjoy a beautiful view of the lake.

There's a tiny, little-known park within the RDU airport grounds that's a great place to kill time before your flight if the weather is nice. It's mostly geared toward children, but the observation platform provides a decent view of runway 5L/23R with an audio feed of tower communications. The general aviation terminal is also open to the public. Limited free parking is available at both sites.

Thanks, Jeremy. This is kind of off-topic, but I'll be moving to Raleigh soon for a job (with Cisco) and since I'm not familiar with this city I was wondering if you can recommend certain parts in/around Raleigh to live.

see this is why I love your website!! Great write up

Are you still "Cert free"? Given this post, I'd be curious to also hear your thoughts on the actual CCIE test and cert.

@Andrew: I haven't held any sort of certification since 2012. They no longer hold any value for me at this stage of my career. I can't comment on the lab itself as I've never bothered with it.

Stretch, At this point in my Career, almost 20 years now, and many Data Center Builds and Migrations later I to feel that a Cisco Certification has no real value for me Personally. However, I did promise myself back in 1999 I would get it done. So I'm off on my CCIE Journey. So far I found your site to be very informative. I've spent so much time in the Data Center, when the CCIE Data Center tracked came out it really did perk my interest. So I figured R&S then DC. That should be good.

Thanks, it is very useful information.