Remember Maslow's hierarchy of needs from school? The theory asserts that every human shares the same set of basic physical and psychological needs in order to be happy, with more primal needs like food and shelter taking precedence over emotional needs like love and companionship. 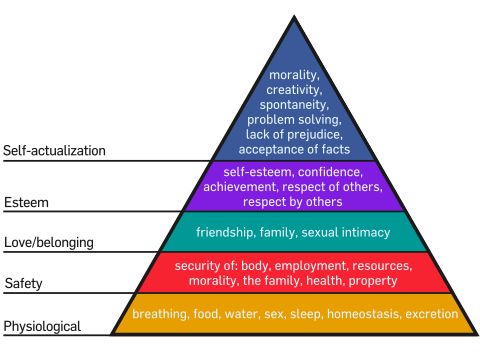 A while back, I was pondering what would be necessary to fully automate a network, and it occurred to me that a very similar hierarchy of needs can be laid out for a computer network to achieve its optimal state.

At the very bottom of the hierarchy is everything a network requires to function: Routers, switches, cabling, power, and so on, just as tier one of Maslow's hierarchy encompasses everything a human needs to stay alive. At this stage, a network can function, and can even function well, but it cannot adapt or grow.

Many small businesses operate their networks at this stage for years with no major problems. After all, when left alone, computers and networks tend to just keep chugging along. And if your entire network comprises a cable modem, a switch, and a few access points, it's entirely possible that it will run for years without needing any tweaking.

2. Someone to Operate the Network

Of course, more advanced networks need a human operator to make changes and address faults. At this stage, a network is associated with some human operator capable of inspecting and manipulating network components to modify the network's overall behavior. This could be a full-time network staff or just a systems administrator who pokes at a router every now and then.

At this stage, a network can grow and adapt. However, every change imposes a substantial overhead, as the human operator must first research the network's state (ascertaining the network topology, routing table, etc.) and apply all configuration changes by hand. I think it's fair to say that most networks today exist at this stage.

This is where things start to get interesting. This stage entails defining all of the network's components and how they should interoperate, in some entity separate from the network itself. As an illustration, consider running show lldp neighbors on a switch. The output will tell you what's currently connected to that switch and via which interfaces. However, it doesn't tell you what should be connected. Similarly, just reviewing the running configuration on a router doesn't tell you whether that configuration is correct, only that it exists.

But, if we employ IP address and infrastructure management systems and configuration templating, we can form some assertions indicating how the network should function. This model becomes the "source of truth" for the network: If some attribute doesn't exist in the model, it shouldn't exist in the real world. We can compare the real-word state of the network to the source of truth to identify and resolve any discrepancies.

At this stage, we abandon manual configuration changes in favor of deployments driven through automation. For example, instead of loading a configuration into a new switch by hand, we simply hook the switch up to the network and it downloads the appropriate configuration — generated according to our source of truth established in stage three — through an automated provisioning service. Humans no longer need to be involved in the process.

Extending this idea further, we can develop systems to automatically apply configuration changes to keep the network synchronized with its abstracted state. If we want to add a link between two nodes, we simply update the model through some human-friendly UI, and the system automatically configures the relevant interface on either node in anticipation of the new link.

This is really the holy grail of our field: networks that fix themselves. And I don't mean routing traffic via an alternate path when a link goes down. I mean things like:

Networks that reach this stage are truly awesome. And here's the best part: All of these things are easily in reach with modern technology. We just need to build it.

Was this article written to get us in management all excited? :) I totally agree, with you and very much desire this land of joy! Do you think we should start some follow on discussions about possible solutions to your wonderful visionary Utopian world?

The a parallel drawn between Maslow's hierarchy and evolutionary Network hierarchy is quite amazing!

Having implemented only up to Level 2, I will put down Level 3 for a new year's resolution!

The challenge I see with this, is retrofit. This is probably the reason most are stuck at Level 2. Designing and building a network like that is pretty easy from a blank canvas, but...

On a large complex network, making the move from level 2 to level 3 is a mammoth task, as it involves going through all the config on all the devices and ascertaining the state of the network. Half of that job is easy, obtaining a snapshot of the running config to tell you what the network IS doing. However the not-so-easy second half of that task is figuring out WHY each part of the config exists. This route is in the routing table with a particular next hop, great. But why is it there? why is that the next hop? What is the end goal of that and the related config?

Answering those questions is no small task in configs that have existed through several hardware life cycles and staff life cycles.

Then once you get the network blueprint down it must be maintained accurately. It's your one truth by which all else is measured, the truth cannot turn out to be a lie!

This is a problem as the end goal for a lot of network config is application related. Making things link up between teams is tough. App teams stop a listener on a server, this changes the needs of the network. This needs to be updated on the blueprint as the correct state of the network no longer needs that port reachable across it. This then gets implemented at the next true up and ACLs are modified to no longer include it. - How likely is that process to actually be followed? Since when do app teams care about the network team's documentation?

However once those rather large hurdles are overcome... Levels 4 and 5 are somewhat trivial to achieve if your state blueprint is good.

I am definitely working towards this, but it's likely going to be years yet before I get there.

Wonder if there is a software for step 3 and 4. Is SDN going to the ultimate solution?

Nice work. I had seen similar from jim French (believe its frenchjim.com, but yours is good (there is little similarity except in expansion),

I had planned on expanding upon this concept (maslow : network), will build on your insights and reference, will bounce off of you. but the content you have made is good work and important to consider when layering in automation framworks and SDN/SDWan, (twill be on williamnellis.com)

Hello Sir I have come to networking late in life. I just got my A+ and am now doing network+. I have seen some sites that are completely discouraging to people like me. Like you are wasting your time and you will never get anywhere. Maybe I am but never the less I find networking really interesting if a bit daunting at first. However on reading your page here it would seem that by the time I get efficient the whole system will be automated meaning I will know how it all works but there will be no human input. I wonder if we keep pursuing this automation of everything will the world really need mankind in the future. That to me is the scary thought. Thanks for your wonderful web site and sorry that people plagiarize your work.

Very nice article and I loved how you related it to Maslow's hierarchy of needs. Great analogy! I'm slowly working up to levels 3-5. Each layer incurs more cost outlay, but the money saved in the long run is worth it.

This was a great read. I recently inherited a network operating around the early part of stage 3, she doesn't quite yet speak the true true.

The network is too small to require (or justify the investment of) automated remediation. Getting us to stage 4 before I move on would be pretty boss though.

SDN technology is on the way. Cisco, Vmware optimize their product in this way, but today, it s not yet full operational. More company invest in this way, but it s costly, because doesn't work at first shot, or not stable. Cisco says use update, or use new product APIC-EM, Prime is old now, etc.. When you run a network, and one day, nothing works, because waas bug. That give you bad feeling about SDN technologie. I am sure it s good today for carrier, service provider, or very big company, when they have thousand routers with remotes sites, MPLS+internet. From my opinion, network is just a baby in this world for now. Not talking about programming network. Coming in the future.