One of my recent projects has been deploying an MPLS/VPN architecture across a pair of smallish datacenters comprised entirely of Juniper gear. While I'm no stranger to MPLS/VPN, I am still a bit green to Junos, so it was a good learning exercise. My previous articles covering MPLS/VPN on Cisco IOS have been fairly popular, so I figured it would be worthwhile to cover a similar implementation in the Juniper world.

For our datacenters, we decided to implement a simple spine and leaf topology with a pair of core routers functioning as IBGP route reflectors and a pair of layer three ToR switches in each server rack. The spine is comprised of four layer three switches which run only MPLS and OSPF; they do not participate in BGP. 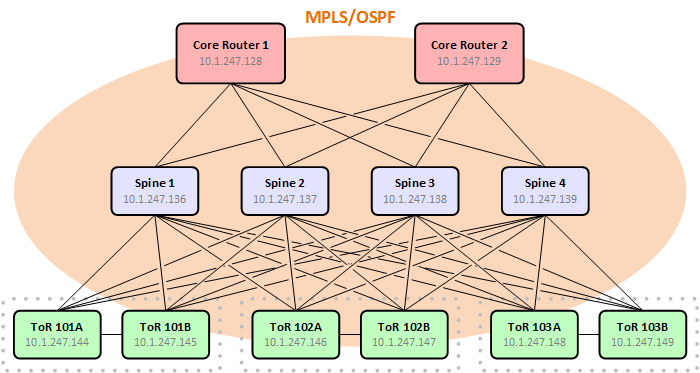 This article assume some basic familiarity with MPLS/VPN, so if you're new to the game, consider reading through these previous articles for some background before continuing:

Implementing vanilla MPLS with LDP is pretty straightforward: Enable MPLS and LDP on all your P interfaces, turn up OSPF, and do some quick sanity-checking. (Of course, merely deploying frame-mode MPLS doesn't buy us anything: This is just our first step.)

Begin by adding the MPLS address family to all interfaces which will carry MPLS-encapsulated traffic. You might opt to define an interface-range for all P interfaces depending upon the density of your network.

We also need to add these same interfaces under the MPLS protocol configuration:

This might seem redundant, but you can think of it this way: The first command enables the forwarding plane to accept MPLS-encapsulated packets, whereas the second command enabled MPLS processing and table generation within the control plane.

While we're add it, we need to enable LDP as well. LDP handles the mapping of labels to forwarding equivalence classes and the exchange of labels with neighboring routers. (LDP is not to be confused with the unrelated layer two signaling protocol LLDP.)

LDP relies on an IGP routing table to generate and map labels, so let's add OSPF next. The following example shows a minimal configuration on a ToR switch:

Believe it or not, that should be enough to get a bare-bones MPLS network up and running. A few simple commands will verify our configurations:

Great! We've got MPLS adjacencies established from this ToR switch to each of the four spine switches. Notice that although the TCP-based LDP adjacencies are formed between the physical interface addresses, the label space identifiers are taken from each switch's loopback address.

This completes the configuration on the spine switches. The remainder of work to be done applies to the core routers and ToR switches only.

Multi-protocol BGP is the heart of an MPLS/VPN network. PE routers use it to exchange routes and VPN information with one another. MP-BGP configuration can be a bit intimidating to those not familiar with it, but configuring basic adjacencies takes little effort.

Next, we enable MP-BGP on each ToR switch and configure the loopback IP addresses of the two core routers as peers.

The command type internal sets the adjacency type to IBGP. family inet-vpn unicast enables the transport of IPv4 routes. (I've intentionally neglected IPv6 here in the interest of brevity, but its configuration is similar.)

Once BGP has been configured on both core routers and all ToR switches, use show bgp summary to verify that the adjacencies have come up. If all neighbors seem to be stuck in active, check that their loopback addresses are being advertised via OSPF and that they can reach one another.

On Junos, a VRF is configured as a distinct type of routing-instance (literally, instance-type vrf). VRF configuration is where we assign logical interfaces, the VRF route distinguisher, and the route target import and export policies (which we'll add in the next step).

The line vrf-table-label at the end instructs the router to create an MPLS label for the VPN itself. This ensures that routes with a next-hop pointing to a directly attached multiaccess networks (for which the next-hop adjacency information isn't readily available) also receive routes.

If you're accustomed to building VRFs on Cisco IOS, the Juniper approach will seem a bit verbose. While it is possible to assign a single import RT and a single export RT without defining policies, they are mandatory when dealing with multiple RTs per VRF. First, we need to define and name each route target that we want to use:

Defining a pair of sequential route targets for each VRF allows for very scalable import and export control among many VRFs. For the purposes of this example though, we'll just focus on two.

First we'll define our import policy for the Development VRF. This policy matches all routes learned via BGP with at least one of the listed route targets (which you'll recall are simply BGP communities). All other routes are rejected.

Our export policy is configured similarly. In this example, we're exporting only directly connected routes. Two route targets are applied to each route being exported: RT-Development-Export (for import by other instances of the Development VRF) and RT-Internet-Import (for import into the Internet VRF).

Don't forget to apply the policies to the VRF:

Once all VRFs have been configured at the appropriate points throughout the network, MP-BGP will facilitate the exchange of routes among them. You can verify the routes within a certain VRF with the command show route table <VRF>.

One last tip: It's likely that you'll want to run BGP or an IGP within a VRF at the edge of your MPLS network. To do so, simply configure the protocol as you normally would under the routing-instance hierarchy, like so:

It seems that Juniper allows to use a structure like { and } for your configuration. I very much like the idea. Once I'm done with Cisco I will have a look on Juniper's solutions.

Can you tell which gear you're using for spine / ToR switches? Also, are you using L2VPN/VPLS instances?

All of the spine and ToR switches are currently QFX3500s, although we're considering moving to QFX5100 once the bugs have been ironed out. We've had no need for L2VPN.

I love Juniper! It's really nice if you have any programming background.

I'm glad you are taking the deep dive plunge into Juniper. Once I started using Junos, I found it hard to go back to Cisco without feeling like I was taking a step back. I love the flexibility of their routing policy language. The QFX5100's are great switches you will like them, especially once they start running kvm this June. Then you can virtualize Junos and upgrade between versions without any downtime.

We are also using a similar MPLS setup, as well as VPLS for certain things like extending Internet pops. I was wondering; this looks pretty much green field, is this a new data center or were you retrofitting an existing one?

I needed to add:

Great article.. can you add other details to the design how this datacenter is connected to edge of the network ?

So when a server on a ToR needs to talk to other ToR does data plane traffic goes all the way to one of the core router?

@chandu: Edge connectivity is unrelated to the MPLS/VPN design; that's all external routing.

@krishna: No. Inter-rack traffic is carried by MPLS via the spine switches.

Hi Jeremy! Why you did not use any of SDN solutions, like VMWare NSX or Alcatel-Lucent Nuage? They provide similar functionality and you can give customers to create their own networks?

How this is related to Data center, as reading the article , i see this is common MPLS or l3vpn deployment. I am not getting the data center concept here as i find this is same as normal mpls l3vpn deployment using Route Reflector.

It's useful in multi-tenant Datacenter where you use the ToR switches as 1st hop gateway for VMs while retaining the logical isolation.

Jeremy, I really didn't understand the purpose of running MPLS in Leaf & Spine architect, and what would the latency look like for all east and west traffic?

Jeremy, Can you please explain why you running MPLS in Leaf & Spine architect? and what does the Letancy look like? The reason I am asking is that, we do leaf and spine due to low latency and more east west traffic Like Hadoop.