A Slight Problem with Distributing EIGRP into MP-BGP

I ran into a problem recently when rolling out EIGRP on top of an Internet VPN for backup connectivity to customer sites, and the problem isn't even with the more complex bits of such an implementation. Cisco, it seems, has taken an unfortunately forward approach in attempting to design my network for me, stemming from a relatively obscure MP-BGP "feature." 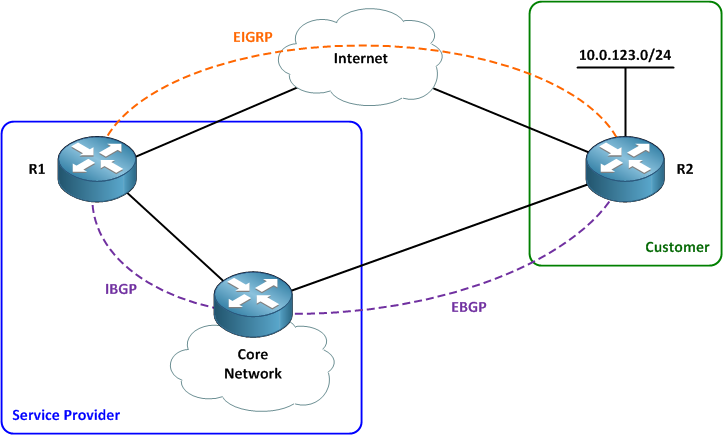 The customer network exists as a VRF named ABC within the service provider network. The customer router advertises a single network (10.0.123.0/24) to the provider.

The basic configuration to bring up the router adjacencies might seem a bit tedious for those not accustomed to such a setup, but it's really pretty simple. First, we'll configure MP-BGP for the ABC VRF on R1 so that it can learn the 10.0.123.0/24 network advertised via the dedicated link toward the service provider network core.

We can see that BGP is up and the customer route has been learned via the core:

So far, so good. Next we'll bring up EIGRP. (We can disregard the VPN configuration since we're focused on routing for the purposes of this discussion.) Note that EIGRP is VRF-aware on R1.

Finally, we'll redistribute EIGRP into MP-BGP on R1. We'll use a simple route-map to set the route's local preference to 90 (which is less than the default of 100) so that the BGP-learned route is preferred over the EIGRP-learned route.

With our configuration work completed everything should function as desired. Unfortunately, this is where we run into a rather sticky problem. When we go to verify that the correct route is being taken, we see that it has actually disappeared: Only the EIGRP-learned route is present in the BGP table for VRF ABC.

What gives? Let's look on one of the core routers.

The answer lies in this innocent-looking little extended BGP community:

Since the contending BGP route doesn't have a cost community assigned, it is considered to have a pre-bestpath metric of 2,147,483,647. This is the midpoint between 0 and 2^32, and obviously much, much higher than any sane EIGRP metric. So, the VPN route is declared the winner before BGP even gets a chance to weigh in (no pun intended).

But where did this cost community even come from? As it turns out, this behavior is actually baked into IOS to support a specific design scenario which Cisco calls EIGRP MPLS VPN PE-CE with Backdoor Links:

The "pre-bestpath" point of insertion (POI) was introduced in the BGP Cost Community feature to support mixed EIGRP VPN network topologies that contain VPN and back door links. This POI is applied automatically to EIGRP routes that are redistributed into BGP. The "pre-best path" POI carries the EIGRP route type and metric. This POI influences the best path calculation process by influencing BGP to consider this POI before any other comparison step. No configuration is required. This feature is enabled automatically for EIGRP VPN sites when Cisco IOS Release 12.0(27)S is installed to a PE, CE, or back door router.

"No configuration is required." Well thanks, Cisco. That sure is a nifty trick you've got there, but how about you let me design my network? I'll tell the router if I want it to do stuff like that.

At this point you might naively hope, as I did, for a simple off switch for this "feature" given that this hot-wiring destroys the BGP path selection process we all know and love (or at least know). But there isn't one. I played around with route-maps and community strings for a few hours before I opened a case with Cisco TAC, who confirmed that, no, there isn't a way to disable this behavior.

Defeated, I had a few options to resolve the issue:

I opted for interim solution number two as it was admittedly dirty but by far the least disruptive, all things considered. Eventually, I'll implement bgp bestpath cost-community ignore across the core routers, or possibly even switch everything to OSPF just to avoid this mess altogether, but why should I have to? Am I unreasonable in expecting this to not be a default or behavior, or even if it is, that the IOS developers would include a mechanism to disable it?

I've submitted a feature request via TAC to implement some control over this behavior in the future, but I'm not holding my breath.

I'm surprised you have an MPLS carrier who supports EIGRP as PE-CE protocol. I haven't seen support for that in the last 2-3 years. The PE seems to have mostly become juniper.

So it could be a lab-only issue?

I remember reading a document on this a while ago though it was for a different reason. We were trying to figure out how to get around BGP's path selection process and ended up using cost community. Handy to have in your pocket if needed but something like this will make you wonder if you really know what you're doing. We were using OSPF so we didn't encounter the same problem. That's a good thing too because the rest of it was hard enough. Good job in spreading awareness, not just of the problem, but of the topic in general.

We're running BGP with our carriers. EIGRP is run across the Internet DMVPN tunnels directly to the spoke customer routers we manage.

I am curious as to if your implementation of solution 2 works? I'm curious because your output on R1 is indicating that weight is actually trumping local preference (Origin incomplete, metric 409600, localpref 90, weight 32768, valid, sourced, best). Even though that is being redistributed from EIGRP into BGP, it's still technically considered "locally originated" and will have the default weight that all locally originated routes into BGP would have.

To further clarify, I think even if you get the Core router to prefer it's own eBGP route to R2, when it was advertised to R1, R1 would still prefer it's own locally originated route.

I don't know if you knew this or not, but Ivan actually just posted about this "feature" on his blog about three weeks ago:

Your scenario does a better job of putting context around the problem though, as Ivan's post seemed to be more of a warning that this feature exists rather than a full blown explanation of how it can affect the network.

I can't believe (or maybe I can) that Cisco would implement an obvious kludge like this and make it a permanent "feature" with no way to turn it off. Especially if they want customers to continue to use EIGRP as their IGP-of-choice. Let's hope your bug report feature request gets accepted, because this is just lame!

thanks for the heads up, this is really stupid from Cisco. Just want to ask why you did not consider other workarounds (please tell me if they are wrong): 1/ manually set the cost community to something lower than sane EIGRP metric (zero?) 2/ strip the comunity before advertising the prefix via MP-BGP

I notice that you define the ASN as 100 for EIGRP under R1, but set it as 65000 for R2. Do these not need to be the same for EIGRP to exchange routes, or am I being naive?

Ivan had blogged about this just last month. Check out his post at http://blog.ioshints.info/2012/10/beware-of-pre-bestpath-cost-extended.html

It looks like you can alter this via the extended cost community. Check out the Cisco doc.

Stuart: On R2, EIGRP is run in the global routing/forwarding plane. On R1, EIGRP is to be run in a specific routing/forwarding instance. ASN 100 is used for the global EIGRP process (router eigrp 100) and under that, it is started specifically for the ABC VRF (address-family ipv4 vrf ABC) and the AS for that is specified (autonomous-system 65000).

Another solution would be to block the EIGRP community that are added to BGP from being transported. Blocking the 0x8800 woudl prevent EIGRP from reconstituting the route, leaving it as a normal redistributed BGP route.

As for a knob to control this, I will talk to the PM and DE team and see what we can do

What application did you use for the router diagram at the top? That does not look like a visio diagram icon? It looks almost cartoonish. Btw, great post!

even i didn't see the same issue in SP.

I think, you could use the EIGRP SoO (site of Origin) attribute to prevent the EIGRP link being preferred, if you want the BGP path to be preferred. Both CE and PE will require the SoO attribute configured.

Stretch, forgive my ignorance, but are you saying that this 'feature' is enabled despite you not enabling a set community cost command in your BGP route maps?

Very nice and easy understand. Thanks so much!

Hmm I wanted to use this feature - as I'm using eigrp to CE over static vti(backup) and a 100 Meg primary link into another pe router, (primary) also eigrp. I wanted end to end preservation of the eigrp metrics, but ran into an issue when advertising the central services networks...this feature ignores the extended communities from foreign eigrp processes , even after they transit vpnv4...these networks went eigrp1-vpnv4a-vpnv4b-eigrp2... Any ideas around this one?

I know this post is from 4 years ago, but I thought I'd leave my 2cents anyway. I actually got around this by using a route-map. You can either tinker with using an import map within the vrf or just apply ingress on the peer. However, in either case the string "set extcommunity cost pre-bestpath" is where it's at.