The other day I was taking inventory of servers in a data center, and the idea popped into my head for a measuring tape denoted in rack units. This would save a good deal of time when determining the position of a device in an equipment rack, or the amount of free space available. Of course, like nearly every idea I've had, I was not the first. I found a product called Rack Ruler on Amazon for $23.97: 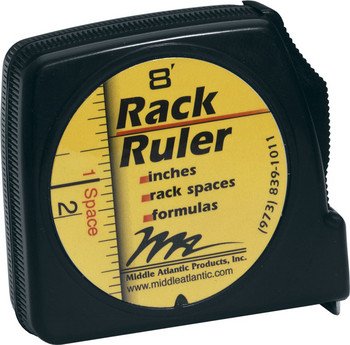 Neat, but $24 is a tad expensive for an obscure tool of undetermined quality. Knowing that a rack unit is exactly 1.75", one could easily repurpose a regular SAE measuring tape by marking it at the appropriate intervals.

I got one of these as a promotional item years ago, but someone borrowed it. :-(

I'd love to see someone sell rolls of masking tape with marks at 1.75" intervals.

At my old job all the headends had several rack high peaces of wood which were marked out with the RU messurments. these came in very handy as I was docuemting equipment additions. they just would not be easy to transport from location to location like the tape.

I had one of these, got for a bit cheaper than the amazon price from an outfit which specializes in A/V equipment. I carried this around in my bag for years and on the occasion or three that I needed it, it more than paid for itself.

I feel like some platform chassis used to come with a cardboard RU planning template that was a bit to bulky to carry around but tempting to keep stashed in the DC somewhere for future use.

I like how the Dell racks have the numbers in the front and back. Is this not a standard now?

They sell a magnetic tape that you stick next to the holes and has the measurements.

How about the cheaper two post racks where the holes are all spaced differently? I would soon get me something to measure with if I had to deal with them things again on a regular basis...

Once you learn the hole spacing (at least on our Chatsworth racks), you can eyeball it easily enough. A single U is 3 holes spread apart, adjacent units are identified by the pairs of holes close to each other. I don't have to think too hard about it.

I also use multi-colored electrical tape to mark a specific range of space on the cable management side (aligned to the rack units), then throw a label in the middle.

I'm pretty sure brick masons rulers/tape measures have markings at 1.75", in addition to their other markings. They're mass produced, and you can probably get them for much cheaper than this tape.

Late reply but I have taken to using a Sharpie marker to number any cabinets that don't come pre-numbered (Dell and APC are in my experience). If the rails are black powder coated, I would try out one of the silver Sharpies.

We found the standard tape measure with rack units very awkward...so we have come up with a magnetic tape, that looks much like a tailors tape measure,but it can be placed on a rack or cabinet, while one racks equipment according to a drawing or it can be used to audit existing facilities...