The command line configuration of Cisco Aironet access points can be confusing to someone who doesn't understand what's going on behind the scenes. "What's a bridge group? How is it different from a VLAN? Why do I have subinterfaces and a BVI?" In this article, we'll walk through a basic multiple SSID configuration on an Aironet one section at a time and shed some light on how bridge groups are used to tie everything together.

Our example will make use of two SSIDs:

Two relevant functions are performed in the snippet above. First, our two SSIDs (Corporate and Guest) are defined and associated with VLANs. Second, integrated routing and bridging (IRB) is enabled with the command bridge irb. This allows to define bridge groups and a BVI.

Our access point has two physical radio (wireless) interfaces: Dot11Radio0 (2.4 GHz) and Dot11Radio1 (5 GHz). Since we want to enable both SSIDs on both radios, the interfaces are configured identically.

First, we assign both SSIDs to the physical radio interfaces. We also include the command mbssid to ensure that each SSID receives a unique BSSID (which is analogous to a MAC address).

The configuration of our FastEthernet interface should look similar to that of our radio interfaces. Two subinterfaces are attached to the physical interface, with each tied to its respective VLAN and bridge group.

BVI1 is the default BVI on Aironet access points and cannot be deleted:

While you can create BVIs for other bridge groups, only one of them can be assigned an IP address for management (similar to how a layer two-only Catalyst switch can only have one active VLAN interface). And since BVI1 is going to be there anyway, we might as well use it.

Note that the IP address assigned to BVI1 must be in the same subnet as any SSID assigned to the bridge group (in this case, the Corporate SSID).

Putting it all Together 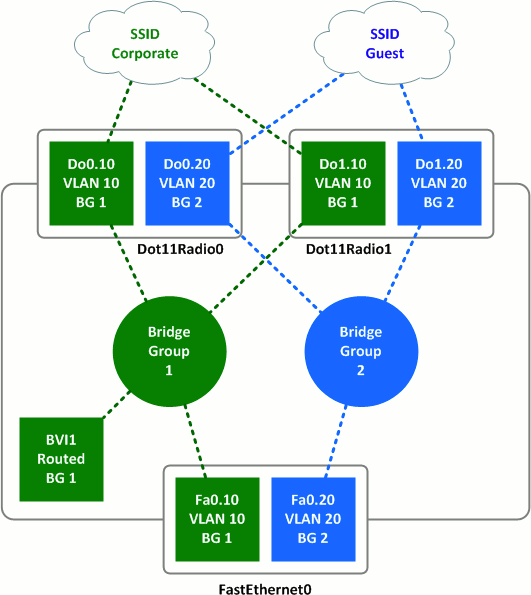 Working from top to bottom, we can see that:

What About Those Other Bridge Group Commands?

You may have noticed that, when assigning a radio interface to a bridge group with the bridge-group command, four or five additional commands also appear out of nowhere. For example, here's the full configuration of interface Dot11Radio0.10 from our lab as it appears in the running configuration:

These are default commands which tweak the behavior of bridge groups on the access point, primarily by disabling spanning tree and compensating for its absence. Unless you have a specific reason to modify them, just let these commands be.

So is there a difference between bridge group and vlan?

@Michael: Bridge groups are used internally to the device to bridge traffic from one routed interface to another. They can be used similar to VLANs internally, but don't provide any traffic isolation outside of the device as VLANs do with tagging.

Great article, Jeremy, many thanks! I'm not too familiar with the WAP products, but the C877 integrated service router seems to work in a pretty similar way, so my question is, why would you use bridge groups, why not just use those subinterfaces (both radio and LAN) as routed interfaces?

Incidentally, any suggestion for how to enable multicast across the readio interface (i.e. between two devices attached to the same SSID)? I've been scratching my head over this for weeks.

What if you want your management traffic to be in a separate vlan that is not broadcasted in a SSID.

Would you still need any Bvi?
Or could you just create a Vlan interface with an ip address?

On Aironet APs, you can't assign an IP to anything other than a bridged virtual interface. And the only BVI you can use for IP is 1. This is because you have to enable 'route IP' for the bridge, and on the Aironets I've configured, it only allows you to use bridge group 1...

I include my hardware & IOS version in case it's changed, but in the past I've tried to use a different bridge group number for management routing & I couldn't make it work.... :(

Ok. So then solution would be ( to separate management traffic to be in a vlan that is not broadcasted in a SSID) to use BVI 1 with IP address and map it with FastEthernet subinterface, and create two different bridge groups. For example:

Excellent post! Perfect timing since I was about to roll-out a second SSID on my Aironets next week, and this solidifies my understanding of the radio-vlan-bridgegroup-interface relationships.

Regarding bridge-group 1, I've ran into some issues with AP's telling me I cannot remove this group from the radio physical interfaces. For ease of use, management or using a basic configuration template type to configure many APs for different sites, I've configured a text file offline and uploaded which works perfect like in the example above. In some cases I've modified an existing AP running config and found the AP gives errors when you try to remove the bridge group 1 from the physical radio interfaces.

It is possible to configure a management IP on the fa0 interface and subinterface.

Great article. And very timely for me.

The problem I'm having is I can authenticate to my WAPs but not getting any IP address. I'm pretty sure this is related to the crappy Netgear switch that the WAP connects to.

Normally nn the switch the WAP connects to you would need to have that port set as a trunk port to allow traffic from both the guest and private VLANs correct?

You wouldn't use the radio interfaces and sub-interfaces as routed interfaces because an AP is a Layer 2 device and does not have any protocols or ability to route. The command 'bridge 1 route ip' is actually a bit of a mis-nomer. In order to accomplish this, it wraps packets leaving the AP in appropriate additional frames with the MAC address of bridge-group 1. It then trunks across to the switch, and the routing is performed down stream at the appropriate Layer 3 device.

Yes, in order to have traffic from the AP cross a switch when you have multiple SSIDs and VLANs configured you need a trunk. When you use the encapsulation command on your subinterfaces, you are tagging the traffic that traverses those ports. Without a trunk configured on the switch with the same VLAN setup, the traffic cannot flow. If you plug an AP with multiple SSIDs and VLANs configured and you place one of those SSIDs on the native VLAN, then your switch in access mode would permit that one SSID through (assuming the switch defaults its port to an untagged VLAN in access mode). If, however, you only want a single SSID but you wish to carry it over an access port that is a tagged interface, then you still need the subinterfaces and encapsulation statements to ensure your traffic on that SSID is able to go through the switch because the tags would match.

I'm curious as to what hardware this was configured on. I'm trying replicate these steps on my Aironet 1141n but cannot setup the bridge groups the same way. The Dot11Radio0 is in bridge-group 1 by default and cannot be removed. This means when I go to configure Dot11Radio0.10, I cannot add the bridge group 1 like you did in the example. Should I just move to the next bridge group?

I forgot to add that you could not delete bridge-group 2 without having first assigned bridge-group 1 to your sub interface otherwise the 1141N will automatically assign the parent physical interfaces (both Radio and Ethernet) back into bridge-group 1 - Annoying!

So the correct order of events is:

Remove bridge-group 2 (or whatever place holder number you have used) from both parent physical interfaces.

Do you know why I can't do, "no bridge group 1 block-unknown-source?

It says command not allowed on dot11 0 interface.... What gives?

I want the first subinterface for both radio and ethernet to be in bridge-group 1, and I don't want to set the native VLAN (as AFAIK, if I set a native it ignores tagged traffic), but the AP complains that bridge-group 1 cannot be removed, and if I try to change the bridge-group on the parent it says

You can make bridge-group 1 move my specifying a native vlan on a sub-interface, but when you remove the native, it promptly puts the bridge-group back where it was on the parent. Any ideas?

Answering my own post, I think it's just plain impossible. I think Cisco want to force manamgment on VLAN1, so I ended up assigning a managment address on VLAN1, and assigning bridge-group 1 to that.

In reply to "cjbartram," you can use a different management VLAN if you change the native VLAN on the switch port, e.g.

This means that untagged packets from the AP BVI1 will now be in VLAN 40 on your network.

I work with lightweight APs and controllers all the time but autonomous APs are rather mysterious. I've been struggling to setup autonomous APs with roaming, realizing that just having the same SSID does not mean you can "roam" from AP to AP. Do you have any hints for setting up a couple of Cisco 1231 APs (for example) so that ordinary wireless users - phones, tablets, etc. - can roam from AP to AP without having to turn wireless off/on to connect to the "other" AP?

Whenever I google something network related, I get pointed to packetlife.net.

I'm still not understanding.. So what would happen if there were no bridge groups? Or is it even possible to have this configuration without bridge groups? Thank you.

For those who are looking to solve the issue of managing the Cisco AP through a seperate management VLAN, I think I may have found a way.

It seems to work, however I don't know if there are or may be some security issues with this setup.

Looking forward to your comments.

What if you want to put the bvi on a different VLAN? I get a "bvi does not support bridging" if I try and use the bridge-group command.

I am planning to create a loopback interface on AP and will assign IP address of other subnet than BVI so that I can have managment IPs.