How Much is Your Old Copper Worth?

I spent the better part of my day helping clear out years-old permanent wiring from a datacenter cage out of which my company was moving. After reclaiming patch cables suitable for reuse, we wound up with a 380 pound (172 Kg) pile of cabling. (I'm sorry I neglected to take photos.) Wanting it not to go entirely to waste, we dumped it in the back of my Tacoma and drove to a metals recycling center in the area. We figured it was a convenient way to get rid of the mess, and maybe we'd make some lunch money.

Copper prices have been soaring in recent years due primarily to ever-increasing demand from electronics manufacturers. The raw material currently sells for around $3.40 per pound, more than three times its price just ten years ago. In fact, metal theft has become a growing problem affecting a number of industries including telecommunications. 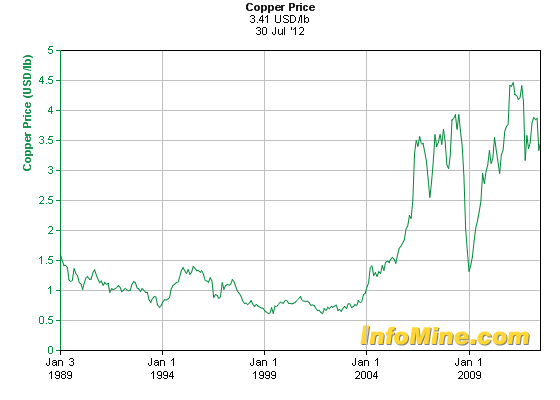 Encouraged, we loaded up a second haul, this time consisting entirely of excess power cables. Power cables have a tendency to accumulate over the years because even as obsolete equipment is liquidated, people will hang onto the associated power cables as they can typically be reused. Of course, nearly every new device ships with its own new power cable(s), so we end up swimming in the things. Here's what 431 pounds (195 Kg) of power cables looks like: 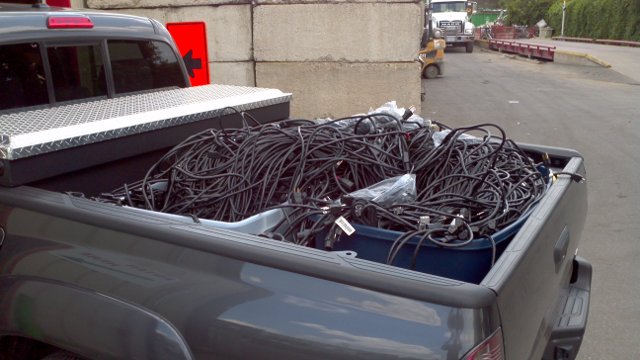 Profit: $235. The payout for power cables isn't as high as twisted-pair cabling since a greater portion of the gross weight belongs to the plastic insulation surrounding the valuable copper inside (and presumably because many power cables aren't pure copper), but that's still a good chunk of change.

The lesson here is to never throw out old cabling: Recycle it. Not only is it better for the environment and economy, you can make a few bucks for very little effort. We took our two loads to Potomac Metals in Sterling, Virginia. The facility is arranged so that you drive into their garage and offload whatever you're dropping off into a bin. They weigh the filled bin and print you a receipt, which you then scan at a machine resembling an ATM and collect your cash. Then you drive right on out. We spent fewer than five minutes of our time per load.

This particular recycling chain operates primarily in the Northern Virginia area, but you should be able to easily locate a similar company in your region. Many city and county governments also provide recycling services, though they are less likely to pay cash for materials.

This is my first comment on this site - been lurking for a few months and finally decided to register. I am a student worker at the university I attend, and work for the network admin office. We do this all the time, whenever we get a pickup-load of wire to take to the recycling place. In fact, we will also take the metal off of outdated equipment - old UPS', old chassis housings, etc (any non-circuit board metal basically) down to the same place to recycle. They also take burned up UPS batteries, transformers out of the UPS', etc.

Unfortunately, our copper price seems to fluctuate more based on who is behind the counter signing the checks than it does the market. Sometimes we get the "unclean copper" price, which makes for some large checks ($1.34/lb is the highest I have seen thus far). Other times, we get the "light copper" price of less than $0.50 per pound. Batteries bring a nice chunk of change, too. For us, the money goes back into the network "slush fund" for tools and other misc equipment.

To date, the largest check we received after stripping an entire seven-story building of all the Cat5e we could pull out (we cut it off at the conduits and the walls, as they were doing asbestos removal - didn't want the wire behind the walls for sure!) was over $750. Glad to see someone else doing something both good for the environment and their wallet!

Some other "Junk" I have found to have worth:

UPS (or any other lead acid batteries): $12 a piece for the car battery sized ones

CPUs: A premium for them that varies almost daily.

Full PC's: $3-4 a unit because of all the other goodies inside

Electronics contain a fairly high amount of gold. The older the stuff is the more gold it has in it. Gold is one of the best conductors so its no surprise really...

One of our subsidiary companies owns and operates a number of asphalt plants, and wire theft is a huge issue for them. Considering much of that cable carries 480v, it's safe to assume it's not being ripped off by amature thugs.

I would only caution that you take wiring to reputable recyclers, as the easy/cheap way to reclaim the copper within is to burn off the insulation, which produces quite a bit of toxic waste.

It is amazing how much we can recycle these days. Imagine the amount of wire that could be recovered from a commercial demolition. Pretty soon the demo companies will pay you to knock a building down!

I started out in Telecommunications working industrial and commercial inside plant cabling. In fact my first few jobs that I managed were the wreck-outs of Dell's offices in the Austin area. We were upgrading at that time from Cat-3 to Cat-5. Good lord there was a lot of cable. We used to turn it in for a weekly beer get together at the office on Fridays after work.

I did a phone frame at a local university, and the cabling coming in was, I think, 1800 pair, which was huge, and came off a Reel attached to a semi-Trailer, and was pulled through the conduit from the other side with (a lot of lube) a Tractor. The left over from that weighed like 5lbs per foot, and was sold for quite a bit of money, if I remember correctly.

Now, I work on the logical side of things in Cell Tower Backhaul. Probably 1 in 20 of our tower outages in Texas now are due to copper theft. Something to keep in mind if you have a call that doesn't complete, or your data speeds are slow on your mobile device.

Very nice article, we can get many idea through this article for using waist material in a mannered way. Its really amazing that we can recycle more & more in present days.

there is money in junks .In the Philippines old copper wire cost $2 per pound. think about that because of recycling this scraps a company that would replace or upgrade cables would earn money from it . that would be a great saving plus you can help minimize toxic waste because if these wires would not be properly disposed they would produce toxic wastes. we'll I should say that you have a nice blog here .

I am currently teaching a Cisco class and I just showed them the picture of your truck filled with power cables. What an awesome idea! Might give them more motivation to remove old cabling now that they know there is some money to be made from it. The class loved it, thanks!

We used a company(XS Recyclers) that advertised they would come out to the customers site and weigh & pay. We gave them a call and sure enough, they showed up with a truck and a portable scale.
We had circuit boards, computers, wire, copper pipe, THHN, Cat5, a few small appliances and just a bunch of stuff! When he finished weighing everything he went back to his truck, watched him enter our info in his laptop and then came back to us.
He handed us a receipt and $659 in CASH!!! That was truly the greatest recycling adventure ever, and the best part was I never left the house!!