Dynamic connectors in Microsoft Visio will typically have no more than one ninety-degree angle. This behavior keeps the line rendering as simple as possible. Of course, sometimes one need connectors to travel out of their way a bit across more complex drawings in order to keep things clear.

To create just two new right angles, you can create a breakout like the example above and then simply move one portion of the connector in line with the breakout; it should snap right in place. This will fuse the two sections of line back into one.

You can repeat this process at junctions where you want a connector to change direction to create very orderly (or in the case below, chaotic) connectors with a predictable path from end to end. 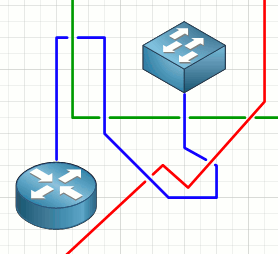 Is there a way to make the text in a curved line stay parallel with the line i.e. be curved also?

I remember getting this to work years ago but can't remember at all at all.

Super, I didnt know that. This is much better thant he squiggly line i've been using. Thanks a lot

If you get time maybe you could come up with a Visio Cheat Sheet, or for that matter any and all of the Office Applications cheat sheets.

Very neat. Thanks!
BTW, can you post link to your cisco's visio stensil ?

Well things should get interesting. I just saw the new hakin9 magazine and it seems they are going after cisco now. Malware, router spammers, rootkits and the like.

thanks a lot ,it's really useful .

Perfect - thanks exactly what I was after shift and ctrl!

I use creately to create network diagrams. before that I used packet tracer from Cisco. Is visio better than both?