Often it can be hard to cram all the details you want onto a topology drawing. We've discussed what details should be included on a topology drawing versus those which are better recorded on a spreadsheet in a previous post. Today we'll look at how we can use layers within Visio to illustrate separate layer two and layer three topologies using a single drawing.

Below is an example of a layer two drawing, with relevant labels (interface IDs and VLAN numbers). 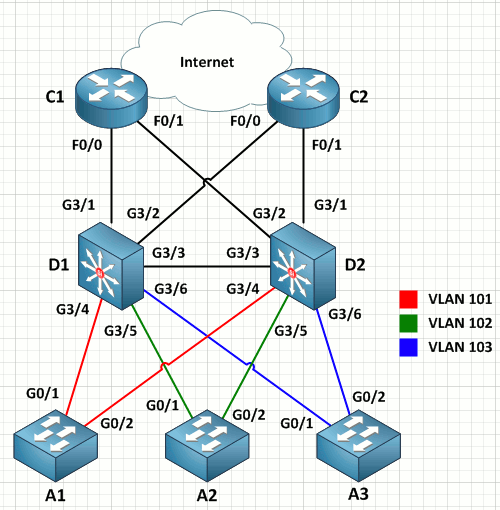 In order to illustrate the corresponding layer three topology, we should create a second drawing (rather than attempt to squeeze in a bunch of IP addresses). We could copy and paste the shapes and connectors into a new worksheet, but instead we'll employ Visio layers to reuse the existing drawing.

First we need to assign the existing labels to a layer. To do this, we open the Layer Properties dialog from the toolbar. We'll create a new layer named "Layer 2." 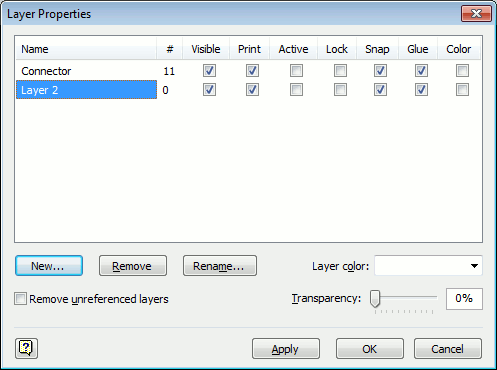 Next, select all of the existing interface and VLAN labels and assign them to Layer 2. (If the menu option is disabled, ensure that you have selected at least one text box or shape first.) 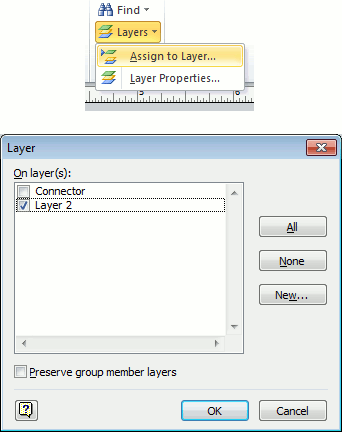 We can now hide all of these labels by unchecking the "visible" option in layer properties. This leaves us plenty of room to add layer three labels. 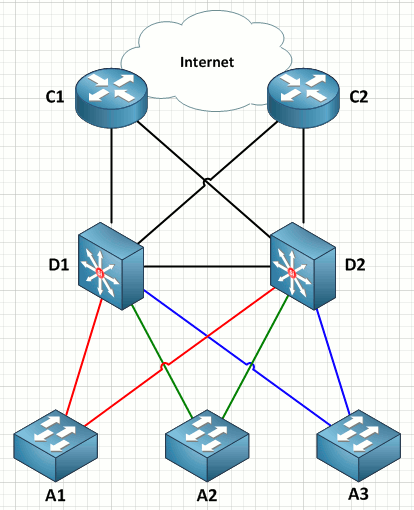 After adding our layer three labels, we can assign them to a new Visio layer (Layer 3) and toggle them on and off as well. This allows us to easily switch between layer two and three views of a common topology.

Granted, this approach won't always work for complex topologies, but keep in mind that this works for shapes as well. For example, perhaps you'd like to show each access segment as a single block shape at layer three, but want to show every individual switch at layer two. This can easily be done by assigning different shapes to the appropriate layers. Give it a shot and share your results in the comments!

Great post, so many people never use layers and give so much more flexibility. One example I use them for is semi-private data such as monthly link cost. Not every one needs to see that but some times you want a graph showing where the money is going. Many other examples but hope this gets people to start using them.

Dear Jeremy. Excelent article but I don´t have money to buy a Visio Licence. Do you have any suggestion?
Best regards.

I often find myself copy/pasting a topology into different visio pages, then labeling each with layer-specific addresses (Vlan & if# on one, IP/mask on another). This is a much more elegant solution but toggling the layers is not very intuitive/customer-friendly. Is there anyway to link a widget or button on the legend with layer visibility?

never heard of this feature,thanks!

i'm a newbie to visio

not able to use visio to draw network diag

@Free Software guest: You can try Dia or Inkscape. I find Dia to be similar to Visio. Inkscape is a general vector graphics program. I think the drawings that you're able to create in Inkscape look nicer, but they also take more work to produce.

@Free Software guest:
I've used Open Office (Libre office) Draw several times with similar results using layers, it's quite easy and free. Obviously it lack the advanced features of Visio but I don't think that everybody use them all.
Davide.

Is there a way to quickly toggle layers? I can't find a layer toolbar or anything of that nature.

Layers in Viso are a very useful tool. I've used them for ages on the very large topology diagram I maintain at the orifice.

If you want to toggle layers quicker then add the 'layers' menu item to the visible tool bar by using the 'custom' option and just dragging and dropping it where you can reach it very quickly with a mouse movement.

Record a macro when manually hiding/showing a layer and then add a button with the same code or just use a shortcut key.

Thanks again Jeremy, just tried this out with Visio 2007 - works a treat for Spanning tree info on diagrams.

where did you get those stencils? Cisco's stencils are pretty dull next to those.