The development release of Wireshark 1.5.0 was released last week, marking the latest milestone for the family of packet analysis applications. Since hesitantly crossing the 1.0 mark in 2008 (two years after being renamed from Ethereal), Wireshark has been growing at a fairly ambitious pace. I'm currently using Wireshark 1.2.7. Curious what features have been introduced recently, I grabbed the development source tarball and compiled it on my Ubuntu workstation. 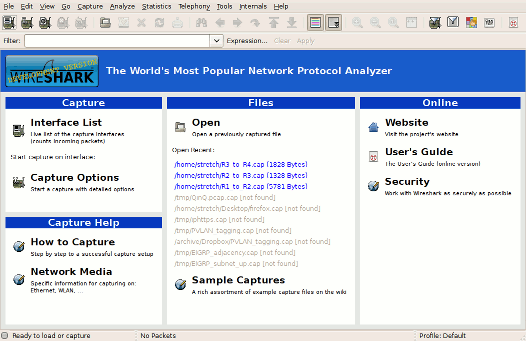 This article discusses some of the more useful improvements since 1.2.7, some of which are available in the current stable release 1.4.3. For a complete list of features, bug fixes, and new supported protocols see the Wireshark release notes.

Right-clicking on a display column in the packet list pane presents a context menu from which the user can easily sort or hide (v1.5.0) the column, horizontally align its fields, and modify the information it displays. Columns can also be rearranged by dragging them with the mouse. 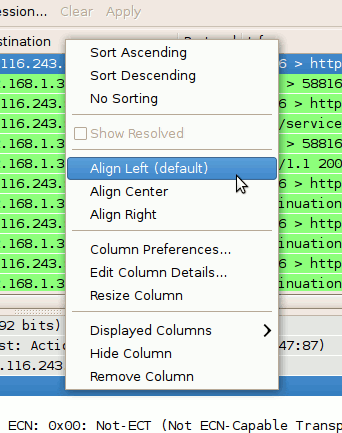 Packets can be ignored by right-clicking on the packet in the list and selecting "Ignore Packet". This is handy for temporarily removing specific packets without actually altering the capture data.

The functionality of the standalone utility text2pcap has been incorporated in the Wireshark GUI. Packet captures in text format (hex dumps) can be imported under File > Import.

Release 1.5.0 introduces syntax-checking support in the capture filter field. This allows a user to verify that the filter provided is correct before attempting to start a capture. (The display filter has supported syntax checking for some time.)

The TCP window graph for a TCP session can be opened under Statistics > TCP Stream Graphs > Window Scaling Graph after selecting a TCP packet in the capture. Note that TCP windows are unidirectional; be sure to select a packet from the desired direction of the TCP session.

I would definately like to learn more about Wireshark, maybe take the certification some day but need to take care of the CCIE first.

You definitely don't need pursue a certification to learn Wireshark. Just read the manual and start using it.

Yeah, I already use it and I know the basic functions but there's always more to learn. Not only the program but do some studying of protocols in depth.

Great,
I tested with my personal libcap but I do not have rising stages (FTP, netbios, SCP ...) Could you post a link to an pcap file to try this feature ?

@herve: Did you try the Packet Captures section of the website?

I bet there's something there you can use.

The Wireshark Network Analysis book by Laura Chappell is an excellent reference and way to learn to use Wireshark.

can you help me?
how to read a throughput graph??

I have been a longtime Wireshark users, and I will take your update anyday over their release note.

Thanks for the illumidate :-D