Private VLANs on Trunks and SVIs

This article examines the function of private VLANs across 802.1Q trunk links (not to be confused with configuring private VLAN trunk ports, which are supported only on the Catalyst 4500 and 6500 series) and how they can be mapped to SVIs for multilayer switching. For a review of private VLAN fundamentals, check out Basic Private VLAN Configuration. We'll be using the example topology below as a reference. 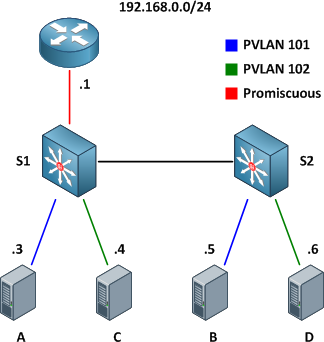 Our private VLAN configuration on S1 and S2 looks like this (if you're following along in a lab, note that the community VLANs 101 and 102 must be created before being associated with the primary VLAN 100):

Here are the physical interface configurations per switch for your reference:

Note that there is nothing special about the trunk configuration; both ends are configured as typical 802.1Q trunk interfaces. 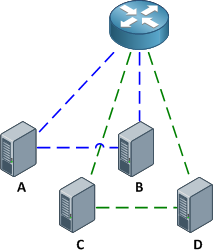 Of course, good network engineers aren't satisfied simply knowing that something works: we want to know how it works. This functionality is actually achieved by bending some rules about VLAN assignments. Traditionally, you expect return traffic originating within a VLAN to come back over the trunk tagged with that same VLAN ID. This is not always the case with private VLANs.

When the router sends a frame to one of the hosts on S2, the frame is tagged as belonging to the primary VLAN 100 when it traverses the trunk, because the router is attached to a promiscuous port. Frames originating from the hosts, however, are tagged with their appropriate secondary VLAN IDs. A frame from host B back to the router, for example, is tagged as VLAN 101 when traversing the trunk link.

And of course, here's a packet capture to help drive the idea home.

What if we wanted to remove the router from our topology and do all inter-VLAN routing locally on our multilayer switch S1? No problem, we just need to create the primary VLAN SVI (switched virtual interface, also commonly referred to as a VLAN interface) and apply to it a mapping for our secondary VLANs. First we'll shut down the interface connected to the router and enable multilayer switching.

Next, we'll create the SVI for VLAN 100, assign it the IP address which was previously assigned to the router, and map our secondary VLANs.

S1 now functions in place of the external router; all hosts can reach its routed Vlan100 interface but are still restricted to communicating with hosts in their secondary VLAN.

Excellent Article Stretch. Great job driving home the concept of SVIs and their role in PVLAN.

One discussion that i was having earlier with the good folks at OSL was "Intra and Inter PVLAN traffic filtering" . To do intra-PVLAN filtering , the methods that i can think of is to apply ACLs on the Promiscuous router / SVI.

For inter-PVLAN filtering ( i know this goes against the concept of PVLANs in the first place ) , i would think of the Promiscuous trunk port that you mentioned early in this blogpost.

Your thoughts on this?

good stuff, finally it hits home what that mapping and association of the vlans is all about, thanks...

Really good article, i was reading about pvlans just about yesterday. What about a private vlan trunk? I think that some theory on that would be really appreciated (at least, by me :D ). Is it possible to have some dumps of pvlan trunks too?

Private VLAN ports on some Catalyst 6000 blades have restrictions. In http://www.cisco.com/en/US/docs/switches/lan/catalyst6500/ios/12.2SXF/native/configuration/guide/pvlans.html#wp1143064:

"These restrictions apply when you configure groups of 24 ports as secondary ports:

"Within groups of 24 ports (1-24, 25-48), do not configure ports as isolated ports or community VLAN ports when one port within the group of 24 ports is any of these: -A trunk port -A SPAN destination port -A promiscuous private VLAN port -In releases where CSCsb44185 is resolved, a port that has been configured with the switchport mode dynamic auto or switchport mode dynamic desirable command.

I ran into this limit while upgrading a working Catalyst 6513 from 12.2(17)SX to 12.2(18)SX for a vulnerability. After the upgrade, many private VLAN ports showed no link. Backing out to the previous version restored service.

The dynamic mode means the port can also behave as a trunk, and the possible trunk mode is incompatible with other ports configured as private VLAN ports. This is a restriction in all releases of 12.2SX, but I never could find why this restriction wasn't enforced on my platform running 12.2(17)SX. The fix was explicitly defining a switchport mode on each port or disabling the port before attempting the upgrade again.

Awesome article! Before reading this article I understood how private vlans worked but wasn't quite sure how the frames were tagged when traversing a trunk, and now I know!

I scoured the internet and this was the only clear illustration I could find on how the tagging worked. The packet capture was a great bonus as well. I love to see the decodes in action. Thanks again!

Correct me if I'm wrong.

Thanks a lot, very nice explanation!

Thank you a lot, it's quite simple and perfect explanation. o/

Well done on demystifying the land of Mordor that was in the FLG and OCG books. I don't think I've ever seen it described so concisely and clearly. you should send this to them and get your name down for the next CBT Nuggets / Ciscopress book.
And I love the CAPTHCA question.

Cisco should pay you, big bucks.

I just read the Private Vlan Chapter from the CCNP oficial book, and it wasn't very clear. Read you posts:

and it was like someone turned on a light.

And also they didn't show how it works/how they implemented, and I don't like it. I want to know how it works, because when the shit hits the fan you are going to need it, so that you can troubleshoot it.

Big Fan off you posts and cheat sheets. Keep up the good work.

This was better explained than the CCIE Blog on Cisco website. Thank you!

Interesting read, I was looking for pvlan examples like this, thanks for the examples.

I would like to take the example a little further and ask the community if this scenario is possible. Rather than having the S1 connecting to a router, how about S1 connect to ASA-1 and S2 connect to an ASA-2, the ASA firewalls are connected to each other running in a failover active/standby mode, ASA-1 is active.

Great article. In labbing this, I discovered an interesting symptom when using an SVI. If you don't enable ip routing on the switch, you'll be able to ping back and forth with a promiscuous port but you will not be able to ping a device on a community/isolated port, nor will devices on those ports be able to ping the SVI. Your instructions say to enable ip routing but I forgot to enter the command while labbing from memory and it took me a few minutes to figure out what was going on.

If there would be a transit switch between S1 and S2, just acting as an intermediate switch and not connecting any routers or hosts, would it work if only VLANs 100-103 were allowed on the trunks with no PVLAN configuration at all?

Thanks for this, it really helped me a lot in understanding PVLAN using promiscuous access ports and SVI's. I do have one question. If the Switch connecting to the users is an L2 switch, what steps do I need to take in order for that switch to have an IP address for management? Do I extend the PVLAN SVI to the L2 switch as well and configure the private-vlan mapping in there as well? Does this mean I need to have an L3 switch capable for the user ports as well?

Great article thanks you so much.