Removing the Bottom Bar from the New Cisco.com

Over the last week or so, Cisco has been in the process of revamping its website. While at first the redesign was limited to the front page, it has begun to spread through to the technical documentation pages. 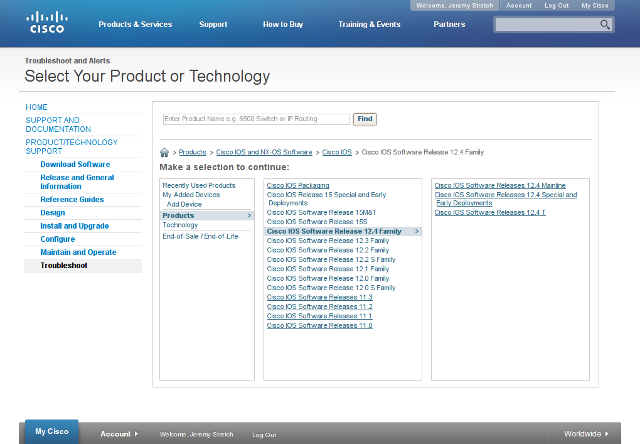 While the design overall is nice enough, the addition of a floating navigation bar attached to the bottom of the screen was perhaps ill-conceived, particularly for pages with considerable amounts of text.

Having grown tired of its distraction while reading, I threw together a very simple Greasemonkey (a Mozilla Firefox add-on) script to remove it. Since a number of people on Twitter expressed interest, I figured I might as well share my five minutes of work; the script is available here. Enjoy.

thanks! it was anoying..

Thanks Stretch! So I'm not the only one that annoyed then...

Clever. If you don't want to go to the trouble, though, Cisco will be making the toolbar collapsible in a couple of weeks.

If you're using OSX, you could also use Glimmer Blocker to achieve this. Just add a new, custom filter. Add a rule, and choose «Whitelist URL, optionally modifying content» as action. As host, you choose «is in domain», and type «cisco.com» in the field. Select the CSS-pane, and type the following;

This would effectively remove the bar.

You sir are the man, I was so close to opening a TAC case about that.

Ha, nice one Stretch It's really annoying I just never thought about investing time to remove it until I saw your post.

Update: We expect to have a collapsible version of the toolbar on Cisco.com within a week or so. When you click to collapse it, it will minimize and will stay that way until/unless you want to expand it again.

We didn't mean for this little bar to be annoying -- and the collapse feature was supposed to be there from the outset, so sincere apologies that it didn't make it into the initial release. But if you can wait another few days, then you won't have to hack your browser (unless you really like that kind of thing.)

I will post a little background on the bar and other aspects of the recent update on our Cisco Web Experience blog. (There is a bit on the design changes there now: http://blogs.cisco.com/webexperience/ )

The Grease Monkey thing works like a charm - thanks Stretch. Martin, it's nice to see input on these sites (forums) from representatives of the companies so thanks for your input and hopefully we can see you and others contribute more.

For what it's worth - the toolbar looks horrendous on an iPad. It is in the way of things I want to read. Please consider your (growing) iPad viewership!

FYI we have just updated the toolbar so that it is collapsible. Try it out, and see this short blog post for background: http://bit.ly/8ZyJbM

P.S. Thanks for the comments on the iPad. That's on the list. Especially since my wife keeps bugging me about that too.

It works on Google chrome also... Thanks!

BTW I wanted to mention that we removed the toolbar on the iPad a while back. Working on the Android devices, as well as taking the bar away for good and moving the key functions back up top.