The Community Lab is One Year Old!

I'm happy to announce that the community lab turned one today! On November 14th last year, the lab was officially opened to the community for free use. My loving wife baked a cake for the occasion. 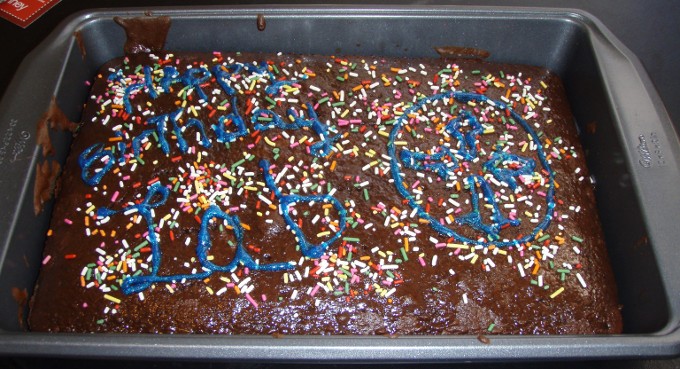 In its first year of operation, the lab has seen over six thousand reservations and several hardware additions. It has also served as a huge learning exercise for me.

How the lab has grown

User donations have enabled the lab to expand a bit from its initial offering. Monetary donations funded the purchase of a Catalyst 3560-24 to replace one of the Catalyst 3550s, which was soon matched by the extremely generous donation of a second 3560 from one individual who wishes to remain anonymous. The lab also acquired a handful of Cisco IP phones thanks to a donation.

Just recently the lab also welcomed its second corporate sponsor, Force10 Networks, who sponsored one of their S25N GigabitEthernet switches. As of this weekend, the S25N is available for reservation in the lab under device block C.

Damage Control. While it is definitely necessary to implement some safeguards to prevent people from accidentally deleting software images on devices, this hasn't been as big an issue as I anticipated (knock on wood).

Abuse. Sadly, some people will abuse a free service. The lab's biggest problem right now is that greedy individuals attempt to create multiple reservations under false user accounts, hogging as much lab time as they can for themselves. I've even caught people attempting to sell lab time to others. I have a zero-tolerance policy for any of this, and to date have blocked over 50 IP prefixes, totaling roughly 2.3 million individual addresses, from accessing the lab.

What's next for the lab?

I have three major goals for the lab now. First, I would like to get a few more devices from other vendors in the lab. Unfortunately, I am limited with regard to how much gear I can host in the lab, so I have to be selective.

Second, I've been pondering setting up a server dedicated to the lab, which could host virtual machines to fulfill a variety of roles, including:

Lastly, I've been wracking my brain trying to come up with a robust solution for the abuse problem. Blacklisting IP prefixes is moderately effective (especially since they are blocked from accessing the lab itself, not just the reservation system), but punishes many potentially honest users for the actions of a few miscreants. Unfortunately I haven't been able to come up with any better solutions. If you have an idea feel free to leave a comment, or if you prefer, contact me directly.

I want to close this post by acknowledging all of the people who have helped make the lab better, whether through donations, sponsoring equipment, feedback, or simply helping to spread the word. Thank you!

Thanks a lot Jeremy!...You have made our lives better...A student like me could not afford to buy equipments and practice...Thanks a ton for this generous service!...

I'd like to hoist a tankard (of the beverage of your choice) to both the Lab and to Stretch for caring / feeding / making the lab possible.

Thank you Stretch for the great opportunity you giving us.

Thank-you Jeremy for your superb work and generosity in setting up and providing lab access without any sort of monetary compensation.

Your lab was an inspiration for setting up my own, I plan to have a CCIE R&S INE topology when completed. It is somewhat of a unusual and clever setup in that it is using a logical/physical hybrid topology (routers are all logical(running on GNS3, where router ports are binded to NIC ports(2XQuadNICS Gigabit PCIEx4 & 2XDualNICs Gigabit PCIX) and switches are all physical(cannot emulate ASIC on GNS3, have 2X3550(24ports), require additional 2X3560 (24ports)).

May the Networking Gods, continue to smile and bestow their blessings upon you and the lab, plentifully and ever expandingly.

Happy Birthday, thanks for being so tolerant with us end users. Also thanks for providing such a wonderful free service! d(^_^)b

Thanks so much for providing this opportunity, stretch. Not much of us can afford lab equipments to aid our studies, so thank you for helping us out. Cheerios !

Happy birthday indeed. This is a very valuable service, Jeremy, and one that we should all be thankful to have. Keep up the good work!

Happy birthday to the lab. And thank you for setting it up and hosting it!!!

Happy birthday lab :) , thanks a lot Jeremy for this wonderful service

nice cake, you finish it all off yourself? :P

Thank you Jeremy, for your generosity. You have made studying accessible even to those that can't afford it. Thank you for the time and effort you put into this service. cheers from South Africa

Congrats on one year! I have been visiting your site well before it had a lab.

I have some suggestions for the lab. I think you should set aside a slot or two for users who could use the lab to teach others. For example, these users could record how to implement different topics and then upload the videos for people to follow on youtube. Trial and error is good, but sometimes seeing a topic implemented correctly can help someone understand better. It would be similar to some of the CCIE bootcamp videos. Also it would be cool to have a group feature so a small group of users could utilize the lab together. Each user could take turns working on the prepared lab and see what the person is doing.