A Brief Review of the Fluke MicroScanner2

I was asked recently by a student in one of my CCNA classes what I use to test cables. There are a number of cheap cable testers available for as little as $30 USD, but when it comes to tools, never buy cheap. A good quality cable tester will quickly pay for itself in hours saved troubleshooting or second-guessing test results. That isn't to say you need to fork over a ton of cash for top-of-the-line equipment; I picked up a Fluke Networks MicroScanner2 a few years back for under $400 and I love it. 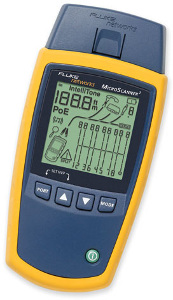 The MicroScanner2 is the successor to Fluke's original MicroScanner, which was also an excellent product. It has a dual RJ11/RJ45 (technically 8P8C) jack and a coaxial F connector. It has a large back-lit display and runs on two AA batteries. Its graphical interface is very intuitive if somewhat simplistic. 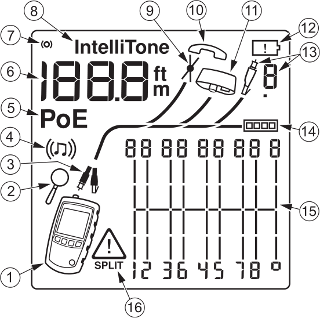 There are three modes of operation:

The wiremap feature can be used with or without the snap-off terminator (the purple part at the top); the advantage of the terminator is receiving more precise information about open and shorted pairs.

You can buy the MicroScanner2 alone or as part of a kit, which includes a Fluke IntelliTone probe, additional numbered terminators, and some miscellaneous patch cables. Personally, I opted to buy the standalone tester and pair it with a Greenlee/Tempo 200EP inductive amplifier (tone probe) which I've used extensively. Together they have served me very well over the years. 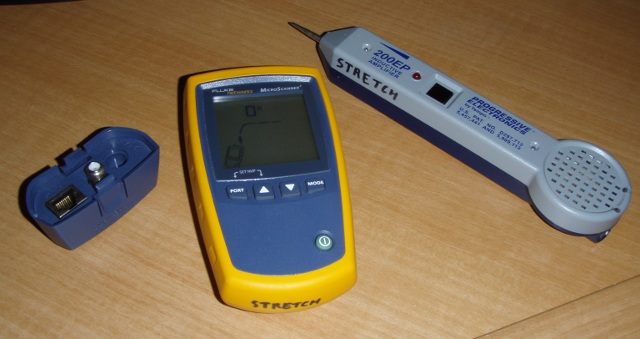 Stretch,
nice article. I was wondering does your device do ping/dhcp client or cdp?

I found a device by fluke networks called the "linkrunner".

I can plug it into a patch point, a led lights if it's connected to a device, if not it will give me the length of the cable. You can get it to flash the led back on the switch too so the connected port can be identified.

It can generate tone.

It does dhcp client and will ping it's default gateway and the dns servers.

Finally it does CDP and extremes equivalent, so you can tell what port you're connected into.

This cost me circa 250€ a couple of years ago and has saved me tonnes of time troubleshooting.

I've used simular fluke testers before and they are great, but recently i have been using cisco's tdr command to do on the spot cable testing as well. although i do have a question, how do you feel about (NEXT) near end cross talk testers? and could you recommend one?

For anything above layer one, I recommend a laptop with Wireshark on it, which can do everything the expensive tools can and more.

well, it sounds good to know a device with easy handling, if it does cdp. this article is right in time for a little project to document 1800 ports. sadly a laptop takes too long: 5 minutes per port are 18 workdays while 30 seconds per port are only 2 days of work.

thanks for the article

While a laptop will (eventually) tell you most of what you need, it will not tell you there is a short in the cable at 75.4m away. If you have lots (hundreds) of cables to check every month a Fluke will easily pay for itself in saved time, runs off a couple of batteries and is very small and lightweight.

Layer one should be your first check, and if you can quickly rule it out all the better.

Every datacentre engineer should have one.

@Steve: "For anything above layer one" ;)

@Avi: What takes five minutes on a laptop but only 30 seconds with an embedded test tool?

While it doesn't have as many features as the Fluke I have a Test-UM LanRoamer, that is pretty handy..