"6to4 tunneling" is an IPv6 transition mechanism described in RFC 3056. Like many other transition mechanisms, it enables encapsulation of IPv6 packets into IPv4 for transport across an IPv4 network. What's really neat about 6to4 is that it allows for automatic IPv6-to-IPv4 address translation, and treats the underlying IPv4 network as one big non-broadcast multiaccess (NBMA) network, rather than a collection of independent point-to-point links. 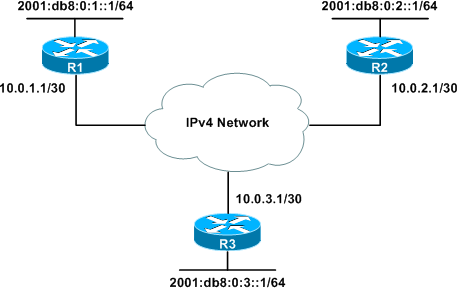 Three sites, each with its own IPv6 LAN, are connected to one another via an IPv4-only backbone. One way to connect the IPv6 LANs would be to configure individual point-to-point IPv6-in-IPv4 tunnels, so that each site would have an individual tunnel interface to reach every other site. This is a fair solution for our scenario with only three sites, however it obviously does not scale well, requiring n(n-1)/2 tunnels for n sites (e.g. ten sites would require 45 tunnels for full mesh connectivity). 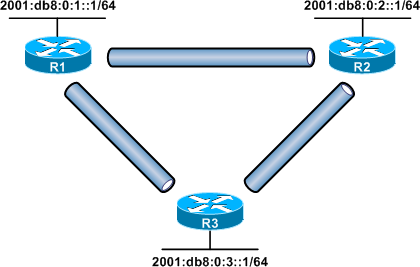 A more efficient solution would be to use automatic 6to4 tunneling. 6to4 works by taking advantage of a reserved IPv6 prefix, 2002::/16. A 6to4 tunnel interface automatically converts the 32 bits in its IPv6 address following this prefix to a global unicast IPv4 address for transport across an IPv4 network such as the public Internet. Before digging any deeper into the theory behind 6to4 tunneling, let's look at the configuration involved.

To configure 6to4 tunneling, we first need to create a tunnel interface on each dual-stack edge router. There are three key components relevant to 6to4:

On R1, we create the tunnel interface, configure it as 6to4, and specify its cloud-facing IPv4 interface as the tunnel source:

To the determine the IPv6 address of the tunnel interface, we convert the IPv4 source address to hexadecimal in IPv6 notation, so that 10.0.1.1 becomes 0a00:0101. then we append it to the 6to4 prefix (2002::/16), and fill the remainder of the address with zeros. Host masks (/128) are used for 6to4 addresses in this article, although other prefix lengths (and addresses within the /48) can be used as well.

Note that, unlike when configuring point-to-point tunnels, we have not designated any tunnel destination addresses.

Now that the 6to4 address of each router is known, we can go back and add the necessary static routes to achieve IPv6 connectivity between all three routers. Three static routes must be added on each router. The first indicates that 2002::/16 is reachable out of interface Tunnel0. The other two are routes for the individual /64 prefixes at either of the other sites, which are to be routed via the 6to4 tunnel.

At this point we should have IPv6 connectivity among the IPv6 LANs at all three sites:

The logic behind 6to4 tunneling may not be readily apparent. Let's trace the path of an IPv6 packet from a host behind R1 to a host behind R2. The packet begins as a normal IPv6 packet with IPv6 source and destination addresses. These addresses do not change for the life of the packet.

R1 receives the IPv6 packet and compares the destination IPv6 address against its IPv6 routing table.

This is where 6to4 comes into play. As the IPv6 packet is routed out of Tunnel0, it is encapsulated into IPv4. The source IPv4 address for the new header is taken from the tunnel source address. The destination IPv4 address is calculated from the next-hop address of our route for 2001:db8:0:2::/64; 2002:a00:201:: is converted to 10.0.2.1 using the reverse of the process we used earlier to decide the tunnel interfaces' IPv6 addresses.

The encapsulated packet is routed through the IPv4 cloud until it reaches R2. The IPv4 header is stripped upon entering R2's 10.0.2.1 interface. The remaining IPv6 packet is routed onto the IPv6 LAN toward Host B.

Also note that despite its NBMA nature, 6to4 tunnels are still tunnels, requiring both an ingress and egress IPv6 interface; they cannot be used to communicate directly between IPv4 and IPv6 hosts.

Thanks for another great article! Please could you change the link formula? As written it implies n raised to the power n-1 divided by 2, as opposed to n multiplied by (n-1) divided by 2.

Another awesome article. The last sentence makes me curious however...

Say you have an IPv6 ONLY network. What would you need to allow connectivity to the IPv4 world?

@guym: Fixed, thanks for catching that!

@eric: Ideally, IPv6 should be being configured to run in parallel with IPv4 (obviously the situation in the real world is less than ideal). There was an effort behind developing multiprotocol NAT (NAT-PT) at one point but I think that's been abandoned. Application-level gateways (ALGs) are one way to go. There's also RFC 3142, though I don't know whether the theory it discusses has been implemented successfully. AFAIK IPv6-to-IPv6 translation is still a work in progress.

As a newbie to IPV6, this gives a good example to do a GNS3 project. Will give me some experience with IPV6.

Nice article, like always very clear and easy to understand. It was my first hands on ipv6.

Hi Stretch, yet again great article as usual,
But I have few curious question related to IPv6. From ISP perspective.

--Second thing, if ISP take's IPv6 transit LINK, then can end user access all site normally or he can access only IPv6 sites and application?

And finally sorry for so many questions… I tried to search on Google; I couldn’t find the satisfactory answers.

How could be BGP would be configured instead of having static routes?

You will configure it the same way you do on IPv4; however, use the global IPv6 addresses for your neighbor statements:

Thanks for this awesome article. I was trying to look up the difference between generic ipv6ip and ipv6ip 6to4.

Nice article... a lot of this stuff is often overlooked in texts, your example is very nice however, covers everything!!! I understand that IGPs can not run across the 6to4 tunnels with the exception of BGP etc.

However, how would you go about bringing the actual 6to4 tunnels up without using the static routes to the other tunnel end points e.g.

Is it possible to bring the tunnels up with just the 2002::/16 static and some Dynamic Protocol on top??

Half an hour of reading your blog posts are more productive than 3 days of studying the same info in Ciscopress books. They are much clearer, informative and relevant.

Someone needs to pay you to write a book.

very informative and nice presentation. I would request for further revision if any in this and other artcles from your side.. thx for your time and clear way of presentation..

Great example. Is there any example for multicast traffic over 6to4 tunnel?

I must say that, as a beginner trying to learn 6to4, this tutorial massively confused me. Now that I understand 6in4 and, subsequently, 6to4... I can appreciate this article much more.

Otherwise, very nice article Jeremy. The only catch/question I would have is this: wouldn't this configuration require IPv6 hosts behind each router to have one or more of the following?

best explanation and example of automatic 6to4 on the internet.

i echo the sentiments of another poster, you should write for cisco as your explanations are a lot clearer than theirs, i came here in desperation as i couldn't understand the technology.

This is a really good explanation about automatic 6to4, as a matter of fact this is THE explanation. No need for more. Thank you so mutch, you save me lot of time, absolutely brilliant.

It's surprising IPv6 tunnel interfaces can be given only the network portion without the host portion of the IPv6 address.

Is it a built in mechanism in the 6to4 technology?

Is ND resolution required NH reachability from one island to another over 6to4 ? This should on same lines as Ipv6 over Ipv4 tunnel.

Question: What are the key differences between automatic versus manually configured IPv6 in IPv4 tunnel?