Last week, we examined how TCP uses sequence and acknowledgment numbers to keep track of data in bidirectional transit between two end hosts. However, we observed only an ideal TCP stream, where all packets are delivered to either end successfully, and in order. What happens if one goes missing?

The diagram below illustrates a TCP connection taking place between a client and server separated by a network. Time progresses vertically from top to bottom as packets are sent. 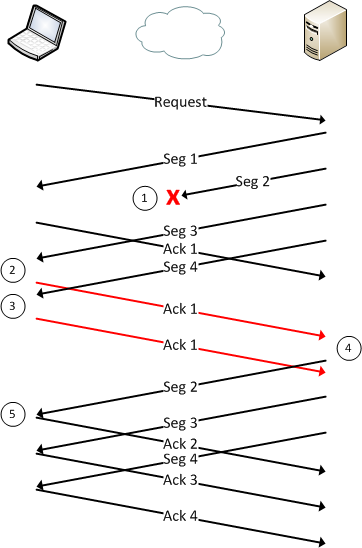 The client sends some request to the server, and the server formulates a response broken into four TCP segments (packets). The server transmits all four packets in response to the request. However, the second response packet is dropped somewhere on the network and never reaches the host. Let's walk through what happens.

The client receives segment #3. Upon examining the segment's sequence number, the client realizes this segment is out of order; there is data missing between the last segment received and this one. The client transmits a duplicate acknowledgment for packet #1 to alert the server that it has not received any (reliable) data beyond packet #1.

The server receives the client's first duplicate acknowledgment for packet #1. Because the client has only confirmed receipt of the first of the four segments, the server must retransmit all three remaining segments in the response.

The second duplicate acknowledgment received from the client is ignored.

The client successfully receives and acknowledges the three remaining segments.

You've probably noticed that this design is inefficient: although only packet #2 was lost, the server was required to retransmit packets #3 and #4 as well, because the client had no way to confirm that it had received those packets.

This problem was originally addressed by RFC 1072, and more recently by RFC 2018, by introducing the selective acknowledgment (SACK) TCP option. SACKs work by appending to a duplicate acknowledgment packet a TCP option containing a range of noncontiguous data received. In other words, it allows the client to say "I only have up to packet #1 in order, but I also have received packets #3 and #4". This allows the server to retransmit only the packet(s) that were not received by the client.

Support for SACK is negotiated at the beginning of a TCP connection; if both hosts support it, it may be used. Let's look at how our earlier example plays out with SACK enabled: 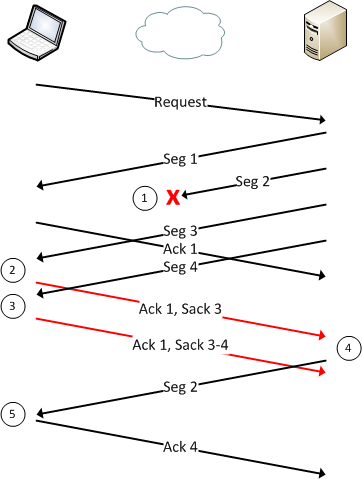 The client realizes it is missing a segment between segments #1 and #3. It sends a duplicate acknowledgment for segment #1, and attaches a SACK option indicating that it has received segment #3.

The client receives segment #4 and sends another duplicate acknowledgment for segment #1, but this time expands the SACK option to show that it has received segments #3 through #4.

The client receives segment #2 and sends an acknowledgment to indicate that it has received all data up to an including segment #4.

This packet capture contains a demonstration of SACKs in action. We know that both end hosts support selective acknowledgments by the presence of the SACK permitted option in the two SYN packets, #1 and #2. 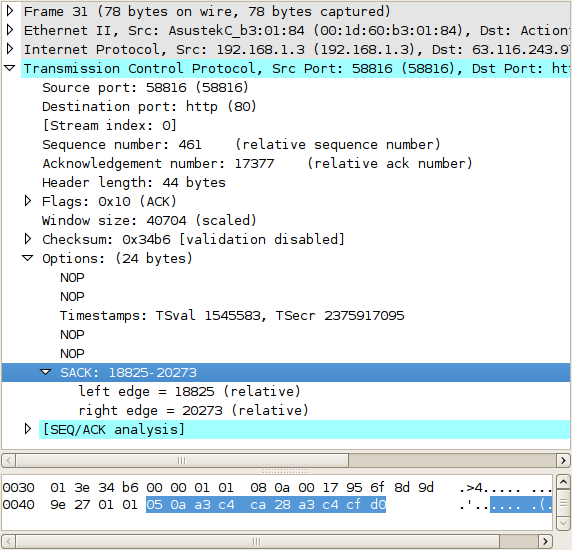 Of course, the SACK option cannot simply specify which segment(s) were received. Rather, it specifies the left and right edges of data that has been received beyond the packet's acknowledgment number. A single SACK option can specify multiple noncontiguous blocks of data (e.g. bytes 200-299 and 400-499).

We can see this duplicate acknowledgment repeated in packets #33, #35, and #37. In each, the SACK is expanded to include the noncontiguous segments the server has continued sending. Finally, the server retransmits the missing segment in packet #38, and the client updates its acknowledgment number appropriately in packet #39.

@Guest: Fixed, thanks for the heads up!

Thanks again stretch - your first TCP post was on the day of a job interview, where I needed to understand this (the company works in WAN acceleration products). I WAS asked about TCP and was able to provide an adequate reply.

Incredibly - they did also ask about SACK (you hadn't posted this yet) but I couldn't answer. They were happy enough though - they will be training me once I start.

Now I know what SACK is too.

but how can I enable selecctive acknowledge in my os

It's probably on by default, but on Linux you can check with:

check the sysctl(8) man page for more info (or you can alter the contents of the files in the /proc virtual filesystem directly).

Also, note the dsack, which is a duplicate SACK.

Great tutorial. Thanks. But in TCP ACK is the next expected one. But why the recieved one given here?

Agreed with last one, it should show the on it expecting not the one already received.

Hi, I was wondering if the sender (in the capture example) actually uses the received SACK information in order to decide what to retransmit and when to do it. I may be wrong but it seems to me that the retransmission of packet #38 is triggered by the fast retransmit algorithm. Wouldn't it have been the same even without the SACKs?

thanks for the nice article further to clear the word multiple : "A single SACK option can specify multiple noncontiguous blocks of data" according to RFC & TCP Header size limitation.
RFC 2018 - section 3. Sack Option Format " A SACK option that specifies n blocks will have a length of 8*n+2 bytes, so the 40 bytes available for TCP options can specify a maximum of 4 blocks. It is expected that SACK will often be used in conjunction with the Timestamp option used for RTTM [Jacobson92], which takes an additional 10 bytes (plus two bytes of padding); thus a maximum of 3 SACK blocks will be allowed in this case."

Nice tutorial. And a cool CAPTCHA challenge! How did you implement this?

Nice Description. This is what a need. If you have more of these. That will be great.

Awesome dude...I want you to write the new technologies....

Great document, nicely described. I do have a question which could be off-topic. Why is that every TCP packet in the capture has ACK flag set. After 3rd packet Syn-Ack, I was not expecting the client to send http GET with ACK flag set. Can you clarify this?

Thanks for the great explaining.
just a question, when using SACK,as you demonstrated,the lost segment#2,is only re-transmitted after all the data is received first, doesn't that means that segment#2 is delayed for a long time assuming we have alot of packets ?
Thanks,
Mhmd Kh

Good job with the diagram! reading the rfc was a struggle until I searched out your readymade diagram. Thanks!

Thanks a lot, a thorough explanation!!

Incredible post! This was so easy to understand the way it was presented. Thank you so much!

really helpfull to me. thanks guy.

Very good explanation about SACK. All these days I was hitting the arrows in dark understanding the sACK.

I am really excited to know how you generated this tcpdump to demonstrate SACK.

Stretch this is very good piece of work. It is very clear. Thanks for the time and effort you put into this. Well done.

@Vinodh Kumar Every TCP segment carries an Acknowledgement number an has the ACK flag turned on as this does not add any extra overhead to TCP, since the Acknowledgement number field is always present in the TCP header. The only exception is the SYN Segment used to initiate the connection (in the 3WHS). Just thought I'd add this for anyone else who was curious about this.

Thanks for sharing it.

Thank you! Looking forward for your reply:)

this is captured on the client

Packets 9-14 are the following:

Am I reading this right? If I am then it looks like the client is not Acknowledging the first packet correctly although it received it because it was on the capture?

The first step 5 maybe is wrong: "The client successfully receives and acknowledges the three remaining segments." Not the server?

Should the first ACK1 be considered a normal ACK instead of dup ack?