A couple weeks ago, Opengear sent me one of their small new console servers to play with, specifically their ACM5000 series. My particular model is an ACM5003-W, which sports three RS-232 serial ports, two USB ports, a 10/100 Ethernet interface, and interestingly, an 802.11b/g wireless interface. 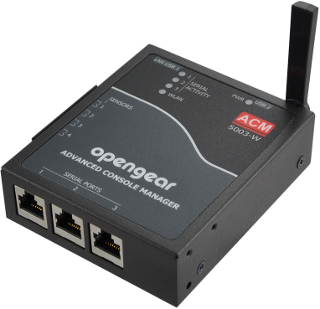 Although small, the ACM5000s run powerful firmware very similar to their larger relatives, like the CM4116 which powers the community lab.

What I really like about these boxes is that they're small, cheap, and bring a lot of flexibility to out-of-band management. They can be mounted along with gear in hard-to-reach places (access points, telecom closets to which no one ever has the key, etc.) to provide wireless console access from a much more comfortable location. The wireless adapter supports both infrastructure and ad-hoc mode with WPA2-PSK security. 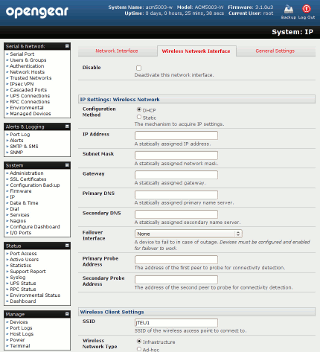 Opengear also offers models with a V.92 dial-up modem or a 3G cellular modem in place of an 802.11 adapter.

Very Cool! Wish I had this when I was managing a corp training center. It consisted of 7 classrooms, 7 large lab systems (telecomm & IT gear), and a semi-isolated network tying it all together. Problem was, IT controlled the IDF closets, so I had to beg and plead ever time I needed to change / fix anything...

I wonder how IT would have reacted if they found this hiding in the cieling tiles... ;-)

What are the USB ports intended for? Are they useful?

interesting idea, though if you should count on the wireless network being fine when you need out of band access to devices ...

Wondering if you can connect to it with VNC and see the bios of the computer booting?

Cool thing. @patrick yah install a laptop with a webcam and watch how pc/device boots up.. though it would not be a bad idea to have someone press F1 when keyboard error isn't disabled :P