EtherChannel is Cisco's term for bundling two or more physical Ethernet links for the purposes of aggregating available bandwidth and, to a lesser extent, providing a measure of physical redundancy. Under normal conditions, all but one redundant physical link between two switches will be disabled by STP at one end.

With EtherChannel configured, multiple links are grouped into a port-channel, which is assigned its own configurable virtual interface. The bundle is treated as a single link.

An EtherChannel can be established using one of three mechanisms:

Any of these three mechanisms will suffice for most scenarios, however the choice does deserve some consideration. PAgP, while perfectly able, should probably be disqualified as a legacy proprietary protocol unless you have a specific need for it (such as ancient hardware). That leaves LACP and "on", both of which have a specific benefit.

LACP helps protect against switching loops caused by misconfiguration; when enabled, an EtherChannel will only be formed after successful negotiation between its two ends. However, this negotiation introduces an overhead and delay in initialization. Statically configuring an EtherChannel ("on") imposes no delay yet can cause serious problems if not properly configured at both ends.

To configure an EtherChannel using LACP negotiation, each side must be set to either active or passive; only interfaces configured in active mode will attempt to negotiate an EtherChannel. Passive interfaces merely respond to LACP requests. PAgP behaves the same, but its two modes are refered to as desirable and auto.

Only a single line is needed to configure a group of ports as an EtherChannel:

As noted, a virtual port-channel interface Port-channel1 has been created to represent the logical link. Switchport configurations applied to this interface are replicated to the physical member interfaces. We can inspect the health of the EtherChannel with the show etherchannel summary command:

The opposite side of the LACP EtherChannel will typically be configured as passive, however it can be active as well.

When the member ports on both sides of the EtherChannel are enabled, the port-channel interface also transitions to the up state. However, note the timing of the system messages:

Almost a full three seconds elapsed between the member ports transitioning to the up state and the port-channel interface coming up. Once it did, we can see the state of the EtherChannel has changed to "in use":

Note the S indicating layer two operation; on multilayer platforms, EtherChannel interfaces can be configured for routed operation as well.

For comparison, let's reconfigure the EtherChannel to function without a negtiation protocol ("on" mode):

This time we observe that the port-channel interface is enabled as soon as its first member port comes up, as there is no delay imposed by negotiation:

In the Campus Network High Availability Design Guide, Cisco recommend forgoing the use of a negotiation protocol and configuring EtherChannels for static "on/on" operation; however they also caution that this approach offers no protection against the effect of misconfigurations.

Another consideration to make when implementing EtherChannels is the type of load-balancing in effect. EtherChannel provides load-balancing only per frame, not per bit. A switch decides which member link a frame will traverse by the outcome of a hash function performed against one or more fields of each frame. Which fields are considered is dependent on the switch platform and configuration. For example, a Catalyst 3550 can match only against a frame's destination or source MAC address:

The show etherchannel load-balance command reveals that source MAC address load-balancing is default on the Catalyst 3550:

More powerful platforms can match against IP address(es) or layer four port(s). Generally speaking, higher layer fields are more favorable as they tend to be more dynamic, resulting in a more granular distribution of traffic across member links.

Direction of flow is also an important detail. For example, consider the following topology: 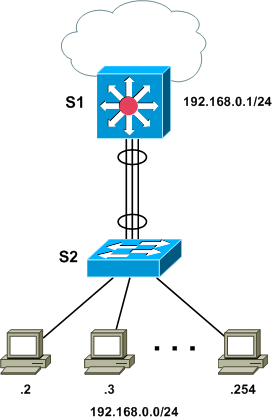 Routed packets entering the subnet from S1 are always sourced from the MAC address of the VLAN interface. If source MAC load-balancing is in use, these frames will be forwarded down only one member link, because the outcome of the hash function will always be the same. Configuring destination MAC load-balancing on S1 is recommended to achieve a more varied distribution of frames and make better use of the available bandwidth.

The opposite is true on S2: Since all frames entering the EtherChannel from LAN hosts are destined for the MAC address of the gateway (VLAN interface), source MAC address load-balancing works better here.

I've often configured etherchannels this way with the one line configuration and it does work without any problems. I'm wondering why there is even an option to define which protocol to use with the "channel-protocol lacp" or "channel-protocol pagp" command since you define the protocol with which mode is used: ie active/passive for lacp and desirable/auto for pagp. If anyone knows the reason or if anyone has tried or misconfigured it so that you defined the channel-protocol as one thing and the mode as another I would like to know the results. My lab is offline right now so I can't test without taking users offline.

nice write up on how to look at load-balancing techniques....been a perspective I have been wanting to see for a while...bringing in a little "real-world". Thanx

One thing to add. The number of links is also something to consider when planning an ether-channel. I think it was in the BCMSN book that discussed it, but even though you can have from 2 - 8 links in your ether-channel there are distribution advantages to the number of links related to the algorithm that is ran. 2, 4, and 8 links are the most efficient.

On a 4 member PO using mac load-balancing the following is true:

So if you were using src-mac load balancing on a layer-3 port-channel all the data would go down the same member, because the packet gets the interfaces source mac.

So the moral of the story is use 2,4,or 8 member Port-channels and your port-channels on distro switches need to use IP based load-balancing. While access can use MAC.

Hopefully my hex to binary math was right. I just banged this out real quick.

This Doc on Cisco.com gives lots of detail on this type of info on various switch platforms ( one cool thing is in a 6500 to test where a packet will be sent in a etherchannel using the command "test etherchannel load-balance interface port-channel" )

any one have used etherchannel over wireless link ?

While I never deploy PAgP anymore I would not totally dismiss it just yet. Cisco is recommending it on VSS as ePAgP can be used for dual active detection.

Also something to note with regard to Switch stacks from Cisco's docs located here:

I really like this article,it's simple but quite good for reference.thanks and hope that you'll post more.

Q: When configuring etherchannel between two switches, should they have the same number in both ends?

nice article, easy to understand. Thanks

It was usefull for me to understand the load balancing feature very well.
thanks

I run an IPTV company and I have high bandwidth requirements, I have 10Gbps incoming connection from my ISP.. so clients request my streams ( live channels streams) from my servers .. i'd like to build a server farm so they can all make requests to www.mychannels.com for example and then maybe ethernet channels will forward it equally to all my servers .. and if one of my servers goes down i don't want them to notice that, the traffic will again be forwarded to other servers, I get the server outta server farm fix it and get it back.

what do you think?

Jeremy, everyday when I have spare time at work I've been reading your blog, I have to say: it's been a great decision on my end. You have a skill to take the core of these concepts and express it in a brief, concise way. Man, that's some skill...

Good information!!!! Very useful!!!!!
Do you have any information how to configure Etherchannel using NAS box? or how it will communicate with switches using Etherchannel

Hello, Nice article! I'd like to mention an issue that I am having while adding links to an existing bundle. I have a 10 gig 12 links (12x10) bundle between cisco CRS1 and Cisco Nexus 7010. I want o add 4 more 10 gig links to the bundle to make it 16x10. On nexus I was able to create 16x10 bundle but on CRS1 I was only able to add one link but 3 other links getting error. The 3 links are up and running just fine but when I give this command "bundle id 50 mode active" and then do "commit" it does not commit and asked me to run "show configuration failed" command. The "show configuration failed" command doesn't really give any specific reason as to why the link can not be added. I am not sure what I am doing wrong!

Nervermind. I figured it out! I was configuring mtu on the interface which I shouldn't be doing. Interface takes the bubdle mtu that's why individual interface does not need mtu configured.

About the last part. I mean "Bandwidth and Cost"
I've heard that the number of links in Etherchanel must be 2 or 4 or 8 and so on.
For example having 3 links in a channel group doesn't give you more bandwidth than 2 links.
Is it right?

I have configured the etherchannel in L2 switch for 2 links but when a single link gets down packet loss is not coming but when the same link comes up i am getting the packet loss can any one suggest how resolve the problem.

Finally, a comprehensive explanation of the difference between LACP and static LAG's. Most "explanations" assume the reader knows what static is, passing it over in their explanation.