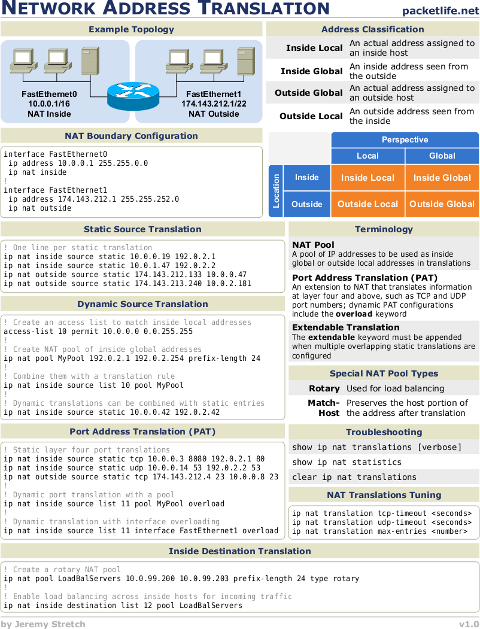 I realize it's been a while since I came out with the prior cheat sheet (though in fairness I did produce a pretty slick poster more recently). I promise I'll try not to wait so long before the next one.

Thanks for making these cheat sheets.

I'm greatly appreciate these informative articles and cheat sheets. I'd also like to ask what the reasoning was behind removing the visio cheat sheet template that you had previously made available on your site?

Will it be available again in the future?

hi, does it mean that OutsideLocal and InsideGlobal is the same?

thank you very much , using Pnat as port forwarding is new option for me .

Thank you , these cheat sheets are very useful ,i paste them on my study table before taking up the certification exam.

Hi group, Any one please tell me which software do you use to create cheats. I really needed to Make cheats of CCIE security and CCIE R&S

Thanks for this sheet. This was great. Helped me work out some issues tonight with one of my sites.

shakti555 - You can use any application. I think these were done in Visio but take your pic