Now that the community lab has been equipped with a Catalyst 3560, I have finally been able to write about private VLANs (which are supported only on Catalyst 3560 and higher switches). This article discusses the concept of private VLANs and includes a basic configuration example, with more complex configurations deferred for future articles.

Private VLANs were developed to provide the ability to isolate end hosts at layer two. To understand the motivation behind this feature, consider a colocation environment in which the network operator must connect servers belonging to different customers to the Internet. These servers must all be able to reach their first-hop router, but for security reasons, servers belonging to one customer must not be able to communicate with servers belonging to another. An obvious design solution for these requirements is to place each customer's servers in a separate VLAN, which also requires the assignment of a separate IP subnet per customer (even if they have only one server). 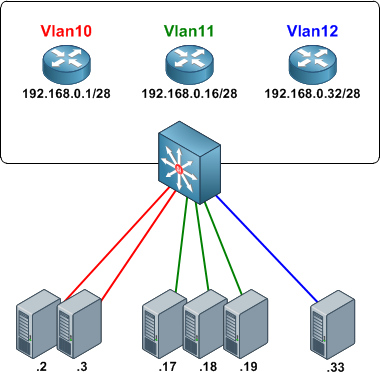 This approach wastes both VLAN IDs and IP address space. Private VLANs were introduced as a more elegant alternative, allowing multiple devices to reside in the same IP subnet, yet remain isolated from one another at layer two. 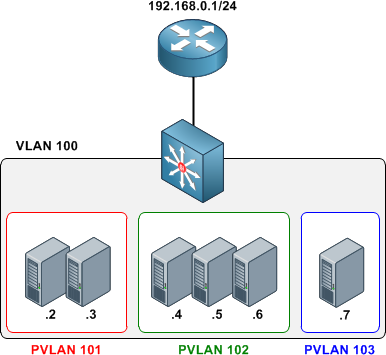 An access port assigned to a private VLAN operates in one of two modes:

We'll configure an isolated private VLAN to allow two servers owned by different customers in the same IP subnet to communicate with their first-hop router, but not with one another. 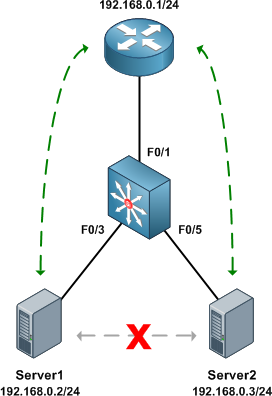 Before getting started with private VLAN configuration, ensure that VTP has been set to transparent mode. There are numerous reasons for running VTP in transparent mode beyond the scope of this article, and to enable private VLANs it's explicitly required.

As with normal VLANs, private VLANs must be created before they can be used. Upon creation, we must also define a type (isolated, community, or primary) for each. We'll create our secondary VLANs first, then our primary VLAN. The secondary private VLAN is mapped under the configuration of the primary private VLAN.

Next, we designate our private VLAN interfaces. Our uplink port to the router will be set to promiscuous mode, with the primary VLAN mapped to the secondary VLAN.

Our two server ports will be configured in host mode:

At this point our private VLAN configuration is complete. We can verify private VLAN interface assignments with the command show vlan private-vlan:

Finally, we can verify that the router can communicate with both servers, but the servers cannot communicate directly with one another.

I've read about private vlans at cisco recently. I must admit I like it but hmmm.... there will be some complications if u get the topology too complex. I see this as OSPF like. vlan in a vlan God damn it's very flexible.

I always wondered what the pvlan mode was used to - promisc/host - now I know. It also gets very interesting because there is a third mode - trunk, which is supported on some 49xx metro switches afaik.

One gotcha related to PVLAN is to look for "ip local proxy arp"....just in case :-)

Umm, the subnet mask in the first picture looks... weird. In order to have different subnets, shouldn't those be /28s?

@Gabriel: Whoops, my mistake; they should indeed be /28 masks in the first example. Sometimes I subtract when I should add. Fixed it now, thanks for the heads up!

@Skeebers If he follows the same convention (GW being first usable) then yes you are correct.

@Stretch, In the paragraph of Next, we designate....mapped to the seconary VLAN. I believe the word "seconary" should be "secondary".

I actually thought private VLAN would be a good implementation instead of passive-interface. Usually when you connect EIGRP neighbors with switches, they will be error messages saying they are not on the same subnet. Using private (isolated) VLAN not only separates the routers and connect them to a central router, but effectively separate different routers. On the other hand, if you wish to exchange information other than routing information, you can use community VLAN to control they talking with each other.

This would be a very handy feature at a college campus to prevent student machines spreading infections amongst each other. Does anyone know if HP ProCurve equipment is capable of this, or if not if it's likely to feature soon?

I was studying pvlan for my CCNP and this article really helped me... i really appreciate your work Stretch!

@Paul: Not sure whether HP ProCurve devices support PVLAN but one thing you might want to watch out for in using PVLAN to stop student machines (I'm assuming college-owned lab workstations here) from talking to each other is your Desktop teams image-deployment/software-deployment solution. At the University where I work our Desktop team use an application that has a feature that allows devices that are mapped in the same zone (essentially the same subnet/VLAN) to get software/images from each other, rather than always having to query the central server. This has some benefit for the network in that potentially heavy traffic flows (imaging) are partially contained within a VLAN rather than always traversing the entire network.

How do I know this? I raised the idea of PVLANs at a Change Meeting where, thankfully, the TL for the Desktop team was present :)

befoe i don't know about private VLAN . now i got it . thanks

What if there is no uplink port to a router, and we use a vlan interface as the gateway for hosts. Can you configure the SVI as promiscuous?

Is it possible to allow some type of traffic between community vlans ?

before i know about private VLAN but on that time, i was some confused . now i got it . thanxxxxxxxxxxxxxxxx dear

Is there a difference configuring private vlan on 3560 and 3560G?? I could not make pvlan to work on 3560G on your lab and strange thing i note while configuring pvlan is that after completing configuration the cdp neighbour output from switch gets blank!! and when you send a test ping all host reply whether they are community or isolated! and when you issue show int gi0/2 switchport, output returned is Operational Mode: down! I have failed to make it work on this Gig switch !

While its the opposite on 3560-TS and pvlan works as expected!

Any thoughts would be highly appreciated!

some outputs for your review..

Tried both and they don't work!

While this is the configuration that kept failing on 3560G R2,R4 and R6 used as hosts.

Good one Jeremy. Your posts are always simpler, concise and easy to understand and grasp concepts. you are doing a great job for the networking community.
Please keep doing the good work.

Nice job with this one Stretch!

Do we have any examples on two-way community PVLAN usage?

Great article Jeremy. It provides timeless value as i stumbled on this over 5 years later! I understand that isolated ports can't communicate with each other directly, but I wasn't clear if they can communicate to each other through the promiscuous or router port. Did you have to put an ACL on the router? What exactly prevented Server1 from pinging other servers?