What Happened to the Behavior Dialog in Visio 2010?

One thing that irked me when learning Visio 2010 was the mysterious disappearance of the object behavior dialog. The behavior dialog is useful for modifying, well, the behavior of elements within Visio (e.g. which lines show line jumps and what those jumps look like). In previous versions of Visio, it had been accessible via the right-click context menu (after selecting a line or shape) as Format > Behavior.... Alas, this option has disappeared from the context menu in Visio 2010. 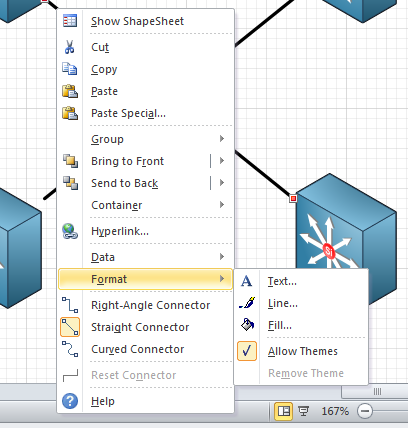 In fact, upon initial inspection it appears to have been removed from the application entirely. Only after a good deal of searching did I uncover its hiding place: the developer menu. The developer menu is, of course, disabled for a default installation of Visio. To enable it, select the File tab and click Options. Under the Customize Ribbon heading, click the Developer tab checkbox to enable the developer toolbar.

You should now see a developer tab at top which displays the developer toolbar, complete with a button for the behavior dialog under the Shape Design section.

Yeah, I've been trying out some new icons. Might do a post on them in a bit if I decide to stick with them.

I just can't get enough of this site! Slashdot, linuxtoday and this.. those are the one's I open now.

Staying on Topic, THIS is why I don't use Visio anymore... that and I don't have any Windows left in the shop. But I use to have a VirtualBox with Windows just for Visio.. not anymore. I just use Dia. I have even converted a couple of Windows guys to i. It doesn't look as nice, but for FREE, nobody seems to care when you give them your basic drawings.

Anyway, thanks for this place!

I was JUST looking for this two days ago! Thanks!

I have hated Microsoft ever since they removed the "recorder" from Windows 3.1. It was a program that would record your every mouse move and click so that you could play it back. They must have taken it out because they stole the code from someone and forgot to buy the company who wrote it. Microsoft is evil. Do not even get me started.

Try Linux, I use CENTOS. I really like it :)

Anyway, where are the corner roundings and connector line jump settings in 2k10? Should they be manually added to Custom ribbon tab to Home or simillar?

Thanks so much! I recently installed Microsoft's 2010 version for another feature and almost ditched it because I could not figure out how to do this simple task!

You have saved me from an ugly diagram once again! A mighty oracle you are.

I've been looking all over for this.

Thank you. This is exactly what I'm looking for.

Thank you! Just was I was looking for and the help topics didn't seem to understand me... and just by the by, do people really type Visio 2k10 instead of 2010? lol indeed.

Thank you, thank you, Jeremy!

And Microsoft...is this "improvement" some kind of an evil joke?

Thank you! Very easy to follow article. Now I can use "behaviors" again!!!

Thank you it was driving me crazy!

This is a question about Visio 2010 that has also annoyed me on and off for many months. But thanks to you for sharing quite simply how to overcome Microsoft again. Now I can turn off that unwanted line-splitting and rerouting for my notation boxes. Cheers!

Thanks Stretch, why the heck did they do that?!?!?!

Thanks - thought they removed that function entirely in 2010, handy...

This is very helpful. I did tons of looking around and none of the so called experts could help !

I was about to pull out all of my hair, before I saw your post. I couldn't believe that they would get rid of this function. Apparently they didn't, but hid it well enough so no one could find it. Thank you so much for posting this!

Visio 2010 is driving me nuts. Thanks for this tip.

It seems that whenever I open one of our block diagrams, it automatically changes the page size, and then moves connectors around all over the place, meaning that straight lines now take a crazy round-about route, with arrows that no longer point into the boxes that they join. Don't even get me started about what happens when you try to delete a resistor to change it to a capacitor; half the circuit diagram automatically disappears in front of your eyes!

Thanks much for the tip -- Visio 2010 was driving me crazy! Not sure why they decided to stash much of the most useful functionality under the "Developer" menu, then hide THAT under such an obscure option like "Customize Ribbon." You can trust autolayout with only the simplest diagrams -- why does Microsoft need to make everything so hard?

Like my local supermarket (Giant), who last month remodeled, adding nothing, but making it hard to find ANYTHING!

Thanks again - you're a lifesaver!

Wow, thank you! I have a chart from Visio 2007 where I previously used this, and I needed to change some of the double-click settings in the chart. I could not find the command in Visio 2010, and the "help" has absolutely NOTHING about this.

Is there a way to change this default to one of the other selections? For example, I'd like it to be "Do not lay out and route around".

This setting seems to put me in control of my object placement rather than visio.

is there anyway to resize a swimlane in ms visio 2010 with shapes that span across multiple swimlanes? tried everything on the behaviour and protect options in developer tab but surely this is not that unusual request??