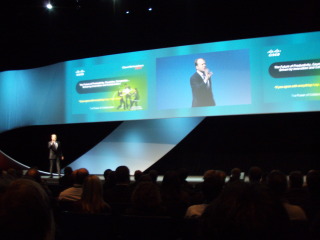 Networkers has been pretty fun so far! Those of you following me on Twitter may have already caught a few bits and pieces, but here's my experience so far.

On Monday morning I got in just as the doors opened at 0800. Registration went very smoothly even with the impressive number of people flooding in. I wandered around a bit, enjoying complimentary breakfast stuffs and waiting for my Enterprise Campus High Availability techtorial to start. (Techtorials are optional add-ons to the conference attendance, comprised of a single full-day class.)

As luck would have it I got flagged down by Greg Ferro of Etherealmind, having apparently recognized the shape of my head. It's always nice meeting a fellow blogger in person, and he wouldn't be the last of the conference. My techtorial proved to be a great choice, doubling as both a refresher for my R&S written exam later in the week and filling in some cracks that had been left unnoticed when studying the topics independently.

After the techtorial was the IPv6 "Birds of a Feather" talk, or BoF. A number of IPv6 experts were present to share their organizations' experiences with IPv6. The talk was interesting if not particularly educational.

Tuesday began with the majority of the Networkers in attendance being herded into the main auditorium for John Chambers' keynote speech. As people were getting settled and I was fiddling with my camera, I looked up an bam there's Chambers standing five feet in front of me. He was ambling through the crowd asking people what they'd like to hear him talk about in his presentation. His presentation that he was going to give to several thousand people ten minutes from then. Unfortunately I couldn't think of anything to suggest that didn't sound horribly trite at the moment.

Chambers is a pretty amazing speaker, very charismatic and personable. I was in one of the foremost rows and noticed he often spoke directly to members of the audience (myself included). His presentation focused heavily on Cisco's concentration on long-term goals; he explained that in this time of economic crisis the companies which look years down the road rather than months are much better positioned to come out on top. There was also a big push for more streamlined collaboration, Telepresence (surprise), and energy savings.

After the speech, we cattle made our way back to the main building and dispersed for the multitude of smaller-scale talks. First up on my schedule was "Deploying OSPF in a Large-Scale Network." Again, nothing "new" for me here, but it was a great practical review. Next was a discussion panel on IPv6, which wasn't all that different from the BoF the day prior but did sport additional panelists and was mostly Q&A.

I decided to skip my IPv6 Security talk since I couldn't find the damned room. I've been doing a lot of my own research into IPv6 security recently anyway; look for blog articles in the near future! I ended up trolling the marketing pit -- sorry, "World of Solutions." This was one of the few instances my young age proved beneficial; most vendors assume I'm a nobody (the hoodie and cargo pants probably didn't help) and leave me alone. =) I also checked out the Cisco store, which had (I believe) every Cisco Press title currently in print, plus a bunch of shirts and other crap with the Cisco brand on it (see the gallery for pics).

On my way out of the store I bumped into Pashtuk from Just Another CCIE, another very cool guy. At some point all us bloggers need to get together for a group picture or something. My day wrapped up with a talk entitled, "Advanced Which Routing Protocol?" which unfortunately proved to be far less advanced than its title had asserted. Not a bad talk, but something I could have skipped.

That's it for now, with about half of Networkers left to go! And of course, I've been taking pictures for you all. More to come!

What! No pictures with you and the other said bloggers! Don't assume we all know the shape of your head. ;)

How would I recognise you if I bumped into you? I shall look thru you blog to see if you have any pics of yourself.

BTW, did you see the Brian Cox keynote? What did you think? The professor that looks like a rock star ... probably because he is also a rock star. He has also done some interesting programs on BBC about particle physics recently.

Just looked at your pic. Did I see you at the CCIE reception this evening?

Hey, looks just like the US Networkers, including the keynote and oh-so-cool demonstration. Will you be going to the US event too?

BAH! color me jealous. Wish I could have gone. I was reading about all the breakouts and sessions, it made me drool.

I skipped the first session today to catch up on some sleep. Need to head out in a bit for the one at 11.

@Kevin: Very short hair, usually carrying an orangish-brown hoodie and blue backpack. Wasn't at the CCIE reception (not a CCIE yet, unfortunately).

@Jason: I have no idea yet. I'd like to, but it depends on my next job and whether the talks differ enough from those presented at this Networkers.

Don't forget to post some pictures of the city as well. ;)

I was there too, and I'm so sorry to read it right now. It would be great if we met there. Well, maybe next year ;-)

What is your opinion about "Networkers" anyway? Did you like it? And do you think that was a technical orientated or more like business one? I'll say that I was expecting to hear more. Anyway, I enjoyed it at all. The organization was perfectly done (except the first day before the registration - they left us to stay outside until 18:00). So, I really can say many things, but I'm interested in your opinion.