I want to clear up something that has somewhat bothered me for a while now: "RTP" in EIGRP. RTP as referenced by EIGRP refers to Cisco's proprietary Reliable Transport Protocol, not the much more commonly discussed Real-time Transport Protocol characteristic of VoIP communications. This is an unfortunate collision of acronyms. 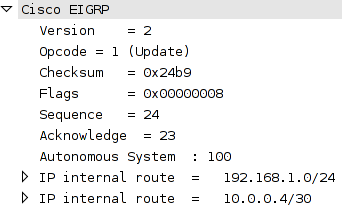 Sequence and acknowledgment numbers are used to provide ordering similar to TCP, but without any fancy windowing or congestion control (only one packet can be sent at a time). Additionally, hellos and explicit acknowledgments aren't transmitted reliably (they have no sequence number). 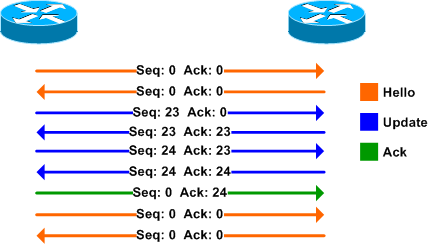 Another interesting detail about EIGRP RTP, is the ability to use piggyback acknowledgements instead of an explicit ACK. When a router has to acknowledge a packet from it's neighbor, he can just put the according ack number in any unicast packet destined to the other neighbor. I read about this behaviour the first time in "EIGRP Network Design Solutions". It can be observed in packets 15 and 16. 10.0.0.2 sends a routing updated and also acknowledges packet 15 from 10.0.0.1 in one packet.

Nice! This was always something that bothered me too. It really annoyed me how Cisco never really talked about how the two acronyms are not the same protocol either.

And this is what Cisco writes about RTP in the Internetwork Technologie Handbook:

"Reliable Transport Protocol (RTP) is responsible for guaranteed, ordered delivery of EIGRP packets to all neighbors. It supports intermixed transmission of multicast or unicast packets. For efficiency, only certain EIGRP packets are transmitted reliably. On a multiaccess network that has multicast capabilities, such as Ethernet, it is not necessary to send hello packets reliably to all neighbors individually. For that reason, EIGRP sends a single multicast hello packet containing an indicator that informs the receivers that the packet need not be acknowledged. Other types of packets, such as updates, indicate in the packet that acknowledgment is required. RTP contains a provision for sending multicast packets quickly when unacknowledged packets are pending, which helps ensure that convergence time remains low in the presence of varying speed links."

So, it is really documented.

But the problem with this "collision" is also with other acronyms like ASA: "Adaptive Security Algorithm" or "Adaptive Security Appliance". It's even worse in the official course-material of Cisco where POP in a provider-network was explained with "Post Office Protocol", HTTP Post in the Application-layer Firewall with "Power on Selftest" and the check of AV-DAT-Files through NAC with "Digital Audio Tape".

Cool post. I took a look at the packet capture and it answers another one of my questions. Namely, since RTP allows both unicast and multicast, how does it keep the routers from being confused from the skipped sequence numbers?

It looks like the answer is the "Next Multicast Sequence" TLV, which shows up in one of the Hello packets in this capture. This is sent out after it is done with the initial adjacency setup, which was unicast.

This also shows a little bit of another feature, which is called "conditional receive" mode. From what I could find online, it uses the "Sequence" TLV to list neighbors which are in unicast mode (either due to timeout or initialization), so they will know to ignore the following multicast packets. Then it sends the next multicast packets with the conditional receive flag set, so those neighbors will know to ignore the packets. Still not too clear on that one, but I think this is as good as it gets without any documentation from Cisco.

The latest version of the ICND2 text does give an explanation as to the potential mix up:

Great article, but I have still one question. Reliable Transport Protocol (RTP) is, as the name implies, a protocol. So, it should "lay" in some layer of the OSI model or, better (i.e., not so theoretical), of the TCP/IP Protocol Stack.

Since it seems that it has pretty-much the same functionallity with TCP (with some differences that you have pointed out) when it operates in a "reliable mode" (e.g., when the router sends update, query, and reply packets, that is, packets sent reliably and requiring an acknowledgment)and with UDP when it operates in a "unreliable mode" (e.g., when the routers sends hello or ACK packets), it makes sense that it is an OSI Layer 4 (Transport layer) protocol, as its name also suggests.

However, in the literature or in the web, I have not found so far in which OSI layer RTP fits. I think this is important because a Transport layer protocol is not actually a delivery mechanism. It is used only to guarantee a reliable end-to-end communication via sequencing, acknowledgements, etc. On the other hand, if RTP is just a part of EIGRP, then it may be a Network layer (Layer 3) protocol, and in that case it would be the delivery mechanism of EIGRP (or at least, the first delivery mechanism of EIGRP packets, because after that the EIGRP packet is encapsulated inside a Layer 3 packet, being an IP packet or an IPX packet or whatever, depending on the Protocol-Dependent Module (PDM)).

If someone knows, please help ... Thank you!

I'd say that RTP is not a protocol. It is a feature (or mechanism) of the EIGRP. If it was a protocol you could seperate this from EIGRP somehow - which you can't.

@Samba: A protocol is any set of rules which govern some action or communication; a networking protocol doesn't necessarily have to exist as a distinct header in a packet capture.

excellent post! very nice explanation. This thing bothered me too.