JUNOS as a second language

Over the last few days I've been reviewing Juniper's free training material titled "JUNOS as a Second Language." This was released a while back as part of a Juniper certification promotion, but I've only recently gotten around to watching it.

What Juniper has done here is pretty clever: the training capitalizes on its audience's existing knowledge of Cisco IOS syntax in order to teach its own operating system methodology. This is quite beneficial to engineer with Cisco experience, as it saves time spent weeding through "this is a packet" introductory material to find the new stuff.

The presentation itself exists as a semi-interactive Flash video, which in my opinion has been designed very well. The outline is easy to follow and the narrative is natural and engaging (no small feat considering the material). 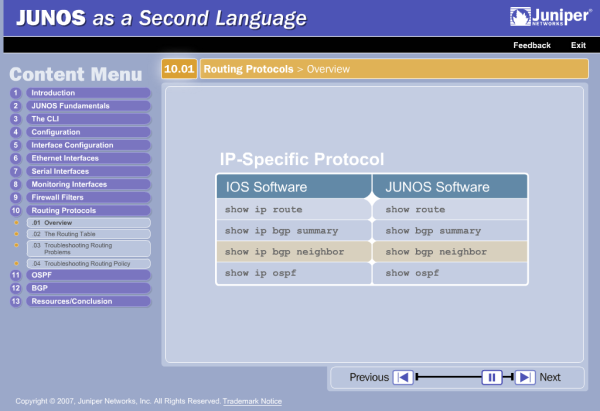 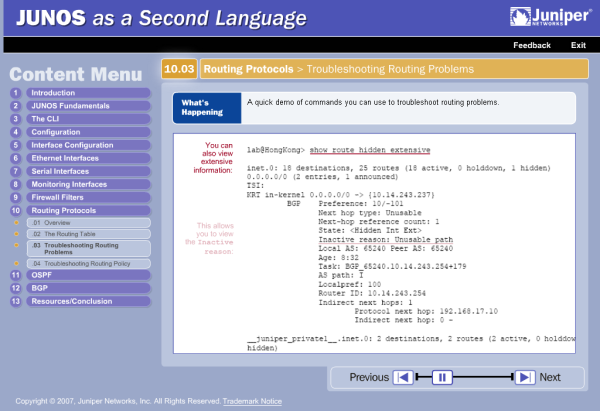 Even if you've never touched a piece of Juniper gear (as I haven't), I still recommend at least the first few sections of this training. If nothing else it provides some decent exposure to the JUNOS command line, and hey, it's free. It's also kind of funny to hear the subtle jabs at IOS now and then.

I went through this whole training program. At the end I was very impressed and got it touch with Juniper, we are now a mixed Juniper and Cisco shop, with most of our engineers starting to prefer working on the Juniper gear.

Very cool stuff, will definitely have a look. I keep meaning to set up Olive (an Olive?) at home...

Along the same vein, SonicWall offers free training (supposedly enough for their CSSA cert) through their site http://mysonicwall.com

Thanks! this was timely as I will be starting a new project next week on Juniper equipment.

I work for Juniper and (naturally) loved your comment. Would you be interested in discussing your experience with the Fast Track program? That's our official name for the training program that includes JUNOS as a Second Language.

Jeff, Sure. I can be reached at drkfiber [at] gmail.com

I read it a while ago..and I find it very usefull for begginers..Helped me alot with the Fast Track program.. Now i`m testing Junos with Olive.

barnabe: Its a simulator for Juniper OS as you use Packet Tracer or GNS3 for Cisco IOS simulations.