Do you use Dynamips?

In my last post on improving the state of Cisco certifications I suggested Cisco release "study" IOS images for the Dynamips router emulator. I've talked to a number of people with varying levels of experience with Dynamips and its enhancements, Dynagen and GNS3, but I'd like to get a better feel for just how prevalent they are in the community. I've included a poll here that will run for a week; please vote! If you have additional notes, feel free to leave them in the comments.

If you find yourself having no experience with these tools, I want to encourage you to check them out today. There are a number of tutorials on Dynamips and its hypervisor, Dynagen, available with a quick Google, like this one by Greg Anuzelli. You can even find a great batch of Dynamips video tutorials over on Blindhog.net. I recommend also installing GNS3, as it provides a very handy graphical interface for laying out virtual connections between devices. 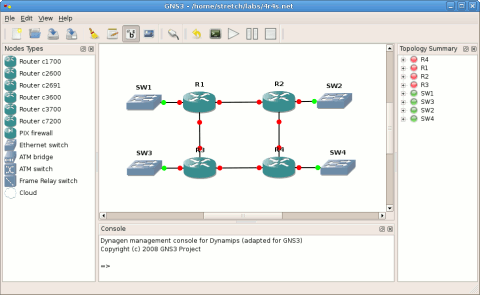 I've bought and sold an entire pod worth of equipment and this would have save me a lot of cash. I abandoned Dynamips because I couldn't get it to work but once GNS3 came along it was much easier to deal with. Having a triple core processor now doesn't hurt either though. I wish GNS3 had come along when I first started this whole get your CCIE deal.

My school, which uses Cisco Network Academy, just switched from Packet Tracer to GNS3 in their CCNA and CCNP courses.

I spend a good amount of time working with Cisco equipment as part of my job, so I don't use it all the time. I do occasionally when I want to do labs, and I don't think I would have passed the CCNP BSCI test without it.

This program is great!!

Thanks for the hint at GNS3 - I had tried dynagen under MacOS X without success, and will give it a shot - so far, I had to build my networks by hand, which can be quite cumbersome...

Yeah, I've heard about this IOS related stuff for a long time, it's great, and I provided Chris the SUP1A/MSFC1 for Cat65 testing last year. But for my personal, I never try it until several weeks ago. Because I had used to be familiar with another simulation solution which used by Cisco internal development. And now, I'm totally converted to Dynamips platform for my interOp tesing, it's really great in bridging with Olive - which is a simulation platform for JUNOS.

I have used it on the occasion, but prefer to use the real thing. Dynamips is good for teaching, but when it comes to labbing things for work, nothing beats a rack and the quick dynamics of it.

GNS3 has definitely made it much easier to use and the IdlePC enhancement has made it even better.

Dynamips/GNS3 is an excellent tool and makes the Bosom Simulator look like a joke.

It does have a minor learning curve, but it is getting better all the time.

GNS3 makes it so easy to use. Makes it simple (and cheap) to really learn about all things routing. Gives you real experience typing commands and getting links running that many people can not get in their current jobs. Great for learning for sure.

I use Dynamips and Dynagen all the time. I am not keen on GNS3 think it is bloated and not that good, I prefer to script my labs in Dynagen. However as much as these tools are great I still think you need experience on real hardware as well. Dynamips can be used as an additional learning tool but you are much not good on the job if you have never seen or used the real thing. Also Dynamips will never cover switching so you still hardware to do switching.

It seemed cool but it ran poorly on my 2GHz 512MB RAM Linux box. I was only able to get 2 2600's out of it before it pegged my CPU and hogged up a ton of memory. I ended up buying a handful of 2600's off ebay for a few hundred instead. I consider it an investment so I'm not too worried about paying a little bit up front. Also it doesn't do switching. Cool program but I prefer the real thing. For reference I'm working on the BSCI for my CCNP.

@Michael: That's probably a symptom of a missing or inaccurate IdlePC setting. With the right IdlePC value applied, CPU utilization for each emulated router should be negligible.

I've been using PT 5.0 side by side with GN3 for awhile now. Together they're both pretty cool. Either way you look at it's pretty cool to work on stuff in the virtual world. Especially if you don't have the moola to spend on the hardware.. :)

I use Dynamips all the time for my work scenarios. I'm not that great at writing configs without a device to work on and dynamips bridges that gap. It's good to be able to test a config quickly before jumping in and blaming somebody else for it not working. ;o)

I use it every day. Mock up labs for clients, test configs, CCNP study labs, Routers and PIX525 - it doesn't get much better...

holy responses batman! I use dynamips, I love dynamips. I dont use the GUI bits though, notepad and dos. Mock labs and CCNP study, and if you can get it on a solid state harddrive its pure bliss. Love dynamips.

With some research, imagination and some decent hardware, you can do just about anything with this. Ive had full "enterprise" level networks emulated. Bridge a few DC's in VMware, XP clients, VoIP softphones and the list keeps on going. I was amazed at how many other people in the Cisco industry waste so much time/money on simulators like Boson and Packettracer when you can pretty easily have the real thing.

I had a lot of issues initially with Idlepc but now everything works fine. I've also integrated GN3 with a checkpoint FW on virtual box as well as sdm and asdm all on the same laptop. I've sold all my existing routers and terminal servers which is brilliant