Most IPv4 routing protocols support some form of neighbor authentication, provided by either a plaintext password or MD5 HMAC. However, OSPFv3 (OSPF for IPv6) doesn't include any authentication capabilities of its own; instead, it relies entirely on IPsec to secure communications between neighbors. This is beneficial in simplifying the OSPFv3 protocol and standardizing its authentication mechanism.

Continuing from our OSPFv3 configuration lab, we can identify several points in the network where adding authentication would be prudent. In the real world, of course, it's considered best practice to implement authentication for all adjacencies, regardless of the apparent need. 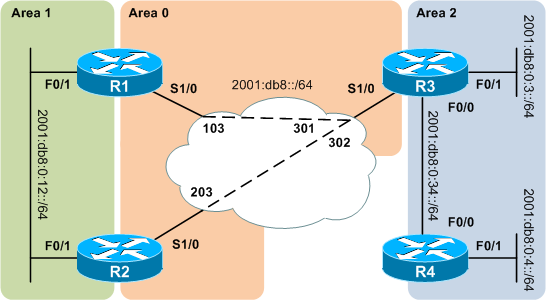 First, because end users may be present in the 2001:db8:0:12::/64 subnet connecting R1 and R2, adjacency authentication in this subnet is critical. Second, since a diligent network engineer never trusts his service provider, we'll also implement authentication across the frame relay network. The IPsec Authentication Header (AH) protocol will be used to preserve packet integrity. Unfortunately, IOS doesn't currently support IPsec payload encryption via Encapsulating Security Payload (ESP). ESP can be configured with null encryption, but this has the same affect as configuring AH. (For reference, the OSPFv3 IPsec configuration guide for IOS can be found here.)

Enabling Authentication on the Interface

The first parameter to specify is the Security Policy Index (SPI). The SPI functions similarly to key numbers in a key chain, but is communicated via AH and must match between both ends of the adjacency. The SPI number is arbitrary, but must be between 256 and 4,294,967,295 (the 32-bit ceiling). We'll use the SPI of 256 for our lab.

Next we must decide on the type of authentication and the key string to use. AH provides authentication via either MD5 or SHA1, with a string length of 128 or 160 bits, respectively. Since SHA1 is the stronger algorithm, we'll choose it, and specify a random bit string as our key. Note that the key lengths must be exact: 40 hex digits (or 32 for MD5). For reasons outlined in section 7 of RFC 4552, the same keying is used for the SA in each direction between two OSPFv3 neighbors; this is in contrast to normal IPsec implementations, in which each unidirectional SA is built from its own unique keying via IKE.

If you're feeling especially lazy, you can generate an SHA1 hash from random data with dd and sha1sum on a Linux or UNIX box:

After configuring authentication on FastEthernet0/1 at both routers, you may notice the OSPFv3 adjacency drop and reform. The OSPFv3 interface display verifies that SHA1 authentication is in use:

Incidentally, we can also verify the state of the IPsec AH security associations in use:

To see what the AH-secured OSPF packets look like on the wire, check out this packet capture. Look for the AH extension in the IPv6 header.

Enabling Authentication for the Area

Configuring authentication for an area follows the same logic as for an interface. First we enter OSFPv3 router configuration, then specify the authentication parameters for the area:

Again, the SPI is an arbitrary value, and the key string must be the appropriate length for whichever hashing method (MD5 or SHA1) is chosen. The above configuration enables IPsec authentication for all of R1's interfaces in area 0 (which in our case is just Serial1/0). We can use the show ipv6 ospf interface and show crypto ipsec sa commands as we did in the first section to verify OSPFv3 authentication is in use. The show crypto ipsec policy also provides a convenient overview of the authentication policies in use:

I tried this in my lab (simulated 72xx with IOS 15.1(4)M), but did not succeed. Neither authentication nor encryption does work. I tried it with interface-bound IPSEC-configuration, e.g.

debug output shows hellos going out, but no being received. As soon as I remove the encryption-command, everything works again.

Any clues?
Thanks,
airflow

I have the same issue as Airflow using the same IOS version on a 7206 in GNS3. I cannot seem to find a resolution either. All I see online related to this are users disabling the hardware on the router using "no crypto engine onboard 0" command and then "clear crypto sa" to fix it.

Excellent breakdown of the implementation of authentication for v6 OSPF deployment. Thank you for sharing.