First hop redundancy protocols including HSRP, VRRP, and GLBP can be used to emulate a virtual router on a subnet, typically hosts' default gateway. However, if adequate authentication is not enabled, a malicious user can claim a higher priority and become the active router, which positions him to create a denial of service (DoS) or man in the middle (MITM) attack. All three protocols mentioned posess this vulnerability, but the following example demonstrates exploitation only of HSRP. 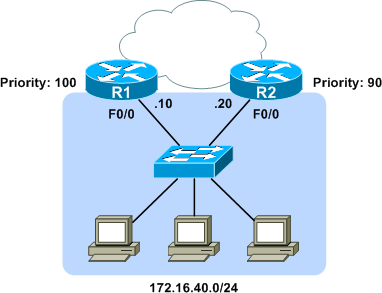 Both routers have an HSRP group configured on their FastEthernet0/0 interface. R2 is configured as the standby router with a priority of 90 (R1 has the default priority of 100).

We can verify that R1 is the active HSRP router using the show standby command:

Both routers exchange HSRP hello packets at the default interval of three seconds. Because these packets are multicast to 224.0.0.2 (the "all routers" IPv4 multicast address), they are flooded to all hosts in the broadcast domain. This means any host with layer two connectivity can intercept and inspect the HSRP parameters. An HSRP packet from R1 in our topology looks like this:

This single HSRP packet provides all the information necessary for an attacker to hijack the HSRP group and become the active router. 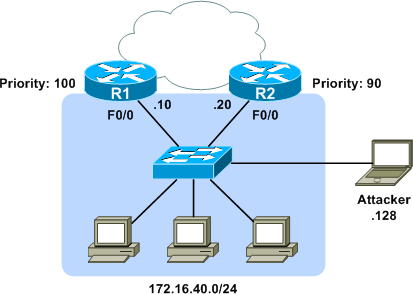 To usurp the active router, we need only to inject HSRP hellos claiming the active role with a higher priority. Fields of interest from the intercepted packet above are:

All other fields should match between our captured packet and the one we inject.

A number of tools are available to emulate an HSRP router, but for this example we'll use the Scapy packet manipulation framework. Scapy provides a very convenient interface for constructing, transmitting, and capturing packets. We can make use of its prebuilt libraries to easily construct a forged HSRP packet. Each protocol layer is built from an independent Python object:

We only need to specify the important values; Scapy is smart enough to fill in things like the UDP port number and packet length on transmission. Because our intercepted packet indicated a hello time of three seconds, we'll need to retransmit our forged packet at the same interval (inter=3) indefinitely (loop=1):

With this command, Scapy begins repeatedly transmitting the packet we built onto the wire every three seconds. Aside from the source IP address and increased HSRP priority, our injected packets are virtually identical to the ones coming from R1 (including the default authentication string of "cisco"). When R1 begins receiving our forged hellos, we see it transition state from active to speak, then from speak to standby:

Similarly, R2 has transitioned from standby to listen, as it has the least of the three priorities in play, and there can only be one active and one standby router.

The output of show standby on R1 verifies we have become the active router:

At this point, we have achieved an eventual denial of service attack, as neither router will answer ARP requests for 172.16.40.1 so long as we are seen as the active router. Although our example ends here, we could opt to begin answering ARP requests for 172.16.40.1 with our own MAC. By capturing the traffic from other hosts on the LAN and forwarding it on to one of the legitimate routers, we could easily achieve a man-in-the-middle attack.

While an attacker can still intercept and interpret these packets, he can't inject an altered copy without knowing the key string used to create the MD5 hash. If we try our attack again, this time both routers simply log an HSRP authentication failure:

Interesting stuff and nice to see output from an actual example of it working (Or not in the case of Authenticated HSRP).

Although an MD5 hashed authentication is agood first line of defense, it is always possible to assume the role of default or active gateway in a Layer2 network.

Therefor always run some form of ARPwatching mechanism on your switches (e.g. Ciscos' Dynamic Arp Inspection and Sourceguard) to protect yourself against all kinds of L2 attacks.

nice one stretch - keep it up. thanks.

Thanks for your article, just a question however. I make a test with 2 routers under GNS3. One of my router use authentication and the other one no auth.

So are you really sure that authentication prevent from rogue gateway ?

I don't have anything beneficial to add to this post. But I did want to say that this site is awesome! The detail and information posted is great! Keep it up please :)

Since neither router knows of the other they'll both assume the role of active. Did you see duplicate IP address error messages in the logs of each router?

Stretch, very nice. I deal with HSRP at work all the time and it's good to see a reason to push for authentication along with examples of how easy it would be to cause problems.

Awesome, very interesting as usual. Keep the good work up and I will learn and understand even more. Your are a star.

You can achieve the same result using Yersinia. If you are interested in other L2 attacks give it a try. Anyway your post is pretty useful and clear.

Hi All, nice stuff . In the config , non of the routers are using the preempt option , is the rogue hsrp router will still take precedence even though both genuine hsrp routers are still up ?

if you knew the SVI that this HSRP setup is used for couldn't it be used for a man in the middle attack??

I have been aware of this for a while, but your illustration is very clear and succinct. I still cannot seem to find any references to a standardized vulnerability, ala CVE, OSVDB, Bugtraq, etc. Anybody know of one?

Please help me understand how MD5 auth is secure. I must be missing something. This is how I think it works: The MD5sum of "MyPassword" is "1232369feab3a3cc2e1c2d2a31b2a17e". So router A sends the hash to router B. Now router B does a MD5sum on "MyPassword" and comes up with the same hash. Therefore you are authenticated. Now if you can see that hash with Wireshark, why can't you just create a packet with that hash in it, the same way you did with the clear text password? I know I have something wrong and it is driving me crazy.

EDIT: Could it be that I am correct, and sending a hash is just a way to protect your passwords?

@rubberneck: The MD5 checksum is generated from a concatenation of the shared secret and certain dynamic header fields so that it constantly changes. An attacker can't just replay a hash sniffed from the network; he would need to generate a correct hash for the packet he wants to send, for which he needs to know the cleartext shared secret. Hope that helps.

Thanks Stretch, of course it seems obvious to me now that I know. The site is awesome.

Nice writeup. I'm a huge fan. I wanted to bounce something off of you. Do you happen to know which fields in the HSRP datagram are hashed with MD5, and how the keystring is applied (prepended, appended, XOR'd)? This seems to be an often misunderstood security mechanism.

Thank you again for your commitment to teaching others.

Do you know if there is a way to filter HSRP packets from reaching the end users interfaces? I tried to apply a acl matching the HSRP packet but it did not work, any other way to fiolter it?

before all thank you for this awesome post! Anyway I'd like to better understand the relation between HSRP and the impact of a potential attack like this when port security is enabled.
Cisco states: "When port security is configured on the switch ports that are connected to the HSRP enabled routers, it causes a MAC violation, since you cannot have the same secure MAC address on more than one interface...workaround: 1) disable port security 2) Issue the standby use-bia command on the routers" - from http://www.cisco.com/en/US/tech/tk648/tk362/technologies_tech_note09186a0080094afd.shtml

Q1: Do we need to assume that this attack works only if port security has been disabled on the switch ports that are connected to the HSRP enabled routers?

Cisco states again: "When a router becomes active, the virtual IP address is moved to a different MAC address. The newly active router sends a gratuitous ARP response, but not all host implementations handle the gratuitous ARP correctly." - http://www.cisco.com/en/US/tech/tk648/tk362/technologies_tech_note09186a0080094a91.shtml#multihsrp

Q2: So, does an attacker pretending to be the new active router need to "manually" issue an gratuitous ARP to "update" the MAC address of the virtual IP?

useful things are given by a geek!!! thanks

The best way to block HSRP attack is as below:

Configure on R2 also accordingly. This will block any traffic on HSRP port 1985 from any ip except the R1&R2 ips.

Strech - thank you very much for your efforts. This article helped me to understand HSRP even better, and understand the security threats that needs to be take in consideration.

What happens when both routers are in Active state. Both the router would become eligible to recive packets.

How will the underneath switch behave in this case ? To whom will it send packet to ?

Thanks . Good one to read and understand the risks. I agreed with Vineesh to restrict the hsrp traffic by accesslist

Have noticed the same issue when the current Active router is setup with Authentication that the Standby router is not configured with. %HSRP-4-BADAUTH: Bad authentication packet is received... however both routers then respond to ping echos sent to the virtual router. Strange. My assumption is that the current Active router will continue to forward packets bound to the virtual router IP, and the Standby router would not be considered part of that HSRP Group (because it fails to authenticate - and hence should be kicked out of the group, or atleast not forward on behalf of the virtual router anymore!? is my logic broken?)

Vineesh - your ACL should specify UDP as the protocol. HSRP uses UDP at transport layer.