There are two major classes of routing protocol: distance vector and link-state. It's easy to remember which protocols belong to either class, but comprehending the differences between the two classes takes a bit more effort.

Distance vector routing is so named because it involves two factors: the distance, or metric, of a destination, and the vector, or direction to take to get there. Routing information is only exchanged between directly connected neighbors. This means a router knows from which neighbor a route was learned, but it does not know where that neighbor learned the route; a router can't see beyond its own neighbors. This aspect of distance vector routing is sometimes referred to as "routing by rumor." Measures like split horizon and poison reverse are employed to avoid routing loops.

Link-state routing, in contrast, requires that all routers know about the paths reachable by all other routers in the network. Link-state information is flooded throughout the link-state domain (an area in OSPF or IS-IS) to ensure all routers posses a synchronized copy of the area's link-state database. From this common database, each router constructs its own relative shortest-path tree, with itself as the root, for all known routes. 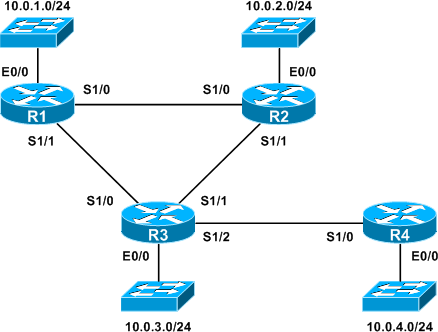 Both distance vector and link-state routing protocols are suitable for deployment on this network, but each will go about propagating routes in a different manner.

If we were to run a distance vector routing protocol like RIP or EIGRP on this topology, here's how R1 would see the network, assuming each link has a metric of 1 (locally connected routes have been omitted): 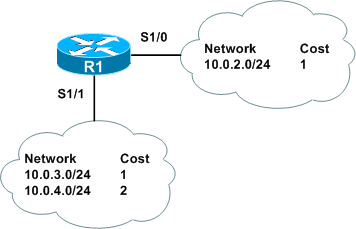 Notice that although R1 has connectivity to all subnets, it has no knowledge of the network's structure beyond its own links. R4 has even less insight:

Because they do not require routers to maintain the state of all links in the network, distance vector protocols typically consume less overhead at the expense of limited visibility. Because routers have only a limited view of the network, tools like split horizon and poision reverse are needed to prevent routing loops.

Now, let's look at the same topology running a link-state routing protocol (in a single area). Because each router records the state of all links in the area, each router can construct a shortest-path tree from itself to all known destinations. Here's what R1's tree would look like: 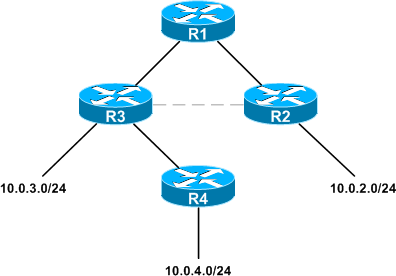 R4 has constructed its own shortest-path tree, different from that of R1: 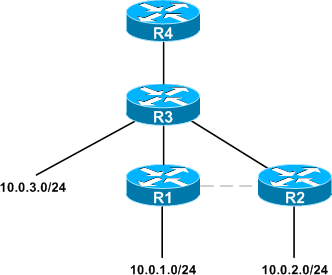 Although maintaining link-state information for the entire area typically requires more overhead than does processing advertisements only from direct neighbors, but provide more robust operation and scalability.

I remember when we had to count out excersises using Dijkstra-algorithm at college years ago. On a piece of paper..another useless thing I tought, and just realized OSPF uses the same math to build the shortest-path tree.

It's funny how even some link-state protocols still act like link-state in certain scenarios.

Nice information. Thanks. I like to add one more point. If a network is huge its better to use link state than distance vector,because there are more limitations in distance vector like Hop count limit etc

A 'vector' has both direction and distance already. So then why did they call it 'distance vector'? Those crazy network guys..

Thank you!
This helped a lot, better than my teachers pdf´s, and all he had to do was translate the cisco notes.

never came across a definitive explanation untill now! More grease to your elbow... Thanks!

Nice information. Thanks. I like to add one more point. If a network is huge its better to use link state than distance vector,because there are more limitations in distance vector like Hop count limit etc"

The intuition seems appropriate at first glance but further investigation reveals that large networks are best supported using DV-centric approach instead of LS. Imagine a large network with 1000's of routers having to keep track of all the others.

Hence, it is clear why the networks of network - the Internet - adopts a path-vector approach in its usage of BGP.

Clear and absorbed thanks for the day.

Good Explanation dude, brief and easy to understand!! Nice one!!

After seeing this difference. I think that its better to use Distance vector Routing for large networks. Because If a router uses Distance vector algo.. the router will come to know only the details of neighbouring router. But If a router uses Link state Routing then each router will find is own shortest path. I Think this not good for larger networks like (1000 routers).

This is my assumption. Any other guys you can clarify on this and please let me know, am I right?

@those of you speaking of DV vs LS for large networks, don't forget about AREAS. In OSPF the link states are only known within an area, outside of that OSPF acts like a DV protocol. Therefore, LS protocols are fine for large networks if designed properly.

The information provided is really superb !

Its simple and easy to understand. It really help me a lot.

Its help me to understand the real difference,Thankyou!

nice article...clear and simple ...thanks....even i enjoyed the comments as well ...very logical people they are ..specially one who said vector already have distance and direction...for him i need to say..vector has magnitude and direction not magnitude always must not be distance....i think so.....for that reason protocol is named distance vector routing protocol...

Thank you, Jeremy! You made it real simple for me.. :D

"R4 has constructed its own shortest-path tree, different from that of R1:"
The shortest path doesn't necessarily mean the fastest path.
It could be quicker to go (R4->R3->R2->R1), but we don't know that because there are no costs associated with link state.

I am going to come up with a Link State Distance Vector Protocol (LSDVP). (You heard it here first) Why not provide the best of both protocols? To optimize the route, it might not take the shortest path. All you would have to do is provide a distance vector along (Router path cost) with the link state protocol. Done.

I think vector actually refers to the arrays or table that DUAL uses when calculating possible paths to a destination.

Awesome explanation. Really good for people just learning this stuff. I wonder if the military would use Distance Vector....seems like too many router for Link State, but I am just learning so I can be wrong.

Thank you Jeremy, very easy and nice explanation. Much better than cisco books.

Thank you for very short and clear explanation

Thanks for the explanation!!!

Scary how easy to understand this explanation was for me. Definitely helped me study for my CCENT exam.

very good i understand it now

Big interview.. brain going in t melt down.. cant remember simple concepts from years back.. thanks for making this short and clear.

Minor nit: I believe it's called "distance vector" because the magnitude may be measured in several dimensions, not just a scalar hop-count which RIP uses.