In multicast forwarding, each packet in a stream is transmitted once by a source and replicated by the infrastructure to efficiently reach an arbitrary number of recipients. This introduces a number of challenges not typically of concern when dealing with strictly unicast traffic. The fundamental difference is that, while unicast routing protocols are designed to forward traffic down the optimal path or paths to a destination, a multicast routing protocol must forward traffic down all paths, often replicating packets out multiple interfaces on the same router. 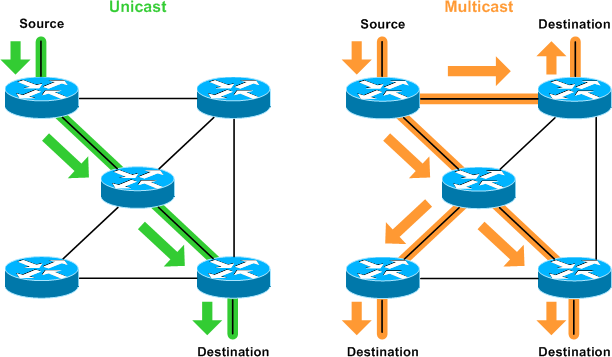 Reverse Path Forwarding (RPF) checks are performed on each multicast packet received by a PIM router. RPF verifies that incoming multicast packets arrive on the interface closest to their source, by comparing the source address with the unicast routing table. If a unicast packet destined for that address would be forwarded out a different interface, the packet has reached the router via a non-optimal path, indicating the presence of a potential routing loop. In this event, the RPF check fails, and the incoming multicast packet is discarded.

In actuality, PIM refers to a family of very similar routing protocols, but which each operate in a different mode. These are:

In dense mode operation, routers initially flood multicast traffic for all groups out all multicast-enabled interfaces. Routers which determine they have no clients interested in receiving the traffic then send prune messages up toward the source, requesting that the flow of multicast traffic downstream be stemmed. This process repeats toward the source router until all extraneous branches have been stemmed. 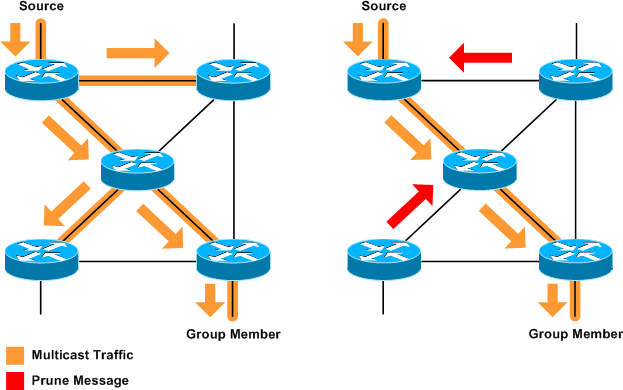 This process of flooding and pruning repeats every three minutes. Because of this and other inefficiencies, PIM-DM isn't often recommended for real-world deployment. 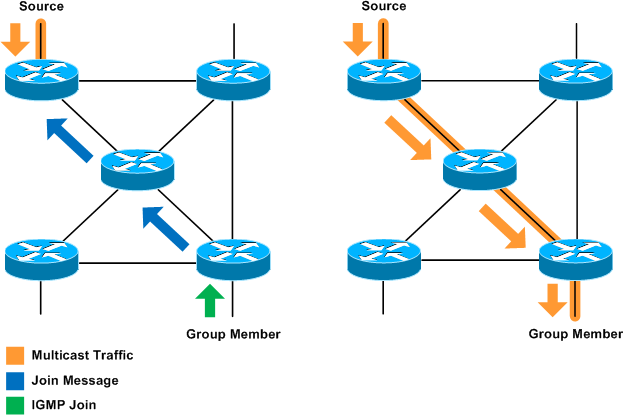 Bidirectional PIM is an extension of PIM-SM, where multicast traffic can flow in both directions. All sources are potentially receivers as well. 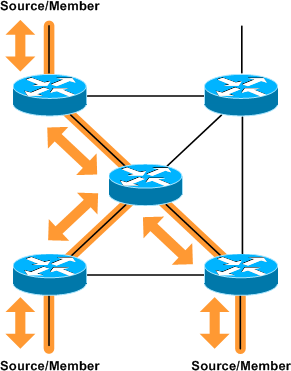 The first two steps are accomplished with single commands in global configuration on all routers in the multicast domain:

Note that there exist other means of configuring RP routers, namely Cisco's proprietary Auto-RP and PIMv2's Bootstrap Router (BSR) methods. In our example, only manual configuration is used.

PIM is enabled per interface:

Believe it or not, this is all the configuration necessary to get a bare bones multicast network up and running. After enabling PIM, routers will form adjacencies with other PIM routers and multicast routes will be exchanged:

Of course, this article just scratches the surface of PIM operation and configuration. More to come.

Great as usual, where do you get all this from?

Nice and clear. And although the pictures are not compulsory they really help in remembering easier the differences between all these concepts - I appreciate the time you spent making them. I'll be watching for the "more to come" ;)

One suggestion is that whenever you post such articles also place a copy in pdf format of the same for downloads..

So on the static RP mapping make sure to add override to the end.

Can you explain/clarify how you pick which router to be the RP?

also you note that multicast will learn from the unicst forwarding table. is it protocol dependent? ie eigrp but not ripv1 or bgp but not ospf?? does that matter?

@Abou: The RPs are typically routers centrally located in the network. Rest assured I plan to cover PIM-SM and RPs in much greater detail in future posts.

Simply Awesome. Right when i needed it. I was fiddling with an Anycast issue yesterday for a client. I don't have good exposure to multicast. Would appreciate a brief overview on anycast....cheers mate...

All I can say is really appreciate and damn good hoping to c more from u ......

I understand that an initial flood is needed. What I don't understand is why does it repeat it every 3 minutes. Can someone explain? Thanks

With later release of IOS PIM-DM has a new optimisation called state-refresh which is enabled by default. This is designed to prevent the flood of multicast every 3 minutes. State-refresh works by sending a control message down the source based tree which resets the prune state in the outgoing interface list. This means that routers who do not have any receivers for a particular group do not have to wait for the flood and prune.