A typical approach to network perimeter security is to allow outbound traffic not explicitly denied, and to deny inbound traffic unless it is explicitly allowed. Although simple in concept, this approach requires significant considerations regarding the return path of internally initiated sessions. Consider the following scenario:

Clients resides on the secure 192.168.0.0/24 subnet, which is connected to the Internet by R1. We can place both inbound and outbound access lists on R1's F0/1 interface to restrict communication between our internal network and the Internet.

For the sake of an example, let's assume we want to allow web traffic from the client to web servers on the Internet. We can leave outbound traffic (from client to server) unrestricted by simply not including an ACL, but how would we restrict return traffic from the Internet? Obviously we can't simply deny all traffic, or nothing would work. Nor can we allow all traffic, as it would leave the secure subnet exposed.

We also can't simply allow all TCP traffic with a source port of 80, as an attacker could easily send malicious traffic using 80 as his source port. And we can't restrict inbound traffic to certain source IP addresses, as we'd have to create a new entry for every server we want to access on the Internet. We could allow inbound traffic to the client's source port, but this is typically a randomly-chosen high port number which can't be practically matched with static configuration. But what if we could record and match each source address/port pair automatically?

Any packet matched by Egress will be reflected into our reflexive ACL, named Mirror. Since Egress matches all IP traffic, we reflect entries for TCP, UDP, and ICMP. If we wanted, we could have specified only TCP, for example, to only match TCP traffic. While TCP sessions are relatively simple to track, IOS can also roughly track UDP and ICMP "sessions," even though these aren't true session-oriented protocols. 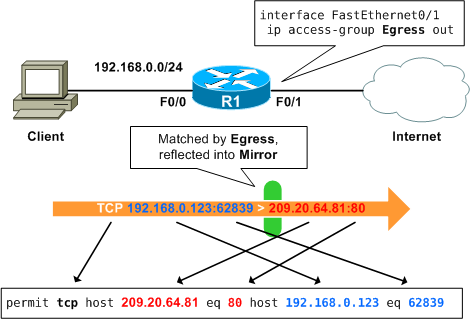 Now when a client in 192.168.0.0/24 initiates a TCP session to a server on the Internet we can see a reflected entry is created in Mirror:

Now, to put our reflexive ACL into action! We'll create an inbound ACL named Ingress to evaluate Mirror, and apply it inbound to FastEthernet0/1: 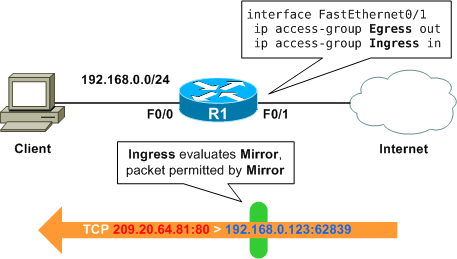 Now packets inbound on FastEthernet0/1 are only allowed in if they are permitted by Ingress, which is essentially just a reference to Mirror. Note, however, that we are free to add normal entries to Ingress both before and after the evaluate statement if we want. With all three components in place, we can see the static outbound entries (Egress), the static inbound entries (Ingress), and the dynamic inbound entries (Mirror):

One last item to note is the expiration timer on the Mirror entry. This timer is reset to 300 seconds with each new packet that would cause the reflection. If no new traffic has been seen before the timer expires, the entry is erased. Additionally, when the router detects a session has been closed (for example, using the FIN flag in TCP), the timer is immediately reduced and the entry is removed shortly thereafter.

But consider that router generated traffic is not reflected and therefore return traffic will be blocked by the ingress ACL. Important when using routing protocols on the same link!

Please tell me, is CBAC (for simple L4 and L3 protocols, ie. TCP, UDP, ICMP...) using the same mechanism as reflexive access-lists. Works pretty much the same, doesn't it?

Two questions though: one is the same as Praetor's, the other is related to NAT. In your example you are NAT overloading from 192.168.0.0/24 to your WAN IP, so wouldn't this ACL for this particular scenario be overkill? Doesn't NAT overload do this same process by default? Are there any benefits to applying this to a NATed interface? Thanks.

Awesome explanation..Yeah i agree with Praetor...does CBAC work the same way... if yes where can one find the logs or the "reflexive access-list" created by CBAC?

Nice, can see some use for it rather than using CBAC, CBAC limited, you could have a requirement to open a particular protocol not covered by CBAC, ALSO CBAC inspection chew up the processor by adding in alot of inspections

CBAC is more robust, as it can monitor applications that utilize multiple ports when establishing a session, like FTP.

I prefer CBAC when possible, but not all ios images have the CBAC features. CBAC looks as the communication in much more detail. However, I have seen a couple of occasions that inspecting TCP absolutely killed performance for an application.

hm, can somebody explain me why this feature is only usable with named ACLs ?

Just Amazing, everyday there is something new on your blog to learn. Thanks a lot

Amazing explanation. its much easier to understand than cisco website.

thank you very much

Dude, how can I send you a coin ?, of course you deserve more than that. You always save me time when I look for explanations.

Question: Reflexive access list, Is there any other way to explain it more easily than this article do ?.

Great post, and especially good where CBAC won't work due to IOS constraints, e.g. 2651XM with 12.3T IOS that only has 32MB flash. Can't upgrade to 12.4T or later due to flash size. 12.3T version has a bug that causes most inspected traffic to get dropped.

Reflexive ACL works the same way as CBAC for the most part, and doesn't suffer from the inspection bug.

Thumb up for the post (the technical details), but the challenge required in order to post comments was the funniest and inspired surprise of this page. Very nice.