I've always considered this common knowledge, but lately I've run into a number of people who weren't aware of it, so I decided to mention it here: the length of bulk cable is printed on the cable jacket. If you inspect the jacket of a twisted-pair cable, you'll find printing like this every few feet for the length of the cable (pic stolen from Donutey.com):

Network cable is manufactured in extremely long lengths, then cut and packaged into spools or boxes (typically in 1000ft lengths). At the end of each iteration of the jacket printing you'll find the length of the cable relative to the start of the original cable marked in feet or meters, depending on the country of production. This can be a very high number; one I just pulled out of a drawer is marked at 41636 meters.

This is handy, as you can read the lengths closest to either end of a cable, subtract the lesser value from the greater value, and arrive at an approximate cable length. For example, if a cable is marked 46782 ft. at one end and 46908 ft. at the other end, 46,908 - 46,782 = 126, so we know the cable is about 126 ft. long (allow for a few extra feet to account for the difference between the cable's nearest marking and where it was actually cut). Very convenient when you don't have a TDR handy.

Expanding this concept a step further, it's also a good idea to keep track of the length of cable remaining in a box. Experienced installers can judge roughly from the weight of a box whether it contains enough cable for the run they need, but an exact remaining length is always preferable. It works like this: every new box contains 1000 ft. of cable. When you use a length, measure it using the method described above (adding maybe 5 ft. or so to stay conservative), and write that number on the box. The next time you cut a length from the box, cross out the existing number on the box, subtract the length of the piece you just cut, and write the new number on the box below the old one. Some boxes even have a designated chart for this: 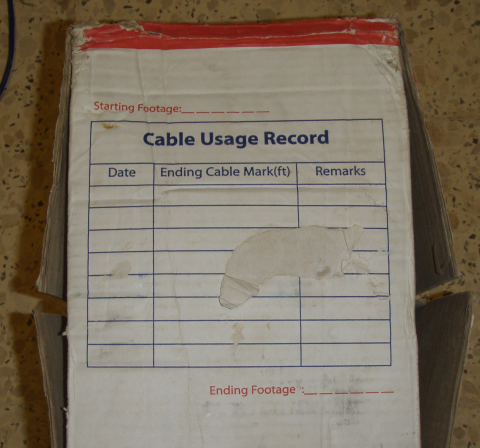 By doing this, you'll always have a fairly accurate (to within a few feet) measure of the amount of cable left in a box. It only takes a minute, and allows for much more efficient usage of cabling. For example, if you estimate you'll need about 150 ft. of cable for a run, you can safely use a box marked with 185 ft. rather than a grabbing a brand new box. Of course, the trick is to ensure that everyone who pulls cable from a box understands and remembers this process. Also note that not only twisted-pair cabling is marked with length; this process applies to coaxial and other cable types as well.

Good job, like you I assumed everyone knew about the numbers on the cable.

one I just pulled out of a drawer is marked at 41636 meters.

I suppose that should be 'feet'?

@Jeroen: Nope, meters. Like I said, this can be a very high number.

Nice one,i have been working with this cables for quite some time now.But somehow never noticed this.

This will give you the approximate length, give or take 4 metres of the cable.

This command works only on none SFP UTP ports on a switch (such as the 3750).

It further shows the cable pairings and whether there is a lose of connectivity and at what length, obviously is you have fixed cabling with as patch lead either side and it says at 56m pair 4 is broken, chances are you have a dodgy patch lead at the remote end etc.

This has saved me loads of grief!