STP is vital for detecting loops within a switched network. Spanning tree works by designating a common reference point (the root bridge) and systematically building a loop-free tree from the root to all other bridges. All redundant paths remain blocked unless a designated link fails. The following criteria are used by each spanning tree node to select a path to the root bridge:

We can manually configure the priority of a switch and its individual interfaces to influence path selection. The values given below are defaults.

So where do these configured STP priorities come into play? There is no BPDU field for priority; instead, both bridge and port IDs have their administratively configured priorities embedded in them. Note the Bridge Identifier and Port Identifier fields in this Wireshark capture of a PVST+ BPDU: 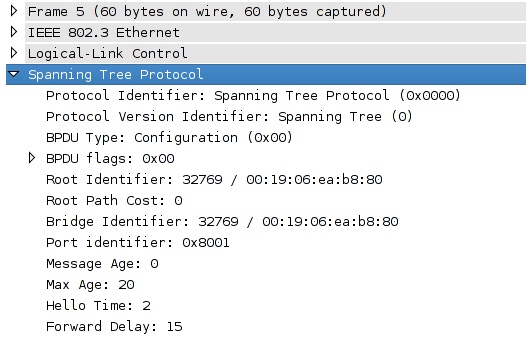 Although the bridge ID field has been conveniently split into a bridge priority and MAC address for us by Wireshark's protocol descriptor, it is actually a single eight-byte value. The following field, which contains the port ID unique to each interface, is similarly composed at one-fourth the size.

Because this switch is running PVST+, the VLAN ID (1) is added to the configured bridge priority of 32768 (the default priority) for a sum of 32769. The unique bridge ID, taken from a MAC address, is appended to this value to form the complete bridge ID. Similarly, the port ID is formed by prepending the 4-bit port priority (the default value of 128, or 0x80) to the interface ID, which happens to be 0x001 because we are connected to the first physical switchport. These two values form the complete port ID of 0x8001.

"Similarly, the port ID is formed by prepending the 4-bit port priority (the default value of 128, or 0x80)"

@spanner: The priorities are offset by four bits, with the other four bits of the first byte dedicated to the interface ID, which is why you can only assign priorities which are evenly divisible by 16.

You are right. Mentioning offset would make the article more clarifying. Also interpretation of the port priority field is standard version dependent. I guess it is 4+12 bits for PVST+ and 802.1D-2004. Though it was 8+8 bits for the legacy STP in 802.1D-1998.

@achilles: That appears to be a very outdated document (CatOS). The default port priority on modern Catalyst switches is 128.

"Someone recently complained to me that bridges couldn't have more than 256 ports because of the spanning-tree algorithm... I checked out the 802 standard. It says that the 2-byte priority port ID should be divided into two portions: the top byte should be "priority," and the bottom byte should uniquely specify the port. This would allow only 256 ports..." Radia Perlman

I couldn't find anything on RFC 3418 either. It's possible that's not the one to read. The funny thing about all this is the bridge priority of 32768, I just except blindly.

Jeremy, thanks! Really good!
I have also just finished on a new article regarding bridge id, priorities, etc.
http://blogbt.net/index.php/2014/02/stp-determining-setting-root-bridge/

Hi guys... Not sure if this is the right place to post this, but I've been reading about STP tiebreakers and I have a little question:

As far as I know, STP tiebreakers for electing the root ports are:

BID (Electing the root bridge) Lower Path Cost (Selecting the best route to the root brige Lower BID (If two or more paths have the same cost to the root brige) Lower Recieved Port-Priority (This only happens if I a switch have multiple links connected to the same neighboor switch) Lower Local Port-Priority (This only happens if a switch have multiple ports connected to the same port of a neighboor switch. I think using a hub, for example) I've made some test and tiebreakers work fine. But I've also noticed that this tiebreakers apply for electing root ports, and not when electing designated ports.

Let's say that I have a root switch (Switch A) connected to (Switch B). Switch A have two ports connected to the same segment ( Port 1 and 2 through a hub). Switch B have one port to that segment (Port 1). Obviosly, switch B is going to elect that port as the root port, but Switch A have to choose one designated port and it also have to block the the other one.

When I did my test, port 1 was elected as the designated port, ignoring rule number 4 and going directly to rule number 5.

So, when electing designated ports, does the tiebreak rules apply?

I'm sorry if this post is too long or if it is in the wrong place, but this seems a good place to ask because I found really good information on this site.

So we See Different Bridge ID for every Vlan..... While we normally say we had one bridge ID (when we apply show spanning tree protocol command) for One Switch

@maybeeccie: Per Vlan Spanning Tree will run an instance of STP for each Vlan.

I do have a question for you why we always say that many switches are capable of Rapid Spanning Tree Protocol (IEEE 802.1w) but you did not mentioned why few network administrator enable that what is the reason behind that?