I first heard about counterfeit Cisco hardware being produced a while back and didn't think much of it at the time. However, it seems to be a growing problem according to some recent articles. Apparently the FBI has become concerned with the amount of counterfeit Cisco gear entering the market, primarily originating from China (how surprising).

A purported FBI briefing (unclassified) has been posted at abovetopsecret.com, and while it appears legitimate, no one seems to be able to say for sure. For anyone really interested, you might be able to obtain a copy with a FOIA request.

The obvious motive driving counterfeiters is to generate a profit, but considering the majority (if not all) of this gear has been traced back to China, one has to consider the possibility of state-sponsored hardware-assisted espionage. Call it a conspiracy theory, but China has already made it quite clear they'd like to infiltrate the networks of the West, engaging in various attacks on various US and European government agencies and commercial entities.

Politics aside, counterfeit equipment poses a real threat to the integrity of our networks, and is definitely something to watch out for. Andover Consulting Group has a great guide for spotting counterfeit gear. 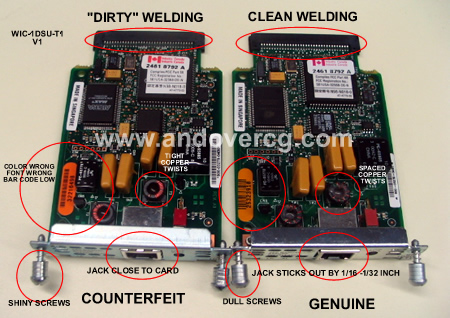 Bottom line: buy from a reputable reseller, and inspect all hardware before installing it. If any readers have encountered fake Cisco gear in person, pics would be much appreciated.

UPDATE: IEEE Spectrum has a great article on the rising concern over malicious hardware manipulation. A relevant quote from page two:

Holman sketches a possible scenario: suppose those added transistors find their way into a networking chip used in the routers connecting the computers in your home, your workplace, banks, and military bases with the Internet. The chip functions perfectly until it receives that 512-bit sequence, which could be transmitted from anywhere in the world. The sequence prompts the router to hang up. Thinking it was the usual kind of bug, tech support would reset the router, but on restart the chip would again immediately hang up, preventing the router from connecting to the outside world. Meanwhile, the same thing would be happening to similarly configured routers the world over.

I have had about 10 T1 WIC cards that were counterfeit off the gray market. They were trashed after finding out when we sent them to another used gear company. That was just in the last 14 months...