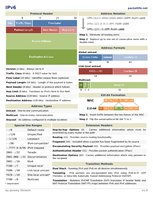 New cheat sheet on IPv6 uploaded today. Preparing this sheet helped me become much more comfortable with IPv6, both as a protocol and as an addressing concept. The information was sourced from a number of texts, including the Cisco Press CCNP BSCI exam guide, Routing TCP/IP vol 1, 2nd ed, and a number of RFCs.

It's odd that, despite having been around for more than a decade, IPv6 has undergone a number of alterations from its original specification. Probably the most obvious example is that of site-local address space (FEC0::/10), which has recently (2004) been deprecated in favor of unique local addresses (FC00::/7). There have also been many IPv4-to-IPv6 adaptation mechanisms proposed, with varying levels of popularity.

If you haven't begun yet, I heavily suggest studying up on IPv6. It's a very intriguing protocol; its larger address space is probably the least interesting benefit offered. It's also on its way to your network.

Already printed, looking good! Maybe you should note, that the 64 bit Interface ID in the address is the EUI-64 defined below? Another tip could be, that the 2000/3 scope covers all IPv6 addresses assigned. That's nice to know for firewalls.

Whoops! You are indeed correct. I've uploaded a revised edition of the IPv6 cheat sheet (v1.1) with the EUI-64 section corrected. Nice catch!