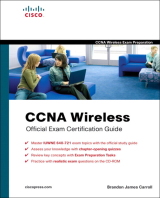 For this exam, Cisco Press released the CCNA Wireless Official Exam Certification Guide in October. If you keep up with Cisco blogs you'll immediately recognize its author Brandon Carroll as the man behind globalconfig.net.

The exam guide is broken into short, easily digested chapters, which is especially beneficial given the scope of wireless technologies. In traditional Cisco Press style, each chapter is encapsulated with a pre-chapter quiz and a post-chapter review. Despite the relatively short length of each, most chapters have a generous reserve of quiz questions (289 in total). The final chapter provides some brief recommendations for exam preparation, which likely won't be new concepts to someone who has passed the CCNA but still warrant a refresher.

The first part of the book covers the low-level wireless technologies including some introductory radio theory and an overview of the different wireless standards and protocols in use. I've always wanted to dig more into radio theory; unfortunately it remains mostly outside the scope of this exam and data networking in general. The remaining parts cover the Cisco spin on things, from client software to wireless controller configuration.

There are a few minor issues symptomatic of a rush to press, such as acronyms being used before they have been expanded and the occasional errata, but these are tolerable. It is also important at times to carefully follow the illustration numbers; the text sometimes gets ahead of the graphics as there are so many. Chapters 5 and 10 in particular have some great photos of the gear discussed.

Probably the biggest issue I encountered with the book is through no fault of the book itself: much of the CCNA Wireless covers web-based graphical administration interfaces on the access points and controllers, and it's not easy to teach graphical interfaces through static print. For this reason, I'm not sure I'd recommend the CCNA Wireless exam to someone who doesn't have access to an actual controller and a few APs to experiment with. However, if you've decided to take the exam, this guide has got you covered.

With any luck Cisco should now drop the wireless section in CCNP BCMSN as that was a complete waste of time IMHO?

A couple of documents I would supplement the book with include the include the WLC config guide and the WCS config guide. Finding a controller or WCS server to play with will definitely help.

@Glenn - I doubt it. Wireless is everywhere. However, Cisco did just release the blueprint for the CCIE Wireless, so maybe a CCWP is down the road somewhere.

also a fresh one, but for CCNA Voice (640-460): [CCNA Voice Official Exam Certification Guide] (http://www.ciscopress.com/bookstore/product.asp?isbn=1587202077) by Jeremy Cioara over ciscoblog.com

"coming soon" for Professional series wireless... I would expect it second half of 09...