As you're probably aware, the IP header includes a time-to-live (TTL) field which serves as a hop counter. At every routed hop, the TTL is decremented by one; if the TTL reaches zero before the packet reaches its destination, the packet is discarded and (optionally) an ICMP TTL exceeded message is sent to its source. MPLS labels also have a TTL field: 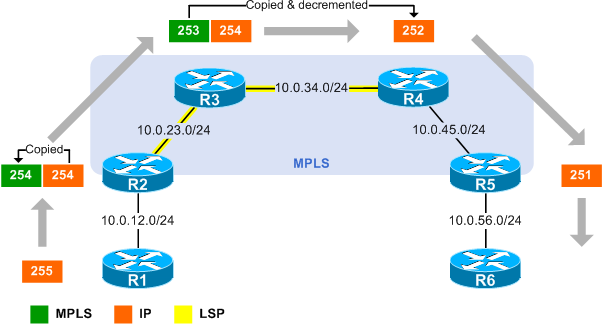 Cisco calls behavior this TTL propagation. Because the MPLS TTL is copied (or "propagated") from the IP TTL, a traceroute from R1 to R6 in the above topology will list every hop in the path, be it routed or label-switched. (Note that the final leg of the MPLS portion of the path, from R4 to R5, is not label-switched due to penultimate hop popping.) 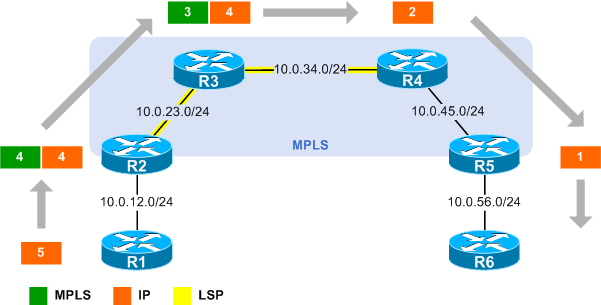 Cisco IOS provides the option to disable MPLS TTL propagation, with the no mpls ip propagate-ttl command under global configuration. If applied, this command should be applied to all routers in the MPLS domain.

With TTL propagation disabled, the MPLS TTL is calculated independent of the IP TTL, and the IP TTL remains constant for the length of the LSP. Because the MPLS TTL never drops to zero, none of the LSP hops (R2-R3 and R3-R4) trigger an ICMP TTL exceeded message and consequently these hops are not recorded in the traceroute from R1: 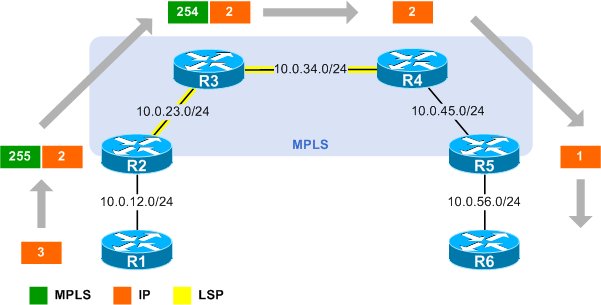 First of all congratulation for such a great site. I learned a lot reading article here today. I will make sure i visit this site once a day so i can learn more.

It is realy a good presentation to get the concept of

traceroute and no mpls ip propagate-ttl.

Tested this with vrf's did not work for me. I will be t/s it.

A lucid explanation of IP vs MPLS TTL concept via pictures. Thank you for a great site!

I had labbed this up and wondered why my last hop within the MPLS cloud was still showing up on the traceroute. I googled it and came here, and found the answer - penultimate hop popping. Of course, it all makes sense now!

The "challenge" intstead of captcha is wonderfull. Keep on pressing F5.

Great Explanation, better that I found in the internet

Your explanations are the to the point and clear. Great Job. I do come and visit this site every now and then.

soo clear about TTL in MPLS

Thank you and i am after you for further updates .

Thanks Stretch. Your explanation clears this for me. Appreciated you Sir.