While many of the current "green" trends in IT are hype, I'm pretty sure we can do better than this: 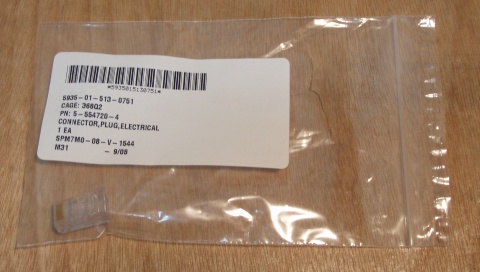 What you see here is an 8P8C (not RJ-45) connector, individually packaged and labeled. While sorting through storage at work the other day, I cam across an entire bag of these, probably about a hundred, all individually bagged and labeled. The manufacturer probably used about as much plastic for the packaging as for the connectors themselves.

Unfortunately there was no vendor name on the bag, so I can't say who to avoid purchasing from. I can only hope they get a clue.

And how would you package this? I agree with you that they could package them in packs of 10, 50, 100. But some makes are forced to label it all on each unit sell able. Look at the food industry.

It's the same at our place, but with patchcables; each one is individually packed. Moreover, one-time used, shaggy cables often go to the waste bin, because it's much easier to untie a new one..

Unfortunately there was no vendor name on the bag

Try searching the part number, it's the first hit on Google.

As a company we buy our connectors in bulk. On the good news fron tCisco has EcoPacks for access points. (Which took about 7000 years to figure out.) The amount of new never used trash from a single install was astounding.

Google the CAGE (The Commercial And Government Entity Code) number and you will be able to tell who the manufacturer is. I can't tell from the photo what the 2nd and 3rd numbers are. Probably packaged that way because of the contract with the manufacturer.

My shop here in Ramadi recently went through a span of time where if anyone called 8P8C connectors "RJ-45's" they were reprimanded. Just goes to show you what we consider fun. Also, I fear the day the Marine Corps gets a hold of these and puts them on our inventory list.

looks to my like a cisco label.. quite similar from the style ,-)

Yep, CAGE code is how you find this sort of information out (I'd post a link for a CAGE search tool but I'm not sure what Stretch's policy on that sort of thing might be). But go easy on them, though. In all likelihood every detail of packaging and labeling was spelled out in their contract with the government. Wasteful? Of course. Did the procurement folk involved have a clue about such things? Not likely in the least...

We have a vendor who sends monthly shipments of candy to our NOC to thank us for being a customer.

One month, they sent us two boxes of Jelly Belly jelly beans. After opening the box and the bag inside of it, we found 200 jelly beans -- with each bean individually wrapped in cellophane.

I wonder if someone had to wrap them by hand...

From my military experience, that one connector probably cost 200 bucks. :-)

If it's cisco i wouldn't be surprised, if you've ever bought memory from cisco, you'll know what i mean, bag inside a bag inside a box inside a bigger box, inside another box. shocking

We go through a lot of SFP LC GBics, and they always ship them to us in single units. its crazy, one 9x12 plastic bag with a 8.5x11 document in it telling us how not to kill ourselves with a GBic, and then the tiny little GBic in a little static bag. We probably have a couple hundred of these things, such a waste.

At least my company has a recycling program so its not a total loss.

There has been a run of these stories lately, mostly regarding HP or Dell. My favourite has to be - http://www.theregister.co.uk/2008/11/21/more_hp_packaging/

I was visiting a unit in Iraq back in 2004 when they got a shipment of connectors in. It was 500 of the above, the real kicker was that each one was also individually wrapped in paper. To bad we couldn't reach the Fraud, Waste and Abuse hotline out there....

Hi guys, i work for a cisco partner in italy and lately we've been selling lots of cisco CME systems to end customers. What you might consider interesting is that any ip phone comes with a license, and this license is merely a sheet of paper.

The bloody licenses took more room than the ip phones themselves goddammit!! :D