One of IPv6's key benefits over IPv4 is its capability for automatic interface addressing. By implementing the IEEE's 64-bit Extended Unique Identifier (EUI-64) format, a host can automatically assign itself a unique 64-bit IPv6 interface identifier without the need for manual configuration or DHCP. This is accomplished on Ethernet interfaces by referencing the already unique 48-bit MAC address, and reformatting that value to match the EUI-64 specification.

RFC 2373 dictates the conversion process, which can be described as having two steps. The first step is to convert the 48-bit MAC address to a 64-bit value. To do this, we break the MAC address into its two 24-bit halves: the Organizationally Unique Identifier (OUI) and the NIC specific part. The 16-bit hex value 0xFFFE is then inserted between these two halves to form a 64-bit address.

Why 0xFFFE? As explained in the IEEE's Guidelines for EUI-64 Registration Authority, this is a reserved value which equipment manufacturers cannot include in "real" EUI-64 address assignments. In other words, any EUI-64 address having 0xFFFE immediately following its OUI portion can be recognized as having been generated from an EUI-48 (or MAC) address.

The second step is to invert the universal/local (U/L) flag (bit 7) in the OUI portion of the address. Globally unique addresses assigned by the IEEE originally have this bit set to zero, indicating global uniqueness. Likewise, locally created addresses, such as those used for virtual interfaces or a MAC address manually configured by an administrator, will have this bit set to one. The U/L bit is inverted when using an EUI-64 address as an IPv6 interface ID. 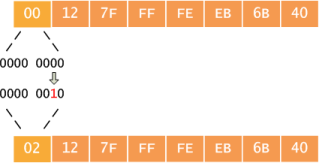 Again, you're probably wondering why this is done. The answer lies buried in section 2.5.1 of RFC 2373:

The motivation for inverting the "u" bit when forming the interface identifier is to make it easy for system administrators to hand configure local scope identifiers when hardware tokens are not available. This is expected to be case for serial links, tunnel end-points, etc. The alternative would have been for these to be of the form 0200:0:0:1, 0200:0:0:2, etc., instead of the much simpler ::1, ::2, etc.

We can see this conversion in action when we assign an IPv6 address to a router interface. First, take note of the interface's MAC address (this is typically the same as its burned-in address, or BIA).

After assigning an EUI-64-designated IPv6 address to the interface, we can verify that the interface ID has been drawn from the MAC address in the process described for both the assigned and the link local address:

Just in one word that is Superb

Very solid write-up. As always, thanks much.

There is a privacy issue with this method: You can identify the computer (and with that probably the user as well) wherever it connects. To address those privacy concerns, RFC 3041 was written, which got obsoleted by RFC 4941 (Privacy Extensions for Stateless Address Autoconfiguration in IPv6)

TREMENDOUS JOB OF EXPLAINING THIS NEW TOPIC THAT PERPLEXES EVERYONE !!! This is an excellent explanation. You should work for cisco !!!!!!!

This is the good explanation that i read for IPV6 address presentations. It is easy and explains to the point.

Very good explanation. Thanks a lot

Thanks for very good and easy to understand explanation! The world become much more beautiful ;)

Clear and concise explanation, this is great!!

This is a very clear, sharp, on the target explanation. Like it. Please keep up the good job.

Great article. I just wonder what if I have a MAC address beginning with somethings else than 00. Let's say AC:13:87:AF:B1:C7 ?

What do I have to do with the first byte?

re: first byte If I read this right, you invert that bit regardless. This can be acheived by xor'ing the first byte with 0x02.

I appredciate the explantion in simple terms. My query is what happens in serial links for which there is not MAC address. What will the EUI-64 interface identifier be ?

You know, this is the SECOND time I've used packetlife! You're bookmarked now!! (Really diggin' those big posters!). Your explaination of EUI-64 from MAC is awesome... I get it!! Thanks a bunch!!

or just add 0x02 as kjotte is saying but i didn't find an example with the actual calculation anywhere so i thougt to provide one ;-)

Better than Internetwork expert and nuggets - well done and thanks

not to be a pest but it confused me being new to ipv6 - it appears the address you made at the end is incorrect. That first E should be an F. No?

Great Stuff - you are bookmarked with other great bloggers I have found so far.

@Mike: No. It helps to read the article, particularly the paragraph which begins, "Why 0xFFFE?" ;)

It seems to work, but I am having a hard time understanding exactly what the difference is between the /64 and /65 designation.

Thanks in advance for responding,

@pottse: The /65 is most likely a typo. Autoconfigured EUI-64 addresses only work with /64 prefixes (as they're 64 bits in length).

Thankyou so much, perfect explanation!!!

The link you provide (http://standards.ieee.org/develop/regauth/tut/eui64.pdf) shows fffe and ffff in separated examples, can you elaborate on that?

Very good explanation. One question though, I am wondering about the following part,

Also, what is the significance of Global Unicast Address (2001:DB8::212:7FFF:FEEB:6B40) and why it is different from link local address?

Which one is the interface IP for f0/0?

Please reply. Thanks in advance !

This command sets the address of the interface to 2001:db8::/64, the parameter "eui-64" at the end of this command tells the router to generate the last 64 bits using EUI-64.

As to your other questions. Per IPv6 protocol, each interface MUST have a locally scoped IPv6 address (called a Link Local Address, or LLA). IANA has reserved FE80::/10 for this very purposes -- this network exists on EACH IPv6 link, all over the world, but is not allowed to be routed. Hence, when you enabled IPv6 on fe0/0 (by configuring an IPv6 address), your router automatically generated the (required) Link Local Address.

A Link Local Address is only valid on a particular link. Your router (using its Link Local Address) can speak to other machines on the same network (using their LLA), but it can't use its LLA address to speak across/beyond another router. To do that, it must use another type of address: Global Unicast address.

In short, a Link Local Address can only be used for local network communication, while a Global Unicast address can be used anywhere on the IPv6 Internet (to include the local network).

hi thanks a million i really like the way you've explained the EUI-64 :)

This explanation on EUI-64 addresses was exactly what the doctor ordered. Thank you. Concise wording and great images.

many many thanks for this post of yours. Its freaking awesome.

"In other words, any EUI-64 address having 0xFFFE immediately following its OUI portion can be recognized as having been generated from an EUI-48 (or MAC) address."

What would be the reason for such a distinction? Is there any particular reason?

Thanks in advance,
Animesh.

I have a major doubt.

I am clear on converting EUI48 to EUI64. With EUI-48 in mind, IEEE has kept the bits 0 and 1 of the first byte of the OUI always zero.

Now, you are saying the logical meaning of bit 1 in EUI64 is the opposite of the corresponding bit's meaning in EUI48. If that is the case, we should follow the same guideline of flipping this bit in creating fresh EUI-64s as well, and not just translating an EUI-48 to EUI-64. (For instance IEEE 802.15.4 uses EUI64). In essence, if the address is globally unique, the first byte of the EUI64 would be the first byte of OUI bitwise OR-ed with 0x02.

However, the IEEE guideline document on EUI64 (http://standards.ieee.org/develop/regauth/tut/eui64.pdf) says nothing of the sort. What's up with that?

thank god for you man.

while going through the topic "EUI-64 Interface ID Assignment" i was like "what is this thing"...thanks to you now its all clear syllable by syllable.
Great job.

Great article, easy to read. I now understand EUI 64! Thanks!

You explained this very confusing subject so clearly. Thank you!

What does [EUI/TEN] specify here? If IF is down, TEN shows up, when IF is up, TEN disappears. Thanks for the explanation.