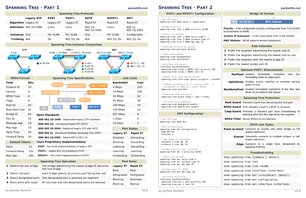 The old spanning tree cheat sheet had numerous problems (as dutifully pointed out by a number of readers), so I decided to rework it from scratch. Today I've uploaded the new STP cheat sheet, version 2.0.

The new sheet is two pages, expanded to include full IOS configuration examples of both PVST+ and MST. Through some amount of pain, I've also managed to draw up a specifications flow chart, illustrating the development of the various spanning tree protocols over the past decade or so. I felt this was important, as many people still refer to RSTP as 802.1w and MST as 802.1s, when in fact those supplements have been merged into the finalized 802.1D and 802.1Q standards, respectfully. It's also interesting to see how Cisco has developed their proprietary per-VLAN implementations in parallel to the open standards.

As always, feel free to download and distribute freely, and please let me know if you uncover any errors.

nice nice - this was needed !

The specifications flow chart is awesome. That clears up a very confusing topic

Awesome work man, I appreciate it. I always get confused with the whole STP process.. this will definitely help out with studying!

This is great man! My favorite one yet and just in time for my ICND2 cramming. Thanks!

Thanks for the work! These are absolutely fantastic, as usual!

There wasn't enough aggregate info to get trends :-(

"many people still refer to RSTP as 802.1w and MST as 802.1s, when in fact those supplements have been merged into the finalized 802.1D and 802.1Q standards, respectfully." Thanks for this but the reason everyone thinks this is that the Ciscopress books give out the wrong information which is very annoying.

Thank you for doing what the books and training courses don't.

Thank you very much!!

But maybe you could review new technology of STP. Its called as Per-VLAN Spanning-Tree Access Gateway (PVSTAG). I still dont understand in here.