Reader Marcus suggested an extension of last week's post on configuring wired 802.1X discussing the use of a guest VLAN. 802.1X includes the capability of defining a guest VLAN in which unauthenticated clients are placed. This can be handy to provide a sort of user-facing demilitarized zone, where guests can connect to the network but only to receive limited services, or to provide temporary restricted access to download software updates.

Configuring a guest VLAN is simple, so long as you understand the concept. We'll continue from the previous example, adding a guest VLAN with access only to the Internet, as depicted here: 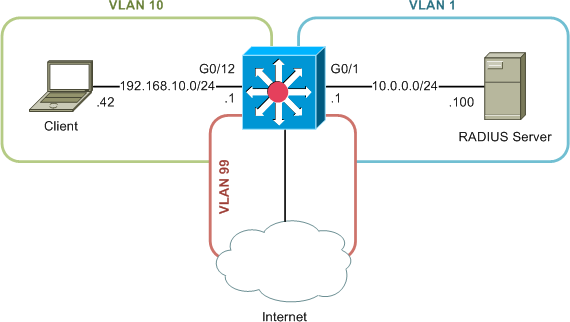 This time, however, we'll assume our client is not 802.1X-capable (if continuing from the previous lab, be sure to disable 802.1X authentication under the network connection properties dialog). Configuring a guest VLAN is as simple as defining the VLAN number appropriately under the desired 802.1X interfaces:

We can see VLAN 99 specified as the guest VLAN under the interface's 802.1X properties.

Now we can connect our client. The switch will prompt for authentication but, receiving no response, will eventually (after roughly 90 seconds) give up and place the client in the guest VLAN.

The unauthenticated client can now only send traffic to VLAN 99; it will have to authenticate successfully before it can be placed in its permanent VLAN, VLAN 10.

Great write up! Thanks

I've found you've got to tweak the authentication timers and retries for Guest VLAN access. Many times the client will assign itself a 169.254.x.x address before the switch decides put the PC in the guest VLAN. I've found the following works well:

Thanks...i was just trying to explain this to a colleague

I am interested in knowing how do you draw those beautiful topology diagrams :-)

only this web site clear my doubt about dot1x auth-fail vlan .

Big Thanks from my Heart