One common misconception regarding VLANs is that they are significant beyond a single switch. Of course, VLAN numbers have to match for trunking to work, and VTP can be used to automatically propagate VLAN information. However, a VLAN, being essentially little more than a number, is significant only within a device. Consider the following scenario: 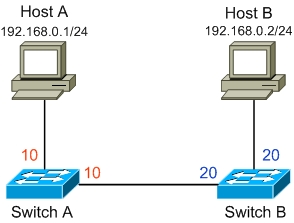 The answer is yes. Follow the path of a frame leaving host A destined for host B. Switch A receives this frame on a port in VLAN 10, so it can only egress out another port in VLAN 10 or a trunk port. It performs the usual MAC lookup to determine the appropriate outbound port is its link to switch B. Now, here's the key: the frame is forwarded to switch B without a VLAN tag, because this is an access port. Switch B receives the frame on an interface it considers VLAN 20 and performs the same switching decision to forward the frame to host B.

So, does it work? Yep! Is it a good idea? Probably not. In an instance where VLANs are used, you're probably using more than one. For this reason and others, it's recommended to always trunk between switches using IEEE 802.1q or (less favorably) Cisco ISL.

Great, simple explanation. I think the site is great, keep posting. I also was in the AF, AFSC 2A452. I would imagine the pay jump from enlisted to contractor was very nice... :)

Great tutorial. One of the best sites. Keep it up

This kind of design is very dangerous when one uses PVSTP because PVSTP BPDUs carry VLAN number they belong to inside themselves and VLAN number mismatch on access interfaces leads to error disable state of those interfaces.

Well this seems innocuous but this caused a big problem at my work. Due to some undocumented change, one of the trunk link between two switches were changed to access port, each switch port being assigned to a different Vlan.

When end hosts in Vlan A booted up, the DHCP packets traveled up the mis-configured access port and reached DHCP server in Vlan B. As a result, quite a few hosts (supposed to be) in Vlan A got kicked out from the LAN and got assigned a Vlan B IP address. Luckily it was just a couple of printers and a PC, but it had the potential to be a bigger issue.

Hi What happens if a second link is connected between the two switches with exactly the same vlan configuration ( access vlan 10 - access vlan 20) Will spanning tree works to block one link? Which link will be selected to pass traffic